Corsets in the Early 20th Century

The ideal figure in the early 20th century was more statuesque than its Victorian predecessors. Rather than focusing on the waist, more attention was paid to the other parts of the body - smooth long hips and a swelling chest. By 1910, corsets were cut so long that they reached well over the thighs. They also tended to be shaped very low around the bust line so women would need more support on top - if at least to preserve decency with the low-cut evening dresses of the time. 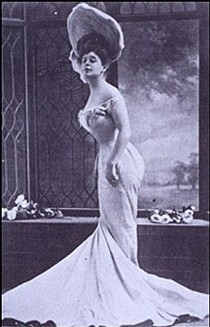 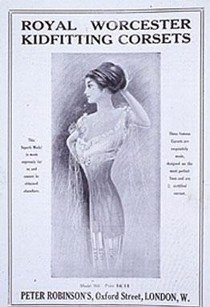 Various methods were tried and tested to achieve a full and swelling bosom, as portrayed in the photograph of Miss Camille Clifford. Artificial aids to increase the size of the breast were in theory not new. Cotton wadding and pads had been for a long time sewn inside the dress to help build up the figure and during the 1860s bust pads made of rubber helped give an impression of curvaceousness where nature failed.

Even more unusual was the ingenious 'lemon cup' bust improver of the 1890s.Each cotton cup was packed with a pad of horsehair containing a coiled spring. The springs were anchored onto horizontal whalebone strips so when the improver was worn, the breasts would push the pads out to create the impression of a fuller bust.

What was new about the 1900s was the range of inventions available, and also the fact that artificial beauty aids had become much more acceptable. For many women the superb physical proportions and statuesque curves dictated by fashion simply had to be achieved no matter what the methods.

Women's journals of the time were replete with advertisements for pills and potions to correct flaws in the female appearance. Bust cream applied as a massage, claimed to 'permanently develop and enlarge the bust, cause it to fill out to nature's full bearing, give that swelling, rounded, firm white bosom, that queenly bearing, so attractive to the opposite sex'. Widely advertised in France, 'pillules orientales' were supposed to have a similar effect. If pills and potions failed there was always the 'Princess Bust Developer' which exercised the muscles of the bust by suction, restoring the capillary action and getting rid of flabby tissue.

Bust bodices were less intimidating and also became more common. These were lightly boned and tended to conceal the cleavage, creating the monobosom, a long, sloping sine-curve. Some could be worn over the corset to complement the structure of the dress and create the desired silhouette. Padded camisoles were also popular and 'pneumatic bust forms' are also referred to which claimed to be as light as air and promised to give the wearer 'the admirable and superb proportions of the ideal figure'.

These devices probably led to the development of the brassiere a few years later, as the basic concept and design is quite similar. The 'bust bodice' to the right, for example, is styled like a bra beneath its frilly flounces. Although it is laced up the back like a corset, vertical whalebone strips run down the inside of the front section, creating two cups.

By 1910 designers were beginning to reject what had been the starting point for dress design - the full figure with a constricted waist. Leading new lights of the fashion world such as Paul Poiret, Lucile (Lady Duff Gordon) and Jacques Doucet reacted against the artificially exaggerated Edwardian curves and promoted instead a slimmer, less restricted silhouette. They designed clothes that defined the more natural contours of the body. Blouses and high-waisted dresses made of delicate, soft, flowing materials did not require rigid corsets, steel hoops and bustles to give them their shape. 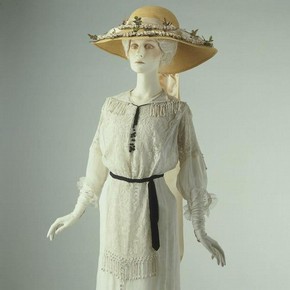 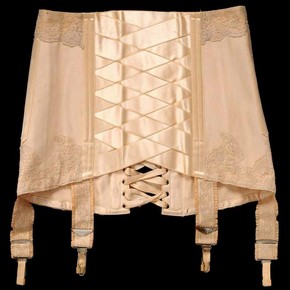 Of course corsetry did not disappear overnight but the desire for the natural uncorseted effect resulted in the development of lightly boned and flexible corsets or brassieres. The 'Tango' corset, for example, was made for dancing in. It would have been worn over the hips, freeing the waist from the restriction of a tightly laced corset. The wide criss-crossing ribbons which comprise the front panel added to the overall suppleness and ensured freedom of movement. The First World War hastened these changes and helped bring about fresh attitudes. The increasing number of women going out to work or helping with the war effort needed to be able to move more freely. There was no place in their lives for sweeping skirts or S-shaped curves moulded by heavily boned corsets.

Lucy Johnston is a curator of fashion from 1800 to 1914 and wedding dress in the V&A's Department of Furniture, Textiles and Fashion. Her published work includes Nineteenth Century Fashion in Detail (2005) and Shoes (1999), which she co-authored with Linda Woolley. Suzanne Lussier graduated with an MA in the History of Dress from the Courtauld Institute and now works as a fashion curator at the V&A. She is the author of Art Deco Fashion (2003) and Art Déco: la mode (2003).