Crinolines, Crinolettes, Bustles and Corsets from 1860-80

From 1866 the crinoline craze began to subside. In this year the magazine Le Follet announced: 'The size of the crinoline is very sensibly diminished, but it cannot be altogether dispensed with while the dresses are so very long'. This helps account for the small size of many crinolines in the Victoria and Albert Museum's collection, for example the red Thomson's crinoline of 1867. Punch, not to miss an opportunity for humour, anticipated a new use for discarded crinolines - as plant protectors during the winter!

They were fashionable between 1867 and the mid 1870s. They were often composed of half hoops with extra loops of steel at the top to give more support. Some were laced inside like a corset. This lacing, combined with the tying of internal tapes, enabled the shape of the structure to be adjusted.

During the 1870s the bustle became a separate undergarment in its own right. The new form of bustle was known as a 'dress-improver', or by its French name 'tournure' as the word bustle was considered vulgar in polite society. Bustles were often stiffened with horsehair to retain their shape and give form to the dress. Sculpted pleats and ruffles were very popular, as was the 'waterfall' bustle which cascaded down the back of the dress. Like the crinolettes some had corset style lacing and most had tapes for attaching around the waist and petticoat. 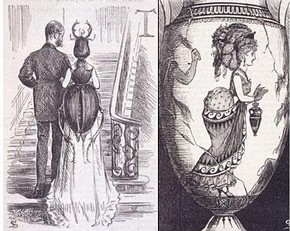 Crinolettes and bustles were probably more restrictive than crinolines. The flat front and tapes fastened around the body made ease of movement less easy. The problems of sitting down could usually be overcome by pushing the bustle to one side or sitting forward in a seat. Punch cartoons poked fun at this fashion, comparing women with their bustle shapes behind to beetles and snails.

As the skirts became narrower and flatter in front more emphasis was placed on the waist and hips. A corset was therefore needed which would help mould the body to the desired shape. This was achieved through making them longer and from more separate shaped pieces of fabric than the corsets of the 1840s. To increase rigidity they were reinforced with many strips of whalebone, or cording or even pieces of leather. As well as making corsets more constricting, this heavy structure helped prevent them riding up or wrinkling at the waist.

Steam-moulding also helped create a curvaceous contour. Developed by Edwin Izod in the late 1860s and still used in the 1880s to create elegant corsets, the procedure involved placing a corset, wet with starch, on a steam heated copper torso form until it dried into shape. Another technological invention was the 'spoon busk', which was invented in about 1873. Its distinctive shape was heralded as an important innovation, increasing comfort, preserving health, reducing unsightly bulges and enhancing the figure. It appeared in fashionable models until the 1890s and was known by other imaginative names such as ‘pear’, ‘envelope’ and ‘patent taper busk’. 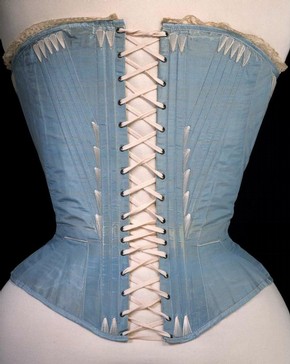 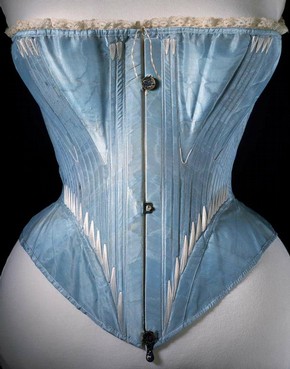 There were even worse accusations thrown against the corset. Journals much as the English Woman's Domestic Magazine devoted space to a whole run of dubious letters on the subject of tight lacing - some of which claimed that waists were reduced through corset to 38 centimeters (15 inches) and that girls were forced to wear corsets at night as well as during the daytime. Doctors and medical writers cited countless diseases caused by corsets, which included consumption, curvature of the spine, rib displacement, cancer, hysteria, hunchback, abortion, melancholy and epilepsy. In addition, although corsets were considered by many to be good for the morals, they were also criticized for titillating qualities, especially when used in erotic literature.

But one should take care when analysing these accusations. Although it is clear that some people laced their corsets very tightly, and there are horror stories of damage done to the internal organs, extreme tight-lacing was probably the exception rather than the rule. Ordinary people probably adapted the tightness of their corsets for the occasion - lacing them looser when they expected to be more active such as at dances or out walking. They would also wear models which were less heavily boned during pregnancy or when engaged in sporting activities such as riding.

It has been suggested that although wearing corsets from a young age was uncomfortable and restricting there is no real evidence to support claims of corset-induced diseases. Although extremely unpleasant, the worst side-effects were probably discomfort, muscle weakness, breathing, circulatory, respiratory and digestive problems. The Queen of 1880 refers to the more probable ailments corset wearers were likely to suffer which included: 'nervous headaches, feelings of "sinking" which call for strong tea or coffee, or sherry; back aches and pains in the sides, indigestion and poor appetite, short breath and imperfect circulation, cold hands and feet (and even red noses).'

Lucy Johnston is a curator of fashion from 1800 to 1914 and wedding dress in the V&A’s Department of Furniture, Textiles and Fashion. Her published work includes Nineteenth Century Fashion in Detail (2005) and Shoes (1999), which she co-authored with Linda Woolley.