Keith Harrison was born in West Bromwich in the Black Country and from the age of 8 grew up in Birmingham. He didn’t intend or expect to be a ceramicist and in a bizarre set of circumstances was banned from the Ceramics room on the first day of his Art Foundation Course in Bournville. Whilst on the BA Industrial Design course at Cardiff he enjoyed the freedom and versatility of clay during one of the projects and later switched courses to Ceramics. Keith completed an MA in Ceramics and Glass at the RCA in 2002.

Since 2002 Keith has been involved in a series of process-based live public experiments that investigate the direct physical transformation of clay from a raw state utilising industrial and domestic electrical systems. The use of portable household appliances has enabled live firings to take place in alternative venues such as a living room, science laboratory, café and not-for-profit artist run spaces in Brighton and London. In addition, large-scale works have been realised for public galleries and Museums including the V&A, Jerwood Space, Camden Arts Centre and mima, Middlesbrough which take on the given space to produce site-specific time-based works.

The exploration of possibilities for a wider ranging sensory experience of the firing process other than heat began in 2007 with the work ‘20 Whittington Street’ at Camden Arts Centre. A living room carpet made from chapatti bread dough and spices heated underneath until the smell became unbearable for the audience in the gallery space. ‘Float’ commissioned for Jerwood Open Makers in 2011 was a large-scale culmination of a sequence of smaller scale works and experiments involving sound in conjunction with clay and electricity and included ‘Blue Monday/White Label’ (Landmark, Bergen, 2010), ‘Brother’ (mima, Middlesbrough, 2009) and ‘Grand’ (Permanent Gallery, Brighton, 2008).

In the realisation of past works Keith has received the support of a Gasworks/Arts Council International Artists’ Fellowship in 2004, Arts Council England Grant for the Arts in 2006, AHRC Small Grants Award in 2007, Henry Moore Foundation Award in 2009 and the Jerwood Makers Open Commission in 2011.

Keith has undertaken residencies previously at KHOJ, New Delhi in 2003 and at Burton Museum & Art Gallery in 2002.

Since 2002, Keith has been part-time Senior Lecturer at Bath School of Art and Design and Visiting Lecturer at a number of Art Schools in the UK and Europe.

I am interested in the opportunities that clay offers in its different states; as a liquid, plastic and solid and, ultimately, the potential for the direct physical transformation of clay from a raw state utilising industrial and domestic electrical systems in a series of time-based public experiments.

Clay is treated generally inappropriately and variously applied onto an electrical host form. The resulting works are wilfully idealistic and impractical attempts to permanently change, in full or in part, the properties of clay or in combination with other raw materials produce a temporary sensory alteration such as the generation of sound or an aroma to fill a space.

In contrast to the unpredictable processes of transformation, the dimensions of works are carefully defined and taken from a range of sources including a fitted carpet, 12’’ vinyl records and terrorist bomb targets. A colour coding system has been re-appropriated in a number of previous works to commemorate significant public or private dates.

Ideas are triggered at unlikely moments by a film, a conversation or a new opportunity. These are initially explored through drawing as an attempt to bridge the gap between the open possibilities and freedom of an imagined two-dimensional space and the physical realities of clay and three-dimensions.

I am continually intrigued by the simultaneous activities of making and destroying and manipulating the public's role in the observation of this process. I produce works that are located somewhere between the grim fascination of a car crash, the formality and unpredictability of a scientific laboratory experiment and a wedding night disco. 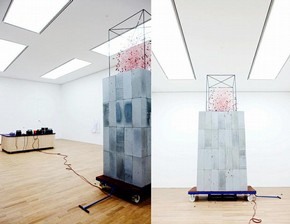 Recent influences are post-war Modernist architecture and in particular the tower blocks tiled in vivid blue and yellow situated at the edge of the Bustlehome Estate in West Bromwich where I was born. Now demolished in parts and re-clad in others, I am interested in these buildings and more generally the radical social agenda for state architecture of the 1960's relating to comprehensive schools and housing.

Related to this is an interest in the architecture of Berthold Lubetkin and the Tecton group’s ground-breaking animal enclosures for London, Whipsnade and Dudley Zoo. The notion of social observation of captive animals as a recreational pursuit seems an unintentional form of live performance and analogous to the situation of being an artist in residence in a public cultural arena. This visible process has the potential for exploration, and perhaps exploitation, of the situation of observing and being observed and is influenced by the Peckham Experiment: a public health project in the 1930's monitoring Working class families in the Peckham community.

Exhibitions I saw at the Ikon Gallery whilst growing up in Birmingham, including early shows for Argentinian artist Victor Grippo, and Cornelia Parker, Arte Povera, the auto-destructive works of Gustav Metzger and the social sculpture of Joseph Beuys have all had an impact on what I do and why. More broadly I am influenced by the social realist TV drama of Ken Loach and Alan Bleasdale's 'Boys from the Blackstuff', the films of David Lynch and Werner Herzog's 'Fitzcarraldo', Northern Soul, Jah Shaka, Keith Moon, Peter Saville’s New Order Album sleeves, left-wing politics and the public lectures of Michael Faraday at the Royal Institute. 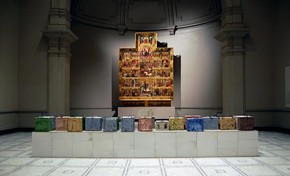 I have an interest in the clay works held across the V&A's collections, encompassing not only the specialist Ceramics Galleries but also Sculpture and Architecture.

Under the overarching title of ‘Secondary Modernism’, I used the residency at the V&A to pursue new ways to explore the transformative potential of clay and electricity in both a material and social sense. It was also an opportunity to develop new approaches to my practice in a new and stimulating environment.

Keith Harrison: The inspiration for the Moon performance came from initially Keith Moons drum kit. I was interested as a sculptural piece, its combination of form and increasingly looking at his performances and The Who's decision at the end of concerts to breaking up their instruments. It was very attractive to me in terms of making and unmaking or destroying something that you've created.

Keith's Bustleholme project was to be his final statement of his residency. Continuing his working relationship with Napalm Death, Bustleholme would pit sound against structure in a ferocious statement on inequality and urban decay. Unfortunately it was not possible to present this performance at the V&A, but it took place in November 2013, in the appropriate surroundings of the De La Warr Pavilion in Bexhill on Sea.

This Residency was supported by Maurice and Rosemary Lambert.