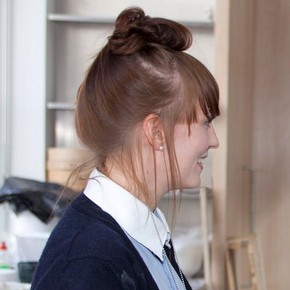 Phoebe Cummings was the V&A's ceramics artist-in-residence from June-December 2010. Since graduating from the Royal College of Art in 2005 she has undertaken a number of residencies, projects and exhibitions in the UK, USA and Greenland.

You can read her residency blog to find out more about her work and creative processes.

Phoebe wrote about her work and sources of inspiration:

Working predominantly from unfired clay, I constructed pieces directly on site as temporary installations or interventions within a place. The interplay between reality and fiction, and relationships between objects, landscape and place were explored. Both material and process were of particular significance, with the intensive labour of making heightened by the temporal eventuality of the work's existence. Often the pieces came to exist only as a photograph or memory.

Interest in the V&A collections

During the residency I researched the way landscape and nature have been represented historically through ceramic objects in the V&A collections, with particular attention to 19th century transfer printed tableware. I am interested in the way landscape has been consumed through objects, presenting idealised visions of nature and responding to the desire for the picturesque, exotic and somewhere other.

My practice was not based in a fixed studio space, so there was little separation between my working process, the place, and the work that emerged and disappeared there. During my residency at the V&A, I used the studio space and its contents to create an ongoing installation from clay.  From this unique space in the museum I created a changing environment that both responded and belonged to the collection, presenting an alternative reference to time, material and place.

Clay as a material remained central to my work, as I responded to the immediacy of its manipulation and changing, transformative properties. In its unfired state there was the possibility for endless remaking of the same matter. The work usually responded specifically to the site, drawing on its histories and associations as well as the routines and patterns of time that were observed there daily. Written descriptions, archived photographs, maps, collected objects and materials all informed my recent work.

Phoebe Cummings graduated from the University of Brighton in 2002 where she studied Three-Dimensional Crafts, specialising in ceramics and metal.  She continued her studies at the Royal College of Art, completing an MA in Ceramics & Glass in 2005. Since graduating she has undertaken a number of artist residencies in the UK, Greenland and USA, as well as exhibiting and becoming involved in various projects and commissions. During a two-month residency at Upernavik Museum, Greenland she researched and developed work for an exhibition 'The Void Ratio' held in Newcastle-Upon-Tyne.  In 2008, she spent 3 months as artist-in-residence at the Kohler Co. factory in Wisconsin as part of their Arts/Industry programme supported through the John Michael Kohler Arts Center.  Other residencies have involved creating site-specific works at Bolwick Hall, Norfolk and I-park, Connecticut.