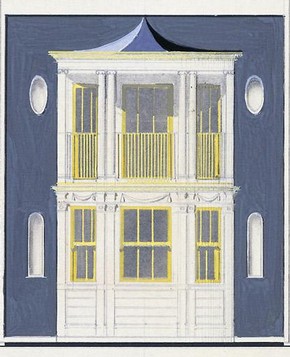 Berthold Lubetkin (1901-1990) was a pioneering architect of the Modernist movement in Britain. Originally from Russia, he settled in London and formed the influential architectural collective Tecton, with Denys Lasdun, Godfrey Samuel and Lindsay Drake among others. Tecton was responsible for designing some of the most iconic buildings in London, including Highpoint, London Zoo, and the Finsbury Health Centre.

It was near the end of Tecton's life, in 1947, that Lubetkin was commissioned to be master planner and chief architect for Peterlee new town. Peterlee, in County Durham, was to house 30,000 residents in the coalfields. Lubetkin was inspired, writing in 1948 'It is a dream of our time. In the midst of national austerity, we are going to build a new town, lock, stock and barrel'. His absorbtion in the project would lead to the break-up of Tecton, but Lubetkin was convinced that this project would be his greatest achievement.

These alternative designs for prefabricated house fronts were devised for the 100 Houses Scheme at Thorntree Gill on the outskirts of the Peterlee New Town Development. The land in this area was badly affected by subsidence and it was necessary for the housing to be built on prefabricated concrete troughs or shells rather than using conventional foundations. The purpose of these designs for house fronts was to demonstrate to the planning committee how different facades might be applied to the prefabricated housing shells. It was a theoretical exercise, none were specifically intended to be used, the intention was to gain approval for the principal of the scheme. 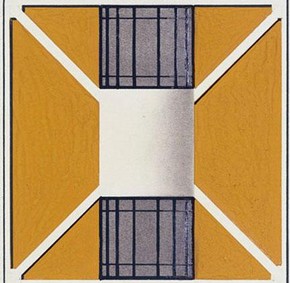 Sadly, this would not prove to be the case. The National Coal Board was to continue mining under the site for several years and insisted on a low density development to minimise the risk of subsidence. Lubetkin refused to compromise his plan for highrise blocks at the centre of the scheme and resigned from the project in 1949. Angry and bitter, he moved to Gloucestershire to manage a farm and, although he continued to develop ideas, found that his style of architecture was no longer as popular as it had been. As one contemporary commented 'Lubetkin had finally met his Peterloo'. In 1982, the Royal Institute of British Architects (RIBA) recognised his huge achievements by awarding him the Royal Gold Medal. Subsequently, he would give much of his archive to the RIBA Drawings and Archives Collections, where they are still kept.

These drawings can be found in the RIBA Architecture Study Room at the V&A.

For additional objects by Lubetkin and Tecton in the RIBA Drawings Collection search www.ribapix.com or www.architecture.com/LibraryDrawingsAndPhotographs/RIBALibrary/Catalogue.aspx