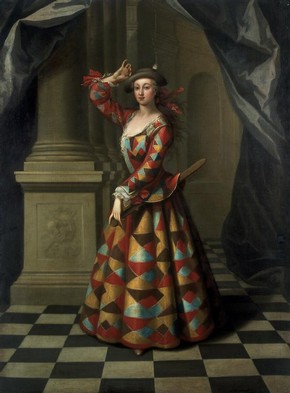 Hester Booth was just 16 years old when she made her debut at Drury Lane theatre on 28 February 1706. Her speciality was the Harlequin dance and she was so popular that she had her picture painted on snuffbox lids. Harlequin, a character from the Italian commedia dell’arte was a hugely popular figure, a comic, clever servant who could manipulate a situation to his (or her) advantage. Harlequins wore costumes with brightly coloured patches that later became diamond shaped.

Hester Booth also took part in one of the most significant ballets of her day, creating the role of Venus in John Weaver’s 'The Loves of Mars and Venus', at Drury Lane in 1717. This was the first ‘ballet d’action’, in which mimed passages of ‘conversation’ alternated with danced episodes.

Hester Booth was not just a dancer but also a singer and a talented actress. Another role for which she was well known was Cordelia, the youngest daughter in Shakespeare’s play 'King Lear'.

In this picture Hester is portrayed as a female Harlequin. Usually Harlequin was a male servant but female Harlequins appear in France from about 1695. In her hand is the slap stick. This was Harlequin’s trademark magic bat, used for beating people in a comedy chase. It was also used to magically transform the scenery by hitting hinged flaps. ‘Slapstick’ comedy, the physical, buffooning type of humour, takes its name from Harlequin’s bat. 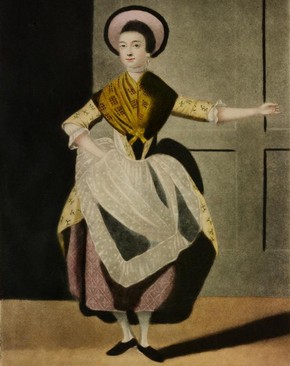 Nancy Dawson did not appear on the stage until she was 29 years old. She is remembered for just one famous dance – the hornpipe – which she performed in 'The Beggar’s Opera' at the Theatre Royal, Covent Garden in 1759. Her hornpipe dancing has been immortalised by a ballad, sung to the tune of Here we Go Round the Mulberry Bush.

Of all the girls in our town,
The black, the fair, the brown,
Who dance and prance it up and down,
There’s none like Nancy Dawson.

Her easy mien, her step so neat,
She foots, she trips, she looks so sweet,
Her every motion is complete,
I die for Nancy Dawson.

See how the Op’ra takes a run,
Exceeding Hamlet, Lear or Lun,
Though in it there would be no fun,
Was’t not for Nancy Dawson.

Though Garrick he had had his day,
And forc’d the town his laws t’obey,
Now Johnny Rich is come in play,
With help of Nancy Dawson. 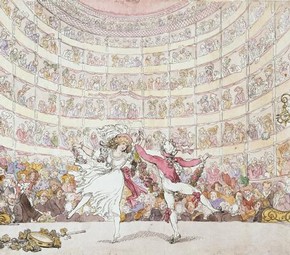 Dance in music halls and variety

By the 1890s there was a huge increase in the popularity of social and folk dance forms. Many working class dances were taken up by members of high society and dancing lessons became fashionable. Society ladies began to learn folk dances such as jigs, hornpipes, Spanish dance and step dancing.

Many different types of dance evolved on the stages of popular theatres in the 19th century. In the 1870s and 1880s skirt dancing was the fashion. Tap dancing and soft shoe routines were made popular by the black musical 'In Dahomey' and other American musicals to visit London.

For a time dancers dressed as Dutch girls and clog dances were popular, as was the adagio act. This was a mix of dance and acrobatics, where a girl was lifted, thrown or swung by her partners in an exhilarating but dangerous routine.

The term ‘eccentric dance’ on a music hall programme hid a wide range of styles. One emphasised the dancers’ legs, high kicking or out of control, often referred to as ‘legmania’.

In the 20th century Max Wall was known for his out of control lanky legs. Wilson, Keppel and Betty, also qualified as eccentric dancers. They were two decrepit, extremely thin men who performed a spoof sand dance, in vaguely Egyptian or Oriental style, wearing what appeared to be short nightshirts with tea towel headdresses or a fez.

When they performed in Berlin in the 1930s, wearing shorter skirts, Goebbels complained that their bare legs were undermining the morals of Nazi youth. There were several Bettys (the original, her daughter and her daughter) who always had to appear glamorous, but Wilson and Keppel became more and more decrepit.

Ballet at the Alhambra and Empire theatres 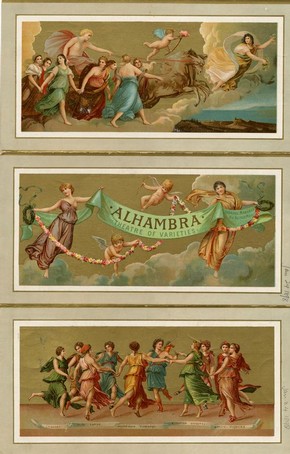 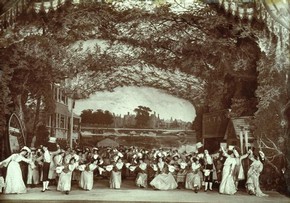 The Cakewalk at the Alhambra, 1904

After the Romantic era, ballet was replaced by opera as the fashionable entertainment, and singer Jenny Lind became the new star. Ballet found a home in the music halls.

At the  Alhambra and Empire theatres, Italian ballerinas appeared as guest performers. Male dancers did not feature on the stage and male roles were performed by women dressed as men. This was known as appearing en travestie.

By the end of the 19th century, ballet was a popular draw at the rival Alhambra and Empire theatres which stood on adjoining sides of Leicester Square, in London. These were full-scale ballets, and both theatres spent a great deal of money on bringing in famous dancers from abroad. Some of the ballets had topical and contemporary themes. Our Crown was choreographed for King Edward’s coronation and others had light-hearted themes such as Seaside and High Jinks.

The Alhambra stood on the east side of Leicester Square, a grand Moorish-style building with two minarets and a huge fountain under the central dome. Originally built in 1854 to display scientific discoveries, the Alhambra became a music hall in 1860. It boasted appearances by some of the most famous performers of the day: the tightrope walker Blondin and Jules Léotard with his new invention, the flying trapeze.

Like its rival the Empire, it became famous for its spectacular ballets and the prostitutes, who plied for custom in the auditorium. The playwright George Bernard Shaw described the Alhambra music hall as 'a huge circular theatre, lighted by small lamps arranged in continuous lines around the auditorium ... The atmosphere was hot, and flavoured with gas, cigar smoke and effervescing liquors.'

At the Empire, the ballets were overseen by the designer Wilhelm. Wilhelm also devised many of the story lines for his shows and was concerned that all the individual elements of a production were brought together in a stylistic whole.

Ballet at the Empire and Alhambra declined during World War I (1914–18), and both theatres were eventually demolished. The last dancers to appear at the Empire were Fred Astaire and his sister Adèle. 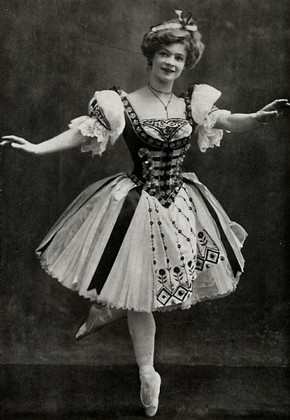 Adeline Genée’s style of dance suited the light-hearted nature of music hall ballet. She made her first appearance in London at the Empire Theatre in 1897 and was its star for ten years.

Trained by her uncle in Denmark, she danced in his touring ballet company as a child. When she came to London she had already danced as guest ballerina at the opera houses in Munich and Berlin. It is as Swanilda in 'Coppélia' that she is best remembered. Her style and technique were said to have been near perfection, and she was responsible for ballet becoming very popular in London. Diaghilev saw her dance in 1911, and was so impressed that he offered her a contract to dance with his company, but she declined.

In 1906 Adeline Genée requested that the Empire Theatre put on 'Coppelia' so that she could dance the role of Swanilda. As in the original French production, Franz was played by a girl dressed as a boy. Although London audiences loved ballet, there was great prejudice against male dancers – the public would only tolerate them in character roles, like Dr Coppélius.

In America Genée danced in musical spectaculars – ballet in its own right was unknown there at the time. She also toured Australia. In both countries she generated huge public interest in ballet. Adeline retired as a dancer in 1917. In 1920 she was active in setting up what is now the Royal Academy of Dance, to establish proper ballet teaching in Britain. She retired as president in 1954 and was succeeded by Margot Fonteyn, but remained on the committee till she died at the age of 92 in 1970. 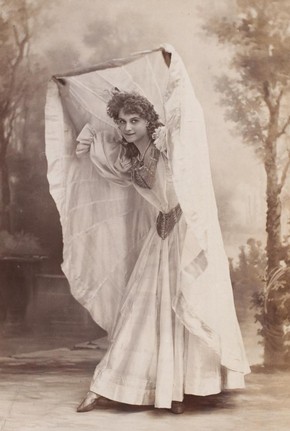 Skirt dancing was made famous by Kate Vaughan in the 1880s. The dance was based on the graceful manipulation of the skirts, which could contain up to 12 metres of fabric.

Skirt dancing was thought to be refined, tasteful and tantalizing. It was said that the motion of skirts rippled like the froth on the sea (such were the voluminous underskirts that Victorian ladies wore). Because it was less specialised and more lady-like than many dance forms, society ladies were able to learn the skirt dance as drawing room entertainment.

Skirt dancing was developed by individual dancers each adding their own style to the dance. When Lettie Lind danced in America in 1888 the critics were surprised to see a dancer who did not show her legs and breasts. In the 1890s skirt dancing became wilder. There was a craze for the Can-Can and some skirt dancers, like Katie Seymour, incorporated high kicks into their routine. Some people thought this was a vulgar version of the graceful skirt dance. Lottie Collins devised her own cross between skirt dancing and the Can-Can in her performance of her hit song, ‘Ta-ra-ra-boom-de-ay’.

The manipulation of yards of fabric was developed by later performers, most notably Loie Fuller. She extended her arms using long wooden wands to which the fabric was fixed. When she moved the wands the lighting changed colour over the flowing fabric, creating beautiful shapes, that were immortalised as figurines and lamps by Art Nouveau designers. Other dancers used electric lighting within the costumes. Marie Leyton danced against a Black Background so that the illuminations in her costume could be seen. This was called the Electrical Serpent Dance. 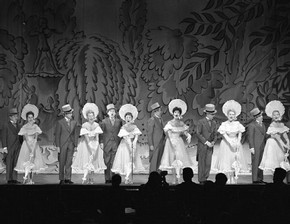 John Tiller was born in Blackpool in 1854 and learnt to clog dance as a boy. He later started a theatre school in Manchester. By 1895 he managed several troupes of dancers. Each troupe was slightly different but all of them performed the same style of formation dancing in which the girls were grouped according to height. Each troupe had a distinct personality or theme. There was the Fairy Troupe, Tiller’s Troubadours, the Forget-me-nots, Tiller’s Mascots and the Rainbow Troupe. Dressed in similar costumes they all performed high kicks, cartwheels and the splits as part of their routines.

Tiller’s empire grew rapidly, such was the demand for his girls. He soon had two residential schools and almost 300 girls in training, mostly young, pretty and conscientious girls from poor backgrounds. In addition to training girls to perform in the Tiller Troupes he supplied individual dancers to troupes in Paris and Berlin. In 1912 the Palace Troupe appeared before the King and Queen at the first Royal Variety Performance.

The Tiller Girls appeared in variety shows all over Britain in the 20th century. Even when variety went into decline, they were a regular feature of the televised stage show Sunday Night at the London Palladium. Betty Boothroyd, the first woman Speaker of the House of Commons, was a Tiller Girl.