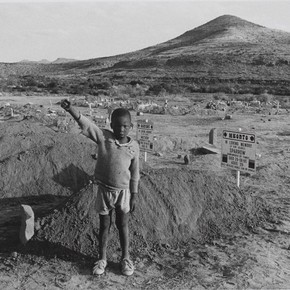 In 1987, David Goldblatt gave 115 of his prints to the V&A, a generous gift which now forms the main part of the V&A’s Goldblatt collection. The photographs had toured several venues in the UK during the 1980s in an exhibition organised by the Side Gallery, Newcastle. With the exhibition coming to an end and the political circumstances in South Africa worsening, Goldblatt felt the need to secure his photographs in a safe, though publicly accessible, place outside his country. The letter Goldblatt wrote to former Senior Curator of Photographs at the V&A, Mark Haworth-Booth, not only explains the reasons for his gift, but also documents the severe concerns Goldblatt felt about the future of his country:

‘Obstinately, and probably unrealistically, I still believe that this can become as reasonably ‘just’ a society as can be hoped for, and that the transition to that distant state might happen without catastrophic conflict. Increasingly however, that belief is becoming baseless. In the face of the awful things happening here and the worse that are very possible it is ridiculous to be concerned with anything as paltry as photographs. But I am. And it seems to me that considering their vulnerability to destruction, it might one day be useful and even valuable to have a fairly wide ranging collection of photographs from South Africa, such as this exhibition, housed outside this country in a museum which is publicly accessible and as likely to be permanent as any institution can be. Hence the V&A’.
David Goldblatt in his letter to Mark Haworth-Booth, former Senior Curator of Photographs at the V&A, 6 January 1987. 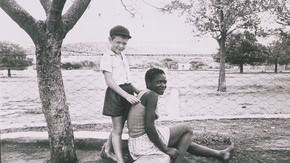 David Goldblatt, 'A farmer’s son with his nursemaid, on the farm Heimweeberg, near Nietverdiend in the Marico Bushveld' Transvaal, South Africa, December 1964, gelatin-silver print. Museum no. E.12-1992, © Victoria and Albert Museum, London

David Goldblatt was born in 1930 in the mining town of Randfontein close to Johannesburg. Since the late 1940s, he has photographed the social and physical landscape of South Africa. The V&A holds 125 of his photographs in total, from Goldblatt’s beginnings as a photographer up to 1994, covering the era in which South Africa was governed by the apartheid regime.

Under colonial rule, South Africa was already a highly segregated and unequal society, but the racialised separation of people was intensified after the election of the National Party in 1948. The Population Registration Act of 1950 defined individuals as ‘white’, ‘black’ or ‘coloured’. ‘Indian’ was added later. Successive laws led to the forced relocation of populations to specially designated areas. Apartheid legislation determined every aspect of people’s lives, from where they could live and what they could learn to whom they could meet or marry.

Goldblatt’s photographs during this period document the social and psychic structures of life lived under apartheid. In extensive photographic essays, some published in meticulously crafted books, he observes the particulars of individual experiences and environments, framed and informed by the broader political context. 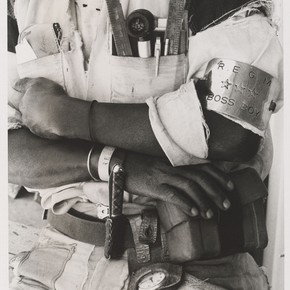 The first book Goldblatt published was 'On the Mines' (1973), with an essay by Nadine Gordimer who later won the Nobel Prize in Literature.

Goldblatt took most of the photographs on the Witwatersrand, the area that had been the backbone of South African industry since gold was discovered there in the 19th century. Mining was not only the motor of economic growth but formed part of the country’s identity. In Gordimer’s words: ‘The mining industry was the basis of South Africa’s industrial wealth and long ago set the pattern for the exploitation of blacks by whites. ... Weighed against gold, the white man’s sweat is still considered of greater worth than the black man’s’.

Goldblatt’s photo-essay explores the physical structures of mining (from the incidental to the monumental) as well as the lives and livings it affected. Portraits appear alongside interiors, landscapes and machines to create a personalised picture of a society structured around the migrant labour of black men. 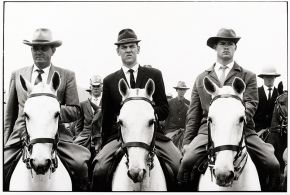 Though Goldblatt took the photographs for this essay between 1961 and 1968, the book was not published until 1975, entitled 'Some Afrikaners Photographed'.

The Afrikaners are descended principally from Dutch, Huguenot and German settlers, and speak Afrikaans. They were the driving political force of the National Party, which held power in South Africa from 1948 until 1994. The Afrikaners came to be identified with the ruling elite and, together with other ‘white’ communities, they were the beneficiaries of apartheid. 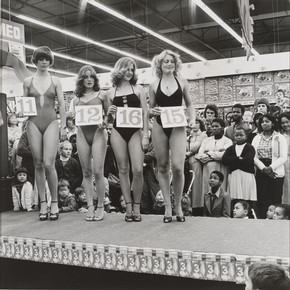 Boksburg is a town in the eastern sprawl of the greater Johannesburg area. The photographs Goldblatt took there in 1979/1980 (published as a book in 1982) examine life in what he describes as a typical ‘small-town, middle-class, white community’ of the period. As he noted: ‘Boksburg is shaped by white dreams and white proprieties. Most of its townspeople pursue the family, social and civic concerns of respectable burghers anywhere, while locked into a deep and portentous fixity of self-elected legislated whiteness’.

The photographs capture everyday scenes and social rituals in a segregated society. On its margins but vital to its existence appear the disenfranchised black onlookers, servants and labourers, who are tolerated in ‘whites-only’ suburbia. ‘Blacks are not of this town’, Goldblatt put it. ‘They serve it, trade with it, receive charity from it and are ruled, rewarded and punished by its precepts. Some, on occasion, are its privileged guests. But all who go there do so by permit or invitation, never by right’.

The book, 'Lifetimes: Under Apartheid' 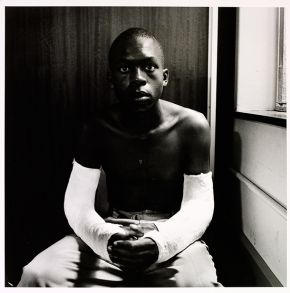 David Goldblatt, 'Lawrence Matjee after assault and detention by the Security Police', 1985. Museum no. E.113-1992, © Victoria and Albert Museum, London

Published 1986, this book renewed the collaboration between Goldblatt and Nadine Gordimer, a South-African author and anti-apartheid activist. It was planned as an anthology of both artists’ work, recontextualising writings and photographs that in their majority had already been published elsewhere.

There were however some previously unreleased recent pictures in the book, among them the cover image of 15 year old Lawrence Matjee, who had been brutally beaten by the Security Police. Lifetimes came out around the time that Goldblatt’s photographs were touring the UK, when political violence in South Africa was escalating to a dangerous new peak.

The implementation of apartheid social engineering forced many black South Africans to travel enormous distances between their homes and workplaces. They had been forcibly relocated to semi-independent homelands’or ‘Bantustans’, but were now very far from the white urban centres where they could find employment.

Goldblatt’s photographs from this essay, published in 1989, document the exhausting bus rides taking people in the dead of night, from their homes in the KwaNdebele Bantustan to the terminus in Pretoria, and then back to their homes at night. Together with the necessity of taking onward transport to workplaces in Pretoria, some travelled for up to eight hours per day.

South Africa: The Structure of Things Then

Goldblatt has always been interested in the ways values, ideology and politics are expressed not only in the actions and appearances of people, but also in the structures that they build.

The photographs he compiled for his 1998 book 'South Africa: The Structure of Things Then' depict built and social structures such as churches, monuments, squatter camps, private homes and servants’ quarters. Each is a manifest symbol of the conditions that created them. The pictures explore how people’s values, their ethos, aspirations, fears and needs have taken shape in the built environment of South Africa. The austere composition of the photographs sets each of them apart as a memorial in itself. 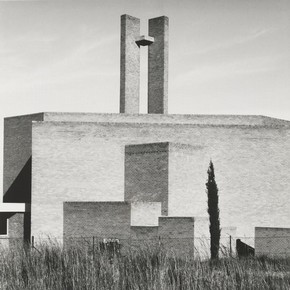 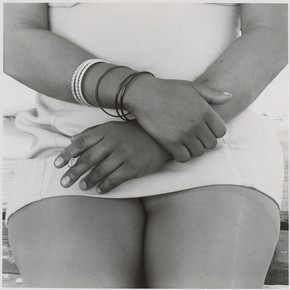 David Goldblatt’s father owned a men’s clothing store in the small mining town of Randfontein. The photographer later described the impact of this period: ‘Of my life experiences one that was crucial was that of working in my father’s shop … where I acquired a consciousness of bodily particulars that was technical rather than subjective’.

Mostly made in 1975 (although not published as a series until 2003) 'Particulars' is an assemblage of body fragments. The images are shot in close up and invariably set out of doors, to reveal the distinctive shapes and textures of the faceless, but highly individualised sitters. Goldblatt describes how he attempted to ‘explore ... the particulars of their bodies, as affirmations or embodiments of their selves’. Details of clothing, gesture, setting and pose reveal social and sexual identities, locating the figures in time and place.