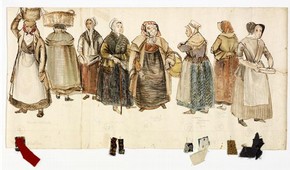 Among the Theatre and Performance collections there are over 3,500 stage costumes and accessories - ranging from complete outfits to individual headdresses. All are a tribute to the creativity and skills of designers and costume makers from the mid 18th century to today, in every kind of live performance - drama, opera, dance, musicals, pantomime, rock and pop, music hall, cabaret, circus.

Before the 19th century designing the great court spectacles and theatrical scenery was usually a side-line to an artist’s major work. Examples of these artists include Inigo Jones, Leonardo da Vinci and Philip de Loutherbourg.

In the 19th century, when realism was the predominant style, the scenery was usually designed by the scene painters. Costumes could be devised by a combination of performer and maker or drawn by a specialist and made by the theatre workshops and outworkers.

The 20th century saw the emergence of the career designer, and then the setting up of training courses. But stage design is still an uncertain job and even today, designers often combine theatre work with a career as a painter or teacher.

These treasures demonstrate the imagination, knowledge, skill and ingenuity of the designers, and the makers who translate their two-dimensional designs into three-dimensional forms.

A much-repeated cliché is that theatre costumes are badly made, tawdry, unfinished and don’t bear close inspection. Yet only in close-up can the inventiveness and resourcefulness of designer and maker be really appreciated. What at first glance seems crude is actually boldness, as a costume has to ‘read’ as well from the back of the auditorium as close up to the stage. Colours which seem garish in daylight soften under strong stage light.

Costumes also have to be extremely well constructed to survive the strains of performance and many costumes bear the scars of a long life. Fashionable clothes may only be worn a few times, but in a successful stage production a costume is worn every night for months or years. The clothes must stand up to robust handling, quick changes, theatre grime and the sweat generated by nerves and the incredible heat of the stage light. Pristine costumes are therefore likely to come from productions that failed, though they can still be superb examples of a designer and maker’s art. 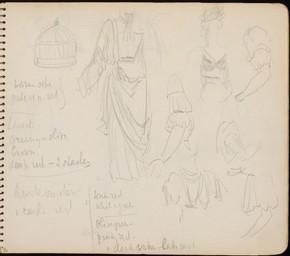 Once a play and its director have been chosen, a creative team is selected. This includes the designer and, according to the type of show, composer, choreographer and conductor.

The physical look of a show is decided on by the director (or choreographer for a dance work) in consultation with the designer. The designer then researches the setting, often resulting in files of reference material from books, films, magazines, photographs, museums and galleries; from this emerges the production’s ‘world.’

A design is produced for each set and character; the selected clothes and colour convey information about the character - personality, age, status, occupation, nationality, mood.

The designer has to be able to visualise how each individual costume will fit into an overall stage picture, giving each its proper place, be it for a leading actor or a walk-on part. Each individual design must fit into the overall concept while taking into consideration the performer who will wear the costume and what movements they have to make, and also the budget and the scale of the theatres in which the production will play.

The actual design is a working drawing for the maker. This can be an evocative sketch, the most detailed, annotated drawing or diagram, a collage or a computer graphic. If the designer knows exactly which fabrics and trimmings he or she wants used, swatches are attached to the drawings; other designers might discuss matters with the costume makers or (if they are known and trusted), leave these decisions to them. For example, designer Alix Stone often produced ‘friezes’ on long scrolls, showing the costumes together, often with fabric samples attached.

Some designs are a representation of real clothes and the drawings are straightforward, without stylisation or special presentation. Other designers are more impressionistic, evoking rather than depicting the finished costume, often working closely with the makers. Leading costumiers Carl Bonn and Colin Mackenzie found the vaguest designs most satisfying to work on:

"The more precise the design the more boring it was to do... every button and whatever put on it. What are you doing? You’re not interpreting. If it’s an artistic drawing, you talk about it, you create with (the designer)."

Designers also have to consider the technical elements of their costumes. For example, designing for partially-clad showgirls poses special problems, including which parts of the body to highlight and how, and which to conceal, for how long and when.

At their best, many of these costumes have a wit and gleeful charm, far from most people’s imaginings of seedy nightclubs and cabaret. Roland Cobb designed for Eve, a nightclub in a basement on Regent Street, London. The show’s themes were often surprising - like Shakespeare and Van Gogh. Or the girls illustrated various songs, like Cole Porter’s 'Miss Otis Regrets' or Gordon Lightfoot’s 'If You Could Read My Mind'.

During the 1960s and 1970s, nudity became more acceptable both in public and performance (topless waitresses and performers first appeared in the 1960s, The Sun published Page 3 Girls in 1969 and the first topless model in 1970). Cobb focused the toplessness by surrounding the breasts with elaborate sleeves, high imaginative headdresses and witty g-strings, all relating to the particular theme. The elaborate, towering headdresses were precise constructions, perfectly balanced so long as the wearer moved and stood correctly.

For the g-strings, Cobb eliminated the supporting bands round the hips.  Instead, he created a tight-fitting c-shaped wire, invisible in wear, with a small back bar to hold it in place; the front was a concealing panel, wittily decorated according to the costume’s theme. They must have been uncomfortable to wear and it is perhaps not surprising that, when a manufacturer introduced a c-string for day wear in 2007, it was received with very modified rapture by the testers.

Notes to the maker

Some designers attach fabric samples to their designs while others keep the samples for an entire costume or production on separate sheets with a note of the cost and supplier. These samples are chosen by the designer, or selected in consultation with the makers. When no costume yet exists, they are useful in helping people to visualise finished costume and also indicate the different fabrics available to designers at different times. For example, designer Alix Stone used heavy dark velvets and damasks for ‘The Mines of Sulphur’, which were then distressed or ‘broken down’, whilst Maria Björnson uses the favoured fabrics of the 1980s for ‘Phantom of the Opera’ - embroidered sari fabrics, gauzes and lamés.

The drawings also sometimes include notes to the makers. Bjornson’s designs must have been produced while the production was being developed because her annotations include both information for the costumier and reminders to ask the director to clarify certain points before she finalises the design. 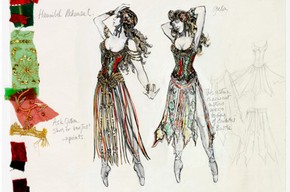 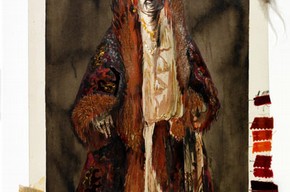 In the late 19th and early 20th centuries, pantomime developed into extravagant spectaculars, including scenes that were little more than parades of dozens of lavish and imaginative costumes based on a theme.

These ranged from flowers to postage stamps, makes of porcelain to the Sleeping Beauty’s wedding gifts, and called for the utmost imagination and resourcefulness from the designers to translate them into wearable costumes.

Another branch of fantasy is designing animals or supernatural creatures. Some costumes are realistic full skins, as in Dick Whittington’s traditional pantomime cat, while others are mere indications, like the spiky hair and occasional spine through the jacket in Mark Thompson’s designs for hedgehogs in 'The Wind in the Willows' at the National Theatre in 1990.

Attilio Comelli designed these insect costumes for girls to wear as part of the pantomime Babes in the Wood at Drury Lane, in the Christmas of 1907. There were twelve pairs of insects who featured in the forest scene. Other animals dancing in this pantomime in the forest scene included eight storks and twelve robins.

Drury Lane prided itself on producing the most visually impressive productions in the country as it had done since the days when Augustus Harris had been producer. At this date Arthur Collins was in charge at Drury Lane, and he was the co-author of this pantomime.

As had become traditional in Babes in the Wood, the plot included the characters Robin Hood, Maid Marion, Little John and Will Scarlet. Not all the scenes were entirely relevant to the plot, however, such as the scene in Lollipop Land played almost entirely be children, with scenery designed by the famous Bruce 'Sensation' Smith. 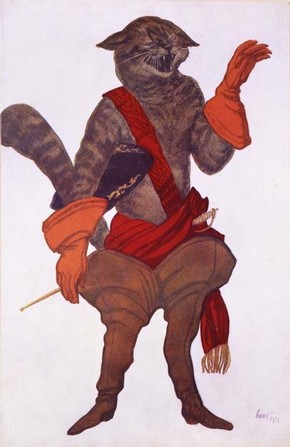 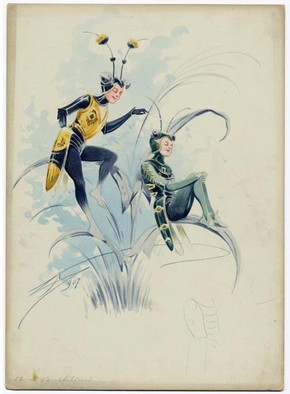 The designer as artist

Bakst’s original designs were not usually sent to the makers, but were copied by his studio before he added notes.  He also produced presentation drawings of the costumes, like this drawing based on a design for Massine’s 1917 ballet The Good Humoured Ladies.  It shows Bakst’s talents were not restricted to capturing sensuous Orientalism, but was equally at home in period costume.  He would not, of course, have expected the breasts to be exposed in the finished costume.

Another artist -designer was Japanese-American Isamu Noguchi who made his reputation as a sculptor and also worked with American contemporary dance pioneer Martha Graham. His unusual approach made things interesting for the costume makers. In 1955 he was commissioned to design King Lear for the Shakespeare Memorial Theatre company, starring John Gielgud and directed by George Devine. His costume designs were in the form of paper dolls, creating headaches for costume makers Carl Bonn and Colin Mackenzie:

The drawings give no indication of whether the details should be flat on the fabric or three-dimensional, and all the bands have to be carefully sized for the individual actor wearing the costume.

According to gossip, Devine wanted to stress the play’s universal, timeless and mythological qualities, so Noguchi’s first suggestion was that the actors should be naked.  Having abandoned this idea, his final designs reminded some critics of spacemen, while the helmets of Edmund and Edgar reminded another of the coal-scuttles worn by Tweeledum and Tweedledee in Alice Through the Looking-Glass.  Philip Hope-Wallace’s thought the cloaks "… like punched bus tickets", while the scenery was "like huge portions of Cheddar cheese frequently on the move". The holes in Lear’s costume grew larger as the play progressed (symbolising his decline), and backstage the production was known as the Gruyere cheese show. 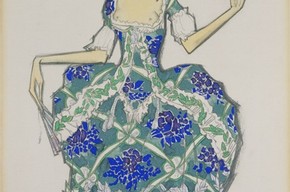 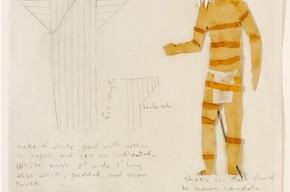 Since the late 19th century, leading fashion houses and couturiers provided fashionable clothes for leading actresses. Having their clothes seen on stage, worn by elegant actresses, was excellent free publicity in the days before the catwalk fashion shows. Worth, the Paris fashion house founded by the English-born Charles Frederick Worth in 1858, dressed opera divas Adelina Patti and Nellie Melba. Lucile dressed musical star Gertie Millar, the trend-setting Lily Elsie in ‘The Merry Widow’ and diva Gaby Deslys in Paris.

Chanel provided smart beach-wear for ‘Le Train Bleu’ for the Diaghilev Ballets Russes in 1924, while Molyneux provided Gertrude Lawrence with many of her dresses on and off stage in the 1930s. In the 1950s Balenciaga dressed Katharine Hepburn. Other fashion designers who have created notable stage costumes include Norman Hartnell, Christian Dior, Yves St Laurent, Armani, Versace, Jasper Conran, Red or Dead, Alexander McQueen and Zandra Rhodes. 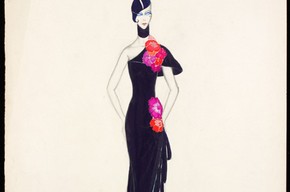 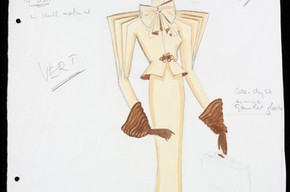