In collaboration with the Goethe-Institut London 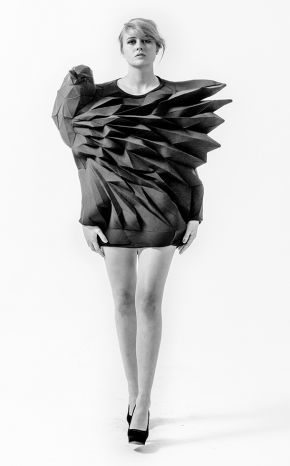 The Goethe-Institut and the V&A set out to find a German-based digital design resident, who uses technology such as CAD, rapid prototyping and 3D rendering, to come to London and look at our collections in a new and exciting way. The T/Shirt Issue is an interdisciplinary design collective from Berlin, consisting of Murat Kocyigit, Hande Akcayli and Rozi Rexhepi, whose practice combines fashion, design and technology to create work ranging from wearable garments to conceptual installations.

Murat completed his Industrial Design studies at the HfbK Hamburg and the UdK Berlin and during this time he and Hande founded the award-winning product label ‘Mashallah’. Hande studied at the Moscow School of Art and at the University of Marmara in Istanbul. Throughout her studies in experimental fashion design at the UdK Berlin, Hande’s focus was drawn to the philosophical and technical sides of aesthetics. Combining their fields of interest, they decided to explore the possibilities of digital pattern construction in 2008. Rozi, an MBA from the Erasmus University Rotterdam, joined the team a year later to further bridge the polarized fields.

The collective were interested in alternative pattern constructing methods. They experimented with digital tools to modify patterns and use software from other disciplines to create pieces that aesthetically reveal their technological background. Their goal was to interweave these methods and pattern construction so that their work, and their silhouettes, breathes technology in a natural way.

The underlying concept of their work was to express a thought, a moment, a value or a fascination by translating technological evolutions into the aesthetics of a garment, turning them into narrative sculptures. Previously they developed a new digital environment that allows for the reconstruction of clothing from the core up to any degree of complexity. With this approach they established a dimension in which 2D, 3D and the space in between is reconsidered and experimented with. Using the triangular polygon as a basic unit of digital substance and sculptural form, their mission was the digital reconstruction and documentation of the world around us. 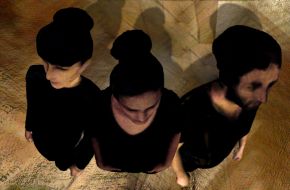 Our conceptual work has grown in conjunction with the development of our digital environment. Combining CAD/CAM, 3D and animation software in different measures gives us the freedom to scan, sculpt and share objects in continuous new ways. With an eye on the open source culture, we like treating our work as plain digital data that can easily be stored, shared and altered by us and the public and ultimately forms the basis of our digital reconstruction of the world. We're moving towards the democratization of this data, so that everyone can influence its course. 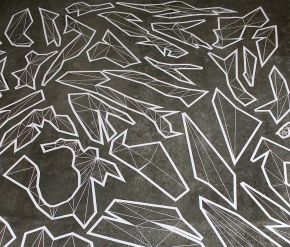 Patterns for the work ‘Melt’, © The T/Shirt Issue

Working with the V&A collections offered us the opportunity to look at the world's immense cultural history from a meta-perspective. We were keen on exploring and creating a digital mirror world from a selection of the V&A's permanent collection.

The main goal was to reshape existing cultural history and insert historic events by 3D scanning objects and figurines and turning them into new pieces. As soon as they become digital files, they were open for experimenting; not only their shape and texture can be recreated but all their attributes can be altered. From here, any 'what if' scenario can be implemented and we can theoretically travel back in time to enter new ideas of both the public and our own.

We created an online digital archive of the most inspiring works, which we can freely play with before they're translated into new paper and sewing patterns. The digital archive will be open to the pubic after, serving as documentation of our collective work.

Rozi Rexhepi: I’m Rozi from The T/Shirt Issue, an art collective from Berlin consisting of two more people, which is Murat Kocyigit and Hande Akcayli.
The T/Shirt Issue started six years ago out of a curiosity of what will happen when you expose pattern making to digital tools. So these digital tools have helped a lot of disciplines go forward, like industrial design, product design, animation, you name it. Pattern making and clothing hadn’t been so we decided to explore that area.

Hande Akcayli: Pattern construction itself is something that has been developed and when we started working with animation programmes and all these different softwares we understood the possibilities.

Rozi Rexhepi: It broke open the door to digital sculpting of clothing, which was great and hasn’t been done before.

We’ve been invited by the V&A to do a six month residency, a digital design residency, which we are close to finalising for London Design Festival.

As soon as we got here there is an overload of amazing work so we went around the Museum looking at sculptures and any 3D object really. A couple of years ago it was very hard to actually get hold of a nice 3D scan but we’ve got to this point that we have the luxury of a hand held, tiny device that we can take with us and go around the museum and scan every piece that we want. Having the digital data of all these beautiful pieces just allows you to manipulate the data in any way imaginable; you can combine things that you wouldn’t be able to combine before. For us the most interesting thing was combining a lot of human bodies with animal heads and we decided to go with eight pieces that we’re going to digitally merge into four hybrids, consisting of four human bodies and four animal heads.

So the next step would be the paper prototyping. We use the paper prototypes to, sort of, easily and quickly see if what we see on our screen actually works in real life as well. Our pattern making process lets go of the traditional pattern making process by means of us starting in the 3D realm, by 3D scanning things, modelling them, and then bringing them back to 2D patterns to flat them out and ultimately creating 3D pieces once again. So we go from very digital to a very analogue world, which is the exact opposite of what people normally do when it comes to pattern making.

We get mix scan of an object. You end up having somewhere between ten and twenty thousand polygons. Our aim is to make something that is capable of sewing back together so we try to reduce everything back to a thousand polygons. For the four final pieces we laser cut about one-hundred and eighty sheets, which is about four thousand triangles that we avoided doing by hand. The collective ran one-hundred and eighty sheets, about four thousand polygons and now they have to be sewn back together; this is a very hard-core production.

When we came here it was clear to us that we were actually making an installation consisting of jersey pieces, which is our favourite material to use to make the technology behind it look softer and more approachable to people. The stiffening interface that we use to keep our fabric stiff - in order for it to look like an actual sculpture it has to be stiff – we use a special interface for that. So when you transfer the interface on to fabric it looks like a collection of very abstract pieces. As soon as you start sewing things together by hand - slowly, slowly, slowly - things start to have a shape all of a sudden.

The four end pieces, they work together in an installation and the installation is called ‘Dreamland’, celebrating Edgar Allan Poe’s poem ‘Dreamland’. We will be showing this in the Norfolk House Music Room. Together they kind of create this little scene, little murder scene. Or it looks like it; it’s a bit eerie.

There’s a very beautiful combination of a lot of digital work and a lot of hand work. The end pieces they look very technological but you can actually see as soon as you zoom in that there is a lot of work that went in to it, a lot of hand work, a lot of craft.

We were very excited to actually work with playing around with the pieces, playing with that notion of being able to interfere with history and interfere with pieces that have been made and combine them together to create a very modern and current and relevant piece for the V&A.

Hande Akcayli: I come from a fashion background, which I never felt connected to. I think when we came together as a collective coming from different backgrounds that was very good. Every part of The T/Shirt Issue just added a bit.

Rozi Rexhepi: The experience has been really, really great. We are very happy that everybody is so happy.