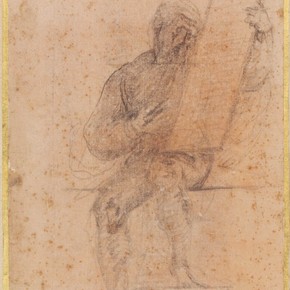 Until the 15th century, when paper became a cheap commodity, much drawing was done on small wooden panels surfaced with tinted wax or prepared with some kind of white ground, known as tablets. The surface would be cleaned off and renewed, allowing the same tablet to be used again and again.

For drawings that were to be preserved, a form of parchment, usually vellum made from calf’s skin, was the principle support. The skins were prepared by being rubbed with pumice and ground bone or chalk to smooth them and provide a hardened surface of compacted dust.

Paper was first manufactured in Europe in the 12th century but did not become plentiful until the 15th century.

Laid paper is traditionally made from linen or cotton rag, soaked and beaten until reduced to a pulp. The fibrous pulp is spread on a wire grid, consisting of rows of thin wires lying close together crossed at intervals by thicker wires. This enables the liquid in the pulp to drain away. The thin wires, and the chain of wire used to hold them together, impart a distinctive lined effect in the fabric of the paper.

All European paper was produced this way until the introduction of ‘wove' paper in the latter half of the 18th century. Instead of using a wire grid, a fine mesh is used to strain the pulp. It was much admired for its more random texture, which was capable of giving a more even surface to the paper than the more regimented texture of laid paper. It was, however, seldom used for drawing until the last two decades of that century.

Since about 1840 paper has also been made from wood chips, boiled and beaten to a pulp. To obtain the desired surface texture, the sheets are individually pressed, the pressure exerted being dictated by the desired finish. Usually the paper is sized to make it less absorbent.

The texture, finish, absorbency, colour, and association of the support influences the character of a drawing. The following drawings have been selected to demonstrate some of these characteristics. 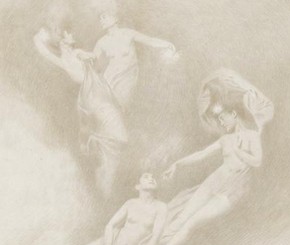 A metal-point is a metal rod, which will leave a thin deposit of the metal on the drawing surface. Lead, silver, copper and gold are the metals most often used.

Lead-point, known to the Romans, was widely used as a preliminary to pen before graphite became available. During the Renaissance metal-point was developed as an independent technique but subsequently it was little used until interest in it was revived in the 19th century.

An example of metal-point drawing is 'The Stars, Four Female Figures Among Clouds' by Charles Prosper Sainton. This drawing was probably executed in silver point. The lines would originally been a grey colour, but over time this has oxidised to a pale brown. The scale of the drawing is unusual for a work executed in such a fine medium.

Pen and brushes are the most traditional way of drawing with ink.  Before the invention of metal nibs, which were not widely used until the 19th century, there were two kinds of pen. Reed pens, shaped from reed or bamboo, and quill pens, shaped from feathers. Ink is also applied with fine brushes. Sometimes it is diluted and applied with fuller brushes. When this is the case the term 'wash' is usually used.

There are many different types of ink. Descriptions of the most common are given here.  Often more than one kind of ink is used in the same drawing.

Iron-gall ink is made from a suspension of iron salts in gallic acid obtained from oak galls. Although almost black when applied, it turns brown with time and its acid eats into the paper. It was the ink most commonly used for drawing from the 15th to the 18th centuries.

Carbon ink is made with soot or some other easily available carbon dissolved in water, often with a binder such as gum arabic added. This kind of ink does not turn brown or fade.

Bistre ink is made from wood soot dissolved in water. Its colour varies from brownish yellow to a deep blackish brown depending on the type of wood burned and its concentration. It is difficult to distinguish bistre from other brownish inks but one of its characteristics is the uneven granulated surface produced by undissolved particles. Bistre was used in the Middle Ages but the term did not become current until the 16th century and was not widely used until the 18th century.

Sepia ink is surrounded with confusion. True sepia is obtained from the inky secretion of the cuttlefish bound with gum arabic. It gives a smooth transparent effect. It is often, incorrectly, used to describe various tones of brownish wash, especially in connection with Old Master drawings. In fact it was only widely used in the 19th century.

Indian ink is a form of carbon ink that has been mixed with gum and resin. The quantity of gum and resin to carbon affects how opaque and shiny the ink is. It was first imported to Europe from China during the 16th century when it was mistakenly believed to come from the Indies. It was much used in the 20th century.

There is a wide range of media used in dry form. The most frequently encountered are described here in alphabetical order with typical examples of their use.

Chalk was traditionally black, red or white. Black chalk is a composite of carbon and clay and red chalk of iron oxide and clay. White chalk is made from calcium carbonate or soapstone. Black chalk became popular in the 16th century. Red chalk was also used then but became especially popular in France in the 18th century. Although chalk can be sharpened to a point it quickly wears down and cannot produce the fine strokes of a metal-point or pen. As a result it encourages the making of marks in a freer manner and on a broader scale.

Charcoal is a form of carbon made from the residue of wood burnt in a restricted supply of oxygen. Myrtle, walnut, birch and willow twigs are among the woods that have been used to make charcoal drawing sticks. Charcoal brushes off easily unless it is fixed. It has been used as a large-scale sketching medium since ancient times, but its use as a primary medium on paper only developed after the invention of reliable fixatives in the 20th century.

Graphite is a crystalline form of carbon. Pure graphite is soft but mixed with clay it becomes hard, its relative hardness being dependent on the proportion of clay to graphite. Much confusion surrounds the use of the term graphite. In its pure form, usually applied to vellum, it is often referred to as plumbago. Graphite encased in wood is nowadays called pencil, a term previously used to describe a pointed brush. Graphite was little used until the late17th century. Since then it has become a standard drawing medium.