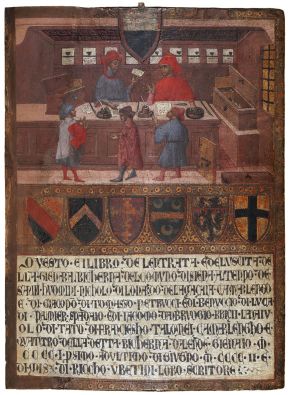 The rules of perspective

The representation of space using single-viewpoint perspective is a convention that is very familiar today. It is easy to forget that at one time the mathematical rules of perspective were themselves a new device to help artists to create the illusion of three-dimensional space on a two-dimensional surface.

The Italian architect and sculptor Filippo Brunelleschi (1377 - 1446) is credited as being the first person to make a mathematical study of the laws underlying linear perspective, but the art theorist Leon Battista Alberti (1404 - 1472) was the first to set them out in writing for the use of artists in his treatise on painting, De Pictura (1436). From the 15th century onwards, artists have learnt these rules as part of their training.

Japanese artists developed a different way of depicting space. This too was based on mathematical principles which were passed on by teachers to pupils. 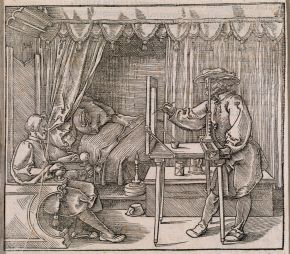 The problem of representing the real three-dimensional world in two dimensions is one that has engaged artists for centuries. In 1525 the artist Albrecht Dürer (1471 - 1528) published a treatise on measurement which included a series of illustrations of drawing frames and perspective machines. The aim of these devices was to enable artists to take accurate measurements of their chosen subject or to trace a scene as it appeared before them in order to create a convincing illusion of the real world.

Many of the techniques used in the 15th and 16th centuries continued to be useful to later artists. The artist John Constable (1776 - 1837) used a glass frame similar to one described in the Treatise on Painting by Leonardo da Vinci (1452 - 1519). 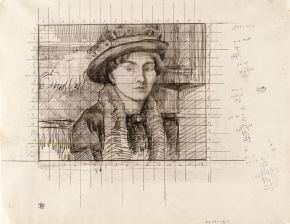 The feathered hat; Study for a portrait of the Artist's wife, Robert Polhill Bevan, about 1915. Musuem no. CIRC.241-1963. © Victoria and Albert Museum, London.

Counter-proofing, pouncing and the grid

Artists have employed a wide range of techniques for transferring images from one surface to another. Some techniques enable artists to make direct copies, others assist them in copying designs at a new scale. These 'tricks of the trade' were passed on by artists to pupils as part of their training. Some of the techniques used in the 15th century are still used today.

Artists could use these transfer techniques to copy a preliminary drawing onto a new surface in order to start working it up into a finished painting. The same designs could therefore be re-used for different works of art. Renaissance workshops often kept drawings that could be used again and again to make paintings of popular subjects such as the Virgin and Child.

A counter-proof is made by pressing a sheet of paper on to the original drawing while it was still wet. Both drawings were then worked up into finished pictures. Thomas Rowlandson often repeated drawings in this way and passed off counter-proofs for sale as original drawings. The deception was frequently increased by counter-proofing the original pencil lines as well, thus giving the unwary the impression of a spontaneous sketch following a rough outline.

Pouncing involves pricking tiny holes into an image so that charcoal can be pushed through to create a dot-to-dot copy on another sheet of paper or canvas.

The original pricked drawing was laid over a new surface ready for the original to be transferred. The artist filled a small muslin bag with powdered charcoal, and this was patted over the holes in the drawing. The tiny holes in the original drawing would leave behind small dots on the new surface, and this provided a guide which could then be worked up into a finished painting.

Many artists have used grids to assist them in creating larger or smaller-scale copies. A grid is drawn over the original study, and another grid is marked out at the desired scale on the surface where the image is to be reproduced. The artist can then copy the part of the design that appears in each square at the new size. This technique is still in use today. 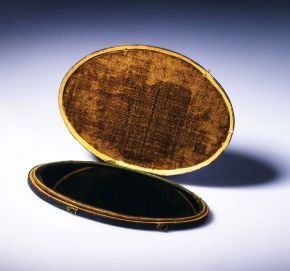 Claude Lorrain (1600 - 1682) was a leading 17th-century landscape painter who worked in Rome and became famous for drawings and paintings displaying a subtle gradation of tones. His work became immensely popular in England in the 18th century.

A Claude glass is a slightly convex tinted mirror, which was supposed to help artists produce works of art similar to those of Claude. The Reverend William Gilpin, an amateur artist, advocated the use of a Claude glass saying, 'they give the object of nature a soft, mellow tinge like the colouring of that Master'. The convex nature of the mirror shaped a large scene into a neat view, and the tinting (which was often sepia or brown) helped artists to see the relative tonal values of the view.

Many 18th-century artists and landscape theorists were interested in the effects of Claude glasses. They were widely used by tourists (who viewed scenery via the mirror to give the real live view the required 'mellow tinge') and amateur artists. 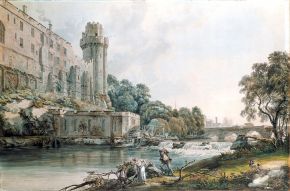 'Camera Obscura' is Latin for 'dark room'. It describes an enclosed space with a small hole in one side, sometimes fitted with a lens, through which light enters to form an inverted image of the outside world on a screen placed opposite the hole. The concept of the camera obscura was known from at least the 4th century BC, but it was probably not adapted for use as an artist’s aid until the 15th century.

It became particularly popular in the 18th century when many portable versions were developed. Many artists are known to have used one, including Canaletto (1697 - 1768) and Paul Sandby (1730 - 1809), whose works you can see in this section.

An artist could use the camera obscura as a drawing aid by tracing the images projected on the screen. The camera obscura could be useful for establishing the fundamental structure or perspective of a composition, but the artist still has to translate the projected image into a work of art by making marks on the paper or canvas. 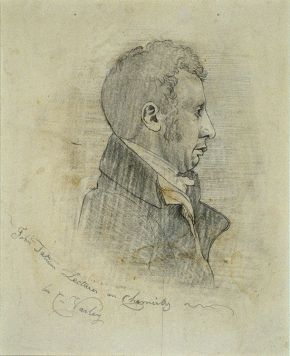 The camera lucida was patented by Dr William Hyde Wollaston (1766 - 1828) in 1807. It is a four-sided prism mounted on an adjustable stand. Looking through the prism gives the user of the camera lucida the illusion of seeing objects in front of the instrument on the drawing surface beneath. The camera lucida is much smaller than a camera obscura, easily portable, and can be used in full daylight.

A variation of the camera lucida was invented by the artist and scientist Cornelius Varley (1781 - 1873). He named this instrument the graphic telescope and patented it in 1811.

The telescopic lenses of the graphic telescope allowed artists to change the size of the image cast by the instrument, and to use it to draw objects that were some distance away.

The camera lucida and its variant the graphic telescope were widely used by 19th-century artists including John Sell Cotman (1782 - 1842), Cornelius Varley, and his brother John Varley (1778 - 1842).

Both instruments were difficult to use and making a drawing using one was not simply a matter of tracing an object; the artist still had to translate the image seen through the eyepiece into line, tone and colour. The difficulties associated with using such optical instruments encouraged the continuing search for accurate and easy ways of recording the world. 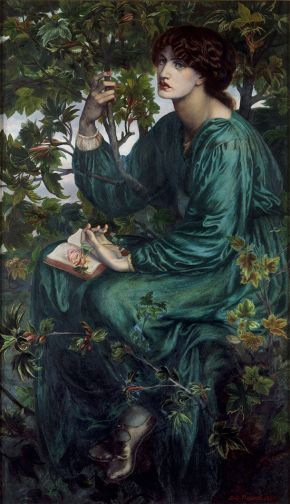 The age of photography

Dissatisfied with his own efforts at tracing images formed by his camera lucida, William Henry Fox Talbot (1800 - 77) began to experiment with chemicals to fix images photographically. Using a camera obscura and light-sensitive paper, he succeeded in making fixed paper negatives in 1834 and positives in 1839. At around the same time Louis Daguerre (1787 - 1851), building on earlier experiments by Nicéphore Niépce (1765 - 1833), developed a different photographic process resulting in images that he named daguerreotypes. Photography was born.

Fascinated by the perfectly detailed representations of nature that could be achieved, many painters began to use photography in place of studies and sketches. However, many concealed their use of photography, fearing that such a practice would reflect poorly on their artistic skills. 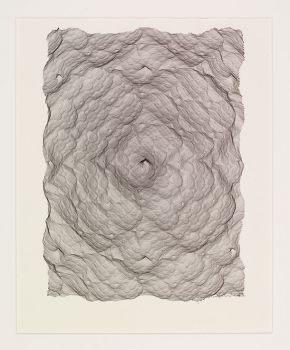 Computer technology has been used by artists since the late 20th century and many artists now use computers as part of their working process.

The public and critics have sometimes looked on the use of computers in art with suspicion. However, the computer is now frequently used by artists as a tool. It can speed up the working process, or do something more accurately or neatly than can be done by hand.

Drawings, photographs and video pictures can be digitised and then manipulated by computer, allowing selective alterations of perspective, tone and colour, and the cutting and pasting of elements from one image into another.
For most artists the computer can assist but not completely replace skilled technique in the production process. They have learnt to utilise computer technology as one of the techniques at their disposal, and it has pushed out the boundaries of what it is possible for them to create. Artists still believe that powerful ideas are an essential part of each work of art.