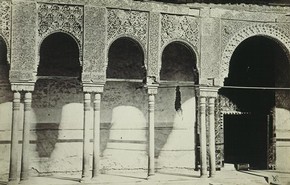 Charles Clifford, The Court of the Lions, Alhambra, albumen print photograph, about 1855. Museum no. 47:790

Granada, Spain
Built chiefly in the 13th and 14th centuries

The Alhambra (from the Arabic, Al Hamra, meaning The Red) is an ancient mosque, palace and fortress complex built by the Moorish monarchs of Granada, in southern Spain. The name is probably derived from the colour of the sun-dried tapia of which the outer walls are built.

After the Christian conquest of the city in 1492, alterations were made to the buildings within the Alhambra. In particular, Charles V rebuilt portions of the complex in the Renaissance style of the period, and destroyed the greater part of the winter palace to make room for a Renaissance-style structure which has never been completed. In subsequent centuries, Moorish art was defaced and some of the towers were blown up.

Napoleon in fact attempted to blow up the entire complex; however his plan was thwarted when a soldier, who wanted the plan of his commander to fail, decided to defuse the explosives and therefore saved the Alhambra for posterity.

The Moorish portion of the Alhambra resembles many medieval Christian strongholds in its three-fold arrangement of castle, palace and residential annexe for subordinates. The extremely intricate ornament detailing in the Moorish Alhambra stands in stark contrast with Charles V’s Renaissance palace which consists predominately of white walls and no particular striking features. 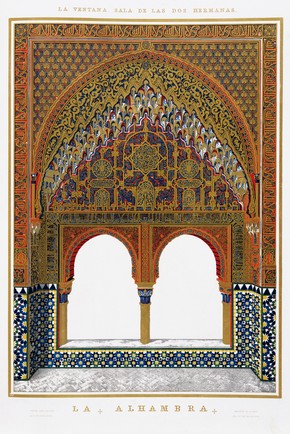 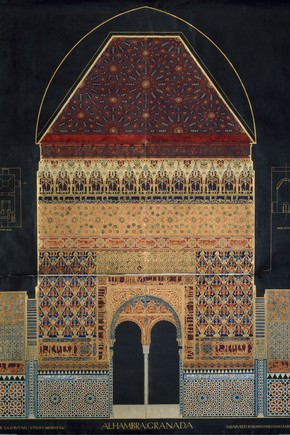 The celebrated Court of the Lions is an oblong court dominated in the centre by the Fountain of Lions, a magnificent alabaster basin surrounding by 12 lions in white marble. The twelve lions functioned as a clock with water flowing from a different lion each hour. The Christians of the Reconquest took apart the clock to see how it worked and it hasn't worked since.

The Hall of the Abencerrajes derives its name from a legend according to which Boabdil, the last king of Granada, having invited the chiefs of that illustrious line to a banquet, massacred them here. This room is a perfect square, with a lofty dome and trellised windows at its base. The roof is exquisitely decorated in blue, brown, red and gold, and the columns supporting it spring out into the arch form in a remarkably beautiful manner. Opposite to this hall is the Hall of the Two Sisters, so-called due to the two very beautiful white marble slabs laid as part of the pavement.

The Alhambra was the home of Spain's last Muslim rulers, the Nasrid dynasty. Much of what remains today was built between 1350 and 1400. The carved stucco decoration of the Alhambra was once richly painted and gilded. The walls were covered with colourful tilework decorated with intricate repeating designs. Silk curtains and other textiles added more colour and pattern.

The palace buildings are arranged around open courtyards. The buildings around one of these, the Court of the Myrtles, were used to receive important visitors. A pool runs the length of the courtyard and reflected in it is the tower of the Hall of the Ambassadors. Inside this hall, out of the bright sunlight, the light is filtered and formed into patterns by the screens across the windows.

A second courtyard is the Court of the Lions. This was a private garden for the sultan and his household. Here, a large central fountain is supported by carved stone lions. The sultan's apartments also included the Hall of the Two Sisters. Its amazingly complex ceiling resembles a delicate lacy honeycomb. 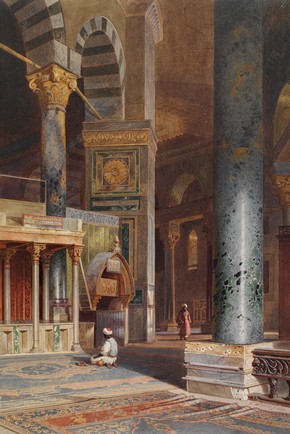 Dome of the Rock

Built by the Ummayyad Caliph Abd al-Malik, this holy shrine surrounds the rock from which Mohammed ascended to heaven on his horse, Buraq, and is one of Islam’s most holy buildings. The rock is also revered in Jewish tradition as the site where Abraham offered Isaac as a sacrifice.

Until 1833 the Dome of the Rock had not been measured or drawn; according to Victor von Hagen,

‘no architect had ever sketched its architecture, no antiquarian had traced its interior design…unbelievers took their lives in their own hands when they entered those sacred portals’.

On 13 November in that year, however, Frederick Catherwood dressed up as an Egyptian officer and accompanied by an Egyptian servant ‘of great courage and assurance’, entered the buildings of the mosque with his drawing materials feeling ‘irresistibly urged to make an attempt to explore them’. In a letter quoted by W.H. Bartlett, Catherwood explained what happened next:

‘It was a proceeding certain to attract attention and expose me to dangerous consequences. I quickly sat down to work, not without nervousness, as I perceived the Mussulmen, form time to time, mark me with doubtful looks; however most of them passed on, deceived by my dress and the quiet indifference with which I regarded them. At length, some more fanatic than the rest, began to think all could not be right; they gathered at a distance in groups, suspiciously eyeing me, and comparing notes with one another; a storm was evidently gathering. They approached, broke into sudden clamour and surrounding us, uttered loud curses. Escape was hopeless; I was completely surrounded by a mob of two hundred people.' 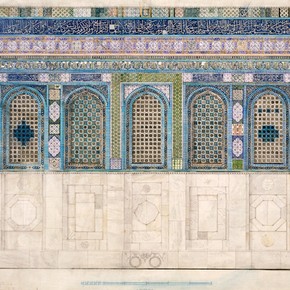 Ernest Richmond, Tile decoration of the Dome of the Rock, Jerusalem, watercolour. Museum no. E.2023-1924 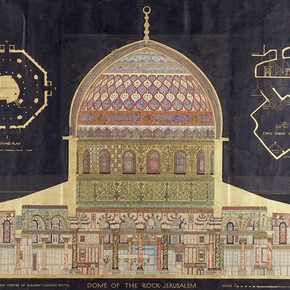 'Few moments would have past ere we had been torn to pieces, when an incident occurred that converted our danger and discomfiture into positive triumph. This was the sudden appearance of the Governor on the steps of the platform, accompanied by his usual train. The crowd rushed tumultuously up to him, demanding the punishment of the infidel who was profaning the holy precincts. At this the Governor drew near, and as we had often smoked together, and were well acquainted, he saluted me politely. He at once applied himself to cool the rage of the mob. ‘You see, my friends’, he said, ‘that our holy mosque is in a dilapidated state, and no doubt our lord and master Mehemet Ali has sent this Effendi to survey it, in order to complete repair’. Turning to me, in hearing of hem all, he said that if anyone had the hardihood to disturb me in the future, he would deal in a summary way with them. Gravely thanking the Governor, I proceeded with my drawing. All went on quietly after this. During six weeks, I continued to investigate every part of the mosque and its precincts.’

Thus, Catherwood made the first complete survey of the Dome of the Rock, and paved the way for many other artists in subsequent years, such as Harvey, Richmond and Werner. 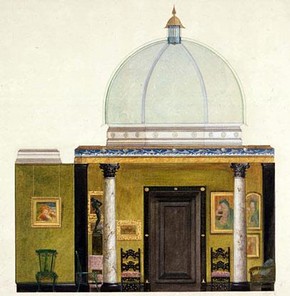 Design for the elevation of a wall of the picture gallery, Leighton House, George Aitchison, 1895. SC124/4 © RIBA Library Drawings Collection

The RIBA Special Collections holds five beautiful drawings by architect George Aitchison for the house that he designed for and with his client Frederick, Lord Leighton in Kensington, London, between 1865 and 1881. These can be seen in the RIBA Study Rooms at the V&A.

Lord Leighton’s house was built in three stages. The red brick house is quite plain on the exterior, especially for a house if this period, with modest Greek detailing. Internally, the rich dark colours and idiosyncratic details of the decorative schema display Aitchison’s considerable skill as an interior designer.

Although relatively modest in size, the spatial disposition of the first house was defined in part by works of art in Leighton’s collection. The first extension, begun in 1869, extended the studio and made space for the large canvases that Leighton sometimes used. By the start of the final stage in 1879, Leighton’s art collection had grown considerably. 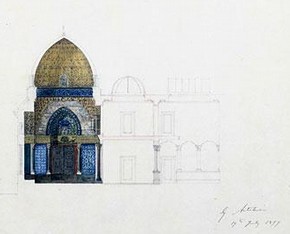 The Arab Hall extension, shown in images 1 and 2, was one of a set of rooms where Leighton entertained clients and held parties for his friends. The picture gallery shown in image 4 is another of these rooms.

The Arab Hall was constructed to display the tiles and woodwork from the Near and Middle East that he had been collecting since his travels in Turkey in 1867. As well as collecting objects personally, Leighton had various friends and colleagues collecting for him. These included Caspar Purdon Clarke, later Director of the South Kensington Museum (now the V&A), who spent two years travelling through Greece, Turkey and Syria to collect art object for the museum. By the time the Arab Hall was commissioned, Leighton had amassed around 1,000 individual tiles, as well as plates vases, textiles and coloured glass windows.

The interior of the Arab Hall, specifically the plan, the gold mosaic frieze, the use of marble cladding and the idea pool at the centre, is influenced by the reception room of the palace of La Zaza near Palermo. This was recorded by architects William Burges and Frederick Pepys Cockerell during the 1850s.

Other designers and craftsmen contributed to the design of the hall, including potter William de Morgan and art-worker Walter Crane, who produced the gold-mosaic frieze. 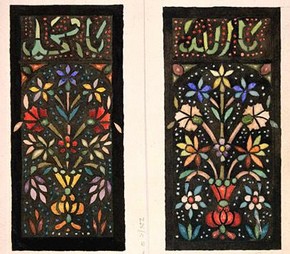 Objects related to Leighton House in the V&A collections:

Other objects related to Leighton House in the RIBA Library collections