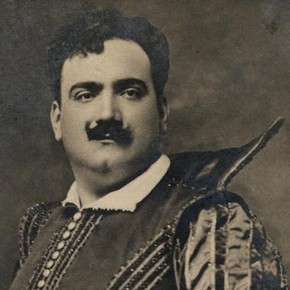 'The Great Caruso' or ‘King of Tenors' was born in Naples in 1873. He was his parents' 18th child and the first to survive infancy. Music was his escape from the wretched reality that surrounded him. He sang in Neapolitan cafes and restaurants. By 1895 he was singing leading roles at the Opera House in Naples. From there he went to the major Italian opera houses and then became an international star. ‘Who has sent you to me? God?' exclaimed Puccini on first hearing him sing.

Caruso's mouth cavity was huge and round and he could close his mouth over a large egg without breaking it - this may account for his amazingly rich, full tone. To his vocal control and refinement he added passion. Caruso poured emotion into his singing. He sang not only opera but popular Neapolitan songs and ballads.

He was an incorrigible practical joker, even on stage. When singing the aria ‘Your tiny hand is frozen' to Melba, he slipped a hot sausage into her hand.

Although virtually unknown today, Les Huguenots was one of the 19th century’s most popular works and was rumoured to have been Queen Victoria’s favourite opera. A selection of its themes are played as a march every year at the Trooping the Colour ceremony. Based on the historical events of the St Bartholomew’s Day Massacre in Paris in 1572, the plot had all the elements that the Victorians loved in opera, political and religious intrigue, unrequited passions and thwarted love, mistaken identities, lavish ballets, huge choruses and ensembles contrasted with passionate arias and duets, and a finale resulting in the deaths of most of the principal characters. Caruso performed the difficult role of Raoul at Covent Garden in June 1905 with a cast that also included Emmy Destinn as Valentine and Selma Kurz as Marguerite de Valois. 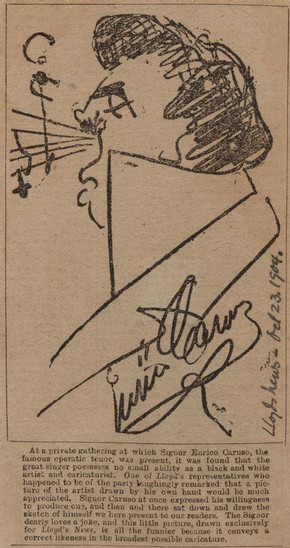 Self portrait by Enrico Caruso, 1904

Through his recordings, Caruso was the first opera singer to win a mass audience. People who had never seen an opera owned his records… His recording of Canio's aria from Pagliacci was the first million-seller. The gramophone ensured his immortality. For the first time, posterity could enjoy and judge a singer from another era. Equally the success of his records helped establish recording as a commercial proposition and pave the way for mass home entertainment.

Caruso made over a million dollars in his lifetime but died tragically early, aged only 48, of pleurisy. Asked what made a great singer he said: ‘a big chest, a big mouth, ninety per cent memory, ten per cent intelligence, lots of hard work and something in the heart'.

This caricature self portrait by Enrico Caruso was drawn in 1904. Caruso was a compulsive caricaturist who made spontaneous and witty sketches of colleagues and strangers wherever he went. His doodles often captured a candid likeness of the person, but they were never cruel.

Although he was proud of his sketches, he turned down offers to draw professionally. However, he did regularly contribute to an Italian-American newspaper called La Follia di New York, from which a book of drawings was eventually produced. Nowadays his cartoons are extremely collectable. One firm even reproduced one of his self caricatures as a powder compact.

Many opera fans today would give anything to have been at Covent Garden for this 1902 performance of Rigoletto starring the legendary Nellie Melba and Enrico Caruso. 14 May 1902 was the night of Caruso’s Covent Garden debut. Melba had been the reigning queen there since the 1880s. They had already sung together earlier that year in Monte Carlo and became a regular partnership in London and New York. It was their performances as Rodolfo and Mimi in La Bohème that established Puccini’s opera as a public favourite. 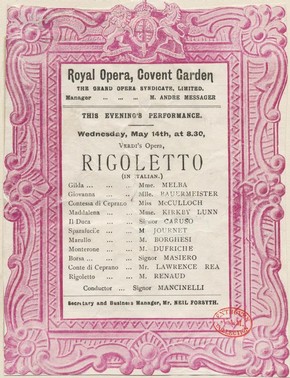 Caruso never quite ousted Jean de Reszke as Melba’s favourite tenor. Although in her memoirs she referred good naturedly to his practical jokes on stage, she was less tolerant of them at the time. Caruso was the first opera singer to become an international star through his gramophone recordings. One, ‘On with the Motley’ from Pagliacci sold over a million copies.