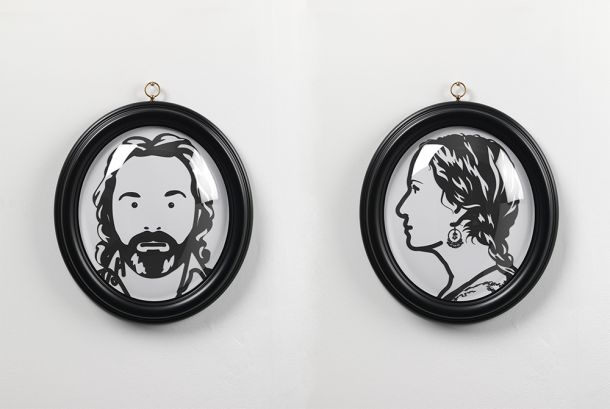 Facing History: Contemporary Portraiture is a display of 80 prints and photographs drawn from the V&A’s collection, exploring the variety of artists’ responses to the idea of portraiture over the last 20 years. On display is work by over 20 artists including Julian Opie, Grayson Perry, Thomas Ruff, Maud Sulter and Gavin Turk. Portraits range from colour woodcuts and photographs to black and white etchings, cut paper silhouettes and bronze medals.

The display highlights how contemporary artists have taken inspiration from traditional modes of portraiture such as portrait miniatures, medals and death masks. It includes a pair of prints, Mr and Mrs Perry (2005) by Grayson Perry which were inspired by pictures produced by amateur artists in the 19th century prior to the popularisation of photographic portraits. In creating the works, Perry imitated the crude style of such artists, using lino-cut on printed pattern papers.

Facing History: Contemporary Portraiture includes other self-referential pieces, such as Gavin Turk’s Portrait of Something that I’ll Never Really See; portraits of real individuals, as in Thomas Ruff’s Blue Eyes series; and fictional characters in the work of Lynette Yiadom-Boakye. The subject for Brian D. Cohen’s Man with Eyes Closed (Walter White) is both a character from the US television series Breaking Bad as well as actor Bryan Cranston who played him. The image echoes the style of a death mask, showing the face with closed eyes and a shaved head. Cohen draws on ‘tronies’, anonymous character heads painted by 17th and 18th century Dutch and Flemish artists.

The display also examines the ways in which the portrait is used today in passport photographs and identity cards. Inspired by contemporary ID cards, Cecilia Mandrile’s series ID-Intensively Displaced, reflects the pressure on migrants to move from place to place. Mandrile photographs dolls in different surroundings with scant resources to explore current issues relating to migrancy.

The display shows how contemporary practitioners have also been inspired by artists who made a speciality of portraiture, including Frida Kahlo, Rembrandt and Vermeer. Eleven works from the series Forty Fridas (2011-12) by Ellen Heck will be included. These woodcut and dry point prints portray different women dressed as Frida Kahlo, touching on ideas about identity, individuality and self-presentation.

The theme of the display was prompted by the acquisition of the series Made Up Love Song by Bettina von Zwehl, a previous V&A artist-in-residence. Taken in the style of silhouette portrait miniatures, the 34 photographs portray a V&A Visitor Services Assistant. 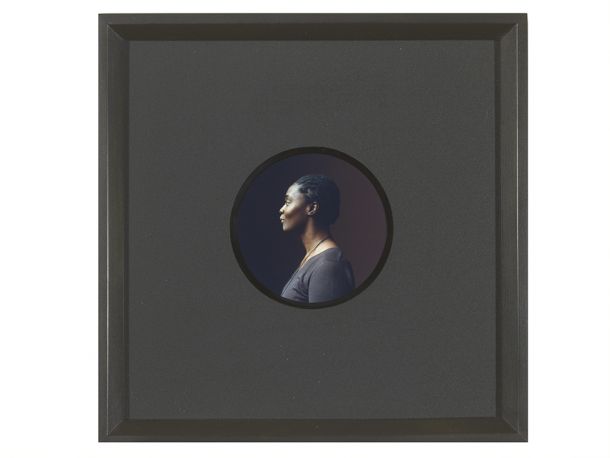