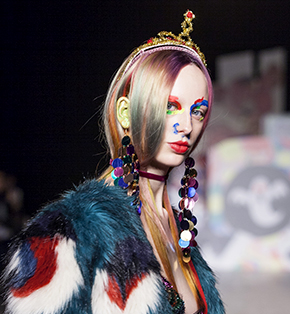 Fashion in Motion is a series of live fashion events presented against the unique backdrop of the Victoria and Albert Museum. Featuring some of the greatest designers of our time, Fashion in Motion brings the excitement and spectacle of the high fashion catwalk to a wide audience.

Celebrated design duo Meadham Kirchhoff were the subject of the V&A’s Fashion in Motion, presenting highlights of the label’s womenswear collections to date.

The Anglo-French duo Edward Meadham and Benjamin Kirchhoff met at Central Saint Martins, where Meadham studied womenswear and Kirchhoff menswear. The pair formed the London based Meadham Kirchhoff label in 2002 and went on to win the ‘Emerging Talent – Ready-to-Wear’ award at the British Fashion Awards in 2010. Known for presenting beautiful, theatrical collections against intricately staged and often surreal settings, Meadham Kirchhoff has since garnered widespread critical acclaim.

The designers, who cite influences as varied as Courtney Love, Chanel, The Riot Grrrls and traditional portraiture amongst their inspirations, will select personal highlights for the V&A catwalk shows. Included will be garments from the collections Suddenly, Last Summer (S/S 2011) and A Rebours (A/W 2010), which featured flowing gothic dresses overlaid with floral painted biker jackets and veils in colourful hues. Edward Meadham and Benjamin Kirchhoff said; ‘We are very pleased to be involved with the V&A’s Fashion in Motion series. When approaching every collection or garment we secretly hope to make something worthy of being seen in a museum, so for us it is an honour to present a show comprised of hand-picked pieces from our favourite collections.

‘Meadham Kirchhoff are known for creating a fantasy world in their collections through their beautifully crafted garments and focus on fine detail. Their shows always contain an element of surprise and wonder, often with a hint of darkness and we are delighted to have the opportunity to bring this experience to V&A audience'

This video contains no spoken word

Video: Meadham Kirchhoff - Behind the Scenes

La Touche: It felt like i was reading a fairytale book, like one of those books you read when you were younger and it kind of pops up.

Benjamin Kircchoff: Its not a collaboration as much as a consultation you know. Like I think that Edward designs all the womenswear and i design the menswear, but we have no other brains to turn to when it comes down to who too ask at the end of the day…

Edward Meadham: I think its a matter of symbiosis.

Edward Meadham: We haven’t just made a collection, its bits from our last ten years.

Benjamin Kircchoff: Thats the way we approached it.

Edward Meadham : I didn’t want to show like one… like the most recent collection. Its more than a show, its an entire…

Benjamin Kircchoff: Its our entire lives that we are putting down on the runway.

Benjamin Kircchoff: …they go all over the place…

Fred Butler: It is a one-off because most designers at the moment are doing really safe, serious, easy and this is challenging.

Benjamin Kircchoff: I think you know we have been doing this since 2002 and we have had ups and downs in like the process of it. We have learned not to sort of ever put our hopes up and to put our heads down and to work and do it.

Edward Meadham: There is certainly no plan of… what direction things will turn at any specific point… its entirely organic.