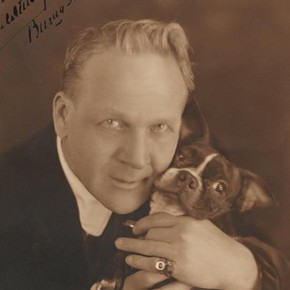 Feodor Chaliapin (1873 - 1938) was one of the greatest opera singers of all time. He was born in Kazan in Russia in 1873, the son of a peasant. He had an unhappy childhood with a domineering and drunken father. He left home at 16 and joined a provincial opera company where he lived in poverty, going for days without food.

Chaliapin was largely a self-taught singer. He never attended music school and learned through performing with provincial Russian opera companies.

What made him different from most singers of his time was that he applied psychological techniques to operatic performance. He was a perfectionist in his make-up and costuming. Stanislavsky was greatly impressed by the way Chaliapin fused all the elements of performance into a powerful whole.

Chaliapin sang in Europe from 1901, but it was not until after 1908 when Diaghilev arranged Russian opera seasons in Paris and London that he was heard singing the great Russian operas, which were unknown in Europe.

Such was his power as the dying Boris Godunov that a London critic declared he could see the hairs of the men in the stalls bristling.

Chaliapin's voice was of extraordinary depth, richness and sheer magnitude. Mary Ellis, who sang opposite him in New York, remembers his voice as being like a huge church bell which literally shook her with its vibrations. ‘Immense' summed him up – in voice, personality, charm, living and size. He was a bear of a man, standing well over six feet.

His costume for the coronation scene in Boris Godunov, which is in the Theatre and Performance collection, is extraordinarily heavy, taking at least two people to lift. It is almost impossible to imagine how anyone could have sung wearing such a heavy costume under the heat of the stage lights.

Chaliapin remained in Russia during the revolution but in 1921 he went into exile and died in Paris in 1938. 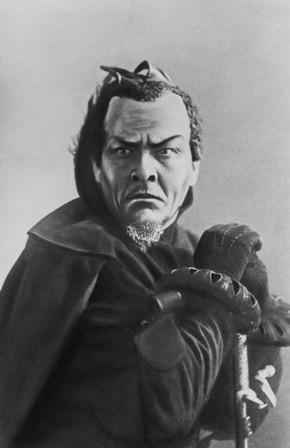 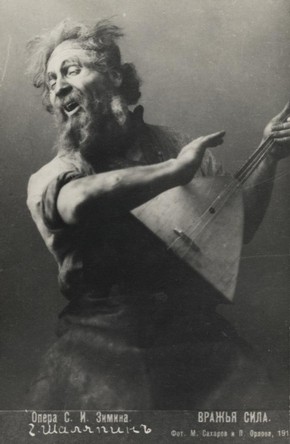 Chaliapin sang in Faust all over the world, including some performances at Covent Garden in 1928. Traditionally, the role of Mephistopheles had been played as a charming trickster, but Chaliapin’s interpretation was the devil incarnate.

The opera critic Ernest Newman said that ‘I can understand some people disliking Chaliapin’s Mephistopheles for its decidedly unpleasant flavour. There have been Mephistopheles whom one could like in spite of  their wickedness. Chaliapin shows us a devil so filled with sheer lust of evil, so pitiless to every human weakness, that one shrinks from him as from some horrible, ruthless animal.’ Chaliapin seemed to enjoy portraying the devil – another of his great performances was the title role in Boito’s Mefistofele.