The Formation of the Ceramics Collections 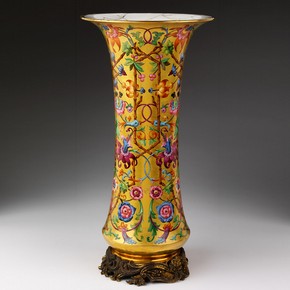 The collections of the Victoria and Albert Museum are, in the fields of post-Medieval European, Middle Eastern and East Asian ceramics, now the most extensive and comprehensive in the world. The Museum cares for world-class collections of European tin-glazed earthenwares, notably Italian Renaissance maiolica, French and Spanish ceramics, English 18th century ceramics, 19th century art pottery and exhibition pieces, Middle Eastern and Chinese ceramics, and international 20th century and contemporary work. These collections have been formed over many decades, sometimes rapidly with the acquisition of huge private collections but more often gradually and painstakingly - and even at times serendipitously.

The very first item to be acquired for the ceramics collections was a flared Paris porcelain vase mounted on a gilt bronze stand (museum number 463-1844). Painted with a profusion of brightly-coloured flowers dramatically set off against a completely gilded ground, this vase was bought new, most probably from the Escalier de Cristal stand of retailer Lahoche, Boin & Cie
at the 1844 French Industrial Exhibition. The acquisition of this vase actually pre-dated the building of the South Kensington Museum. The Government School of Design, set up in Somerset House in 1837, accumulated examples of carefully-picked fine and decorative art with which to educate and inspire the students.

Contemporary French porcelain was especially admired and collected to demonstrate the tenets of good design. The School of Design collection, further augmented by purchases from the Great Exhibition of 1851, became the founding collection of Henry Cole's Museum of Ornamental Manufactures which opened at Marlborough House in 1852. Then in 1857, the Museum of Ornamental Art reopened as part of the newly-built South Kensington Museum. Finally renamed the Victoria and Albert Museum in 1899, it was not until 1909 that the science collections were separated off to become the Science Museum. 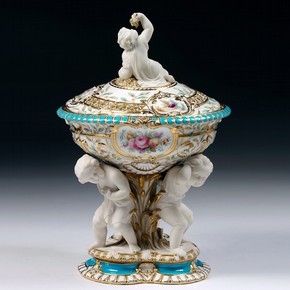 Thousands of items were gradually added to the collections by Henry Cole, the Museum's first Director and John Charles Robinson, the Museum's first curator, appointed by Cole in 1853. They sought to influence taste by presenting what they considered examples of the best modern manufactures. They also aimed to show a wide range of historical wares from around the world to educate students and general visitors and to inspire British designers and manufacturers. Minton bone china items straight from the factory or via the Minton stand at the Great Exhibition were among the earliest acquisitions of contemporary English ceramics. Meanwhile, examples of historic English pottery were bought in 1852 from the former collection of the Staffordshire potter, Enoch Wood.

In 1853, the Museum bought a wide variety of ceramic wares from the collection of the late James Bandinel, former superintendant of the slave trade department of the Foreign Office. During the 1850s and 1860s, holdings of Italian Renaissance tin-glazed earthenware (maiolica) and French Renaissance earthenware (Palissy, St. Porchaire) received a considerable boost
with the purchase of maiolica from the Ralph Bernal sale of 1855 and the piecemeal purchase between 1856 and 1860 of the outstanding collection of Toulouse lawyer, Jules Soulages. In addition, two (of an eventual nine) examples of rare Medici porcelain were bought in 1859 and a St. Porchaire salt came from the Soltikoff sale of 1864. 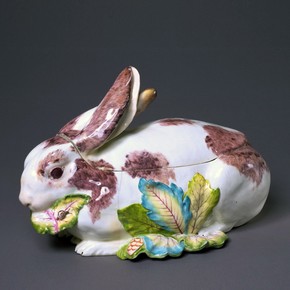 C. Drury E. Fortnum, who in 1873 wrote the first ceramics collection catalogue for 'Maiolica, Hispano-Moresco, Persian (i.e. Iranian), Damascus (i.e. Syrian) and Rhodian (i.e. Turkish Iznik) Wares in the South Kensington Museum', made further maiolica purchases. Sir Robert Murdoch-Smith acquired Iranian ceramics for the Museum, including items from the collection of Jules Richard, while serving as a Royal Engineer in Iran in the 1870s-1880s. Spanish pottery, including tin-glazed earthenware, lustreware and traditional 19th century pots, was bought from Juan Riaño between 1871 and 1893. In 1876, the Museum purchased directly from the Japanese Commissioners to the Philadelphia International Exhibition a selection of Japanese wares, quite novel to western eyes, in advance of their display at the Exhibition.

In the winter of 1881-1882, Caspar Purdon Clarke, a draughtsman who was later to become Director in 1896, was sent by the Museum on a buying trip to India to acquire examples of contemporary ceramics and other works of art from the Indian Schools of Art. The 1882 bequest of the military tailor, John Jones, brought to the Museum a magnificent collection of French porcelain, largely Sèvres, which was displayed in separate galleries from the main ceramic collections. In 1883, Dr. Stephen Bushell, art enthusiast and medical doctor in Beijing, acquired some fine Chinese pieces on behalf of the Museum. Lady Charlotte Schreiber hugely augmented the English porcelain collection in 1884 following the death of her second husband with whom, during the previous twenty years, she had taken much pleasure in hunting down many choice pieces in the antique shops of Europe. The same year, the Museum bought an impressive Palissy cistern from the Andrew Fountaine sale.

A vast range of English pottery, along with some ancient and continental pieces, and interestingly, Moroccan wares, came to the Museum in 1901 from the Museum of Practical Geology, Jermyn Street after its closure. The W.J. Cope bequest of 1903 included much excellent 18th-century Chinese porcelain, as did the 1905 and 1907 gifts of William and Julia Gulland. From almost immediately after its foundation in 1903, the Art Fund (formerly the National Art Collections Fund) has facilitated the donation of ceramics to the Museum. The most numerous group from a single donor were the pieces given between 1910 and 1937 by Lt.-Col. Kenneth Dingwall D.S.O. through The Art Fund, culminating in his bequest of 1948. Henry Wallis sold the Museum about fifty choice pieces of Spanish lustreware, on which he was an authority, in 1907. In 1909, the Australian millionaire George Salting died and the majority of his magnificent collection including Chinese, Japanese, Turkish and Iranian ceramics, Italian maiolica, Spanish armorial pottery, Palissy and Delftware came to the Museum. 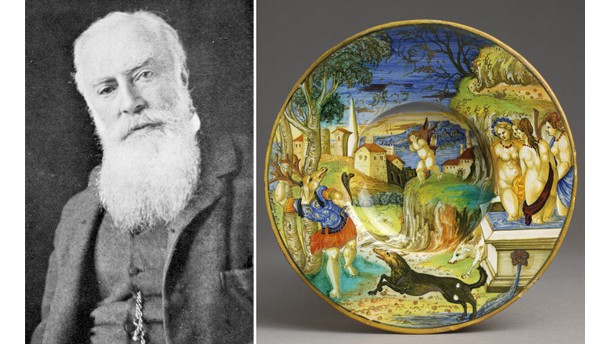 The Eumorfopolous collection was sold to the nation in 1935 and divided between the V&A and British Museum. From this came an outstanding selection of early Chinese ceramics. The collection of Wallace Elliot, a founder member of the English Ceramic Circle, was divided under the terms of his bequest between the V&A and British Museum in 1938. Arthur Hurst, an expert in Yorkshire pottery, bequeathed several hundred pieces of mostly English pottery and porcelain to the Museum in 1940.

Stuart G. Davies presented the Museum with gifts from 1920, methodically attempting to fill gaps in our collections, and his 1951 bequest added significantly to our holdings of tin-glazed wares, mainly French. The Basil Ionides bequest of the same year gave us many interesting 18th-century Chinese impressions of Europeans, adding to those from William Gulland's bequest of 1931. In 1965, the bequest of Professor F.H. Garner, O.B.E. enriched the Museum's collection of English delftware. The Far Eastern Department (now the East Asian Section of the Asian Department) was formed in 1970 under John Ayers, who moved along with the East Asian Collection from the Ceramics Department. 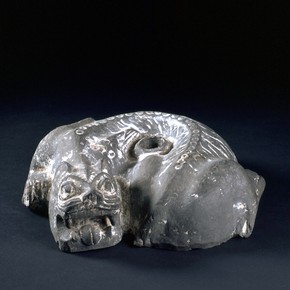 Sir John Addis presented the new Section with early Chinese pots between 1975 and 1983 and Mr. P Cooke gave Chinese export wares in 1978. Clement Ades' pots found at Jurjan, Iran, were given to the Museum in memory of his wife in 1977-78.

In 1984, Mrs O.J. Finney's commedia dell'arte and exotic bird figures added colourfully to the Museum's Meissen collection and further important early 18th century Meissen arrived from the Arthur and Hilde Weiner Collection in 2006. In 1997, Judy Novak helped us acquire the grand Minton Fountain designed by Charles Toft for the Paris Exposition of 1878.

Since 2001, Julie and Robert Breckman have enabled the Museum to improve its collection of 19th-century Staffordshire figure groups. Sir Harry Djanogly CBE has not only helped the Museum with the purchase of key pieces of English delftware in recent years but has also supported one of the new Phase 2 ceramic galleries opening in 2010.

In 2002, the Middle Eastern Section was set up in the Asian Department following which the Ceramics Section began the transfer to the new Section of all pots from the Islamic Middle East formerly in their care. 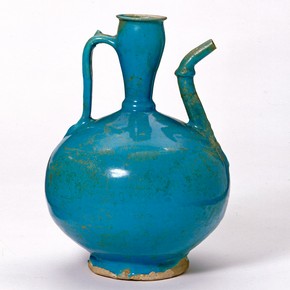 In addition to pots, there are also many outstanding series of sherds, mostly given to the Museum in the late 19th and early 20th centuries following the excavation of sites such as Samarra and Fustat. These fragments of pots often tell curators more about potting techniques, social habits and east-west trade than do whole single items.

The Art Fund has assisted generously with a number of significant ceramic purchases over the last seventy years.

Among key acquisitions made with The Art Fund's help are a large Coptic jar painted with faces from 5th or 6th century Egypt (C.6-1944), the Chelsea porcelain 'Chinese Musicians' figure group (C.40-1974), a whimsical tiered Meissen sweetmeat stand of about 1755 (C.124&a-1977), an Italian maiolica dish painted with a satyr and nymphs and dated 1503 (C.36-1989), a Bow inkwell signed by the porcelain painter James Welsh (C.2-1990), acquired with the assistance of the
Friends of the V&A. 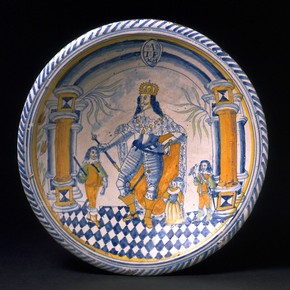 Also included were the splendid English delftware Charles I charger dated 1653 (C.71-1998), and the Meissen King Vulture (C.11-2003) from the famous porcelain menagerie commissioned by Augustus the Strong (1670-1733), Elector of Saxony and King of Poland for his 'Japanese Palace' in Dresden.

Funds for the King Vulture were also provided by the Heritage Lottery Fund and Friends of the V&A. Last year, The Art Fund helped the Museum buy a pair of Japanese-style vases (C.1&2-2008) designed by the architect E.W. Godwin in about 1877.

The Museum has always collected contemporary works - in the 19th century from the great international exhibitions, in the early 20th century from the art potteries and over the course of many years directly from factories who are often willing to make donations of selected new products.

Throughout the 20th century, studio pottery was also collected, at first chiefly by the Circulation Department which, until its closure in 1977, used to tour small exhibitions to schools and regional venues. Studio pottery continues to be actively collected by both the Ceramics Section and the Asian Department, often with
assistance from generous private donors. 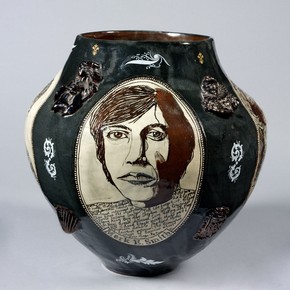 It is particularly in this area that the boundary between craft and fine art has been blurred if not obliterated, for instance with the work of Turner-prize-winning artist Grayson Perry.

The advantage of collecting the contemporary is that items are often more readily obtainable and at better terms than may subsequently be the case. The disadvantage is that the curator does not have the benefit of viewing in hindsight an artist's entire lifetime oeuvre and cannot judge a factory's current output in the context of its later designs.

Throughout its existence, the Museum has purchased and has been given or bequeathed other groups of ceramics or individual pieces too numerous to mention here. In order to augment its modest purchase funds and to fill identified gaps in the ceramics collections, the V&A continues to rely upon and to be grateful for the goodwill and generosity of its many benefactors.