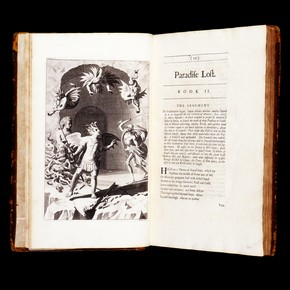 Blank verse is unrhyming verse in iambic pentameter lines. This means that the rhythm is biased towards a pattern in which an unstressed syllable is followed by a stressed one (iambic) and that each normal line has ten syllables, five of them stressed (pentameter).

It little profits that an idle king ,

The syllables here marked in bold are those on which the emphasis (stress) falls.

However, there is scope for considerable variation in the pattern of stresses. Here are the lines that follow the previous example:

By this still hearth, among these barren crags
Match'd with an aged wife, I mete and dole
Unequal laws unto a savage race ,
That hoard, and sleep, and feed, and know not me.

From Ulysses by Alfred, Lord Tennyson

If you look at the beginning of each of the first two lines, you will see departures from the strict iambic pattern. It reasserts itself in the two lines that follow.

Blank verse poetry can contain any number of lines. It is the traditional metre for long narrative poems and verse drama. It is also often used for poems of description and reflection and for dramatic monologues: poems in the form of a speech by a single character.

A device typically found in well-handled blank verse is enjambment. This is where a grammatical unit (such as a statement or clause) is run on into the next line. These lines contain two examples of enjambment:

I cannot rest from travel: I will drink
Life to the lees: all times I have enjoy'd
Greatly...

From Ulysses by Alfred, Lord Tennyson

The breaks in these lines are called the caesuras. Notice that in each line the caesura is placed at a different point: in the first line after seven syllables, in the second after four.

Enjambment, with skilful variation in the placing of caesuras, helps to prevent blank verse from becoming monotonous. It also helps to create an illusion of natural speech.

Blank verse was introduced into England by the Earl of Surrey in about 1540. It is the principal metre of Shakespeare's plays and the metre of Milton's epic poems, as well as of many other major works of poetry.