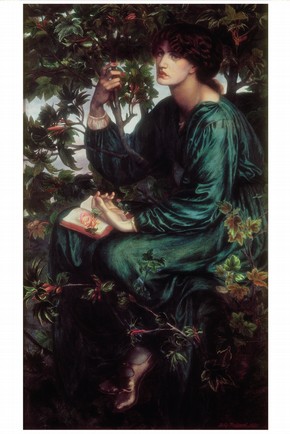 Sonnets are short rhyming poems, normally of 14 iambic pentameter lines – an unstressed syllable followed by a stressed one (iambic) and with lines of ten syllables, five of them stressed (pentameter).

Characteristics of the sonnet

There have been many variations on the basic sonnet form.  Petrarchan sonnets are harder to write than Shakespearean sonnets and are much less common.

The following example, by the poet and artist Dante Gabriel Rossetti, is about one of his own paintings, The Day Dream, which is now in the collections of the V&A.

THE thronged boughs of the shadowy sycamore
Still bear young leaflets half the summer through;
From when the robin 'gainst the unhidden blue
Perched dark, till now, deep in the leafy core,
The embowered throstle's urgent wood-notes soar
Through summer silence. Still the leaves come new;
Yet never rosy-sheathed as those which drew
Their spiral tongues from spring-buds heretofore.

Within the branching shade of Reverie
Dreams even may spring till autumn; yet none be
Like woman's budding day-dream spirit-fann'd.
Lo! tow'rd deep skies, not deeper than her look,
She dreams; till now on her forgotten book
Drops the forgotten blossom from her hand.

The presence of the couplet at the end has a marked effect on sonnets that follow this pattern.

The English sonnet sometimes follows the pattern of statement in the octave [first two quatrains] followed by a response. However, it often does not.

In the past, poets have often written sequences of sonnets. A sonnet sequence combines the intensity of the short poem with scope for developing a narrative or a wider exploration of a theme.

These two sonnets were part of a project by the V&A and the Poetry Book Society to commission new works inspired by the British Galleries 1500–1900. 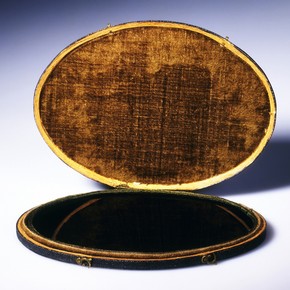 Upon a Claude Glass, by Michael Donaghy, 2003 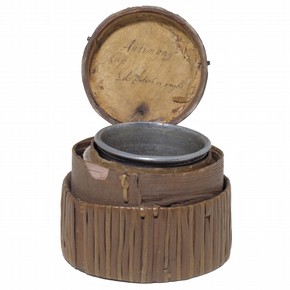 Antimony cup inside an inner leather box and an outer straw box, by The Antimony Cup Ltd, Peterborough, England, about 1720. Museum no. 1370A-1900

It is a poisoned chalice
that we raise –
but as we toast each other's healths,
and chink
our fragile cups together,
let us praise
the nation we're creating
with this drink,
as we beget a finer race
of men
and draft its customs with this
alchemy –
eternal Friday nights
of swirl and churn
of wine and air in this
antimony.
We sink a cup to purge what makes us
sick,
and sketch out shapes of Empire
on the floor,
in splash on spreading splash of pink
on brick
and blanket; wine and bile. Landlord,
one more!
One final shot to get
under our skin.
Sorry, gents, it's time.
Better out than in.

History of the sonnet

The sonnet originated in 14th-century Italy. The Italian form was perfected by the poet Petrarch, who gave his name to it. It arrived in England in the mid-16th century and is still much used by poets writing in English.