Francis Williams: A Portrait of an Early Black Writer

Francis Williams: A Portrait of an Early Black Writer 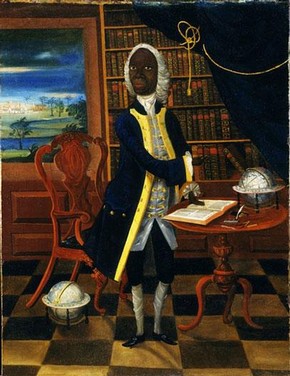 This is a portrait of Francis Williams, the first recorded black writer in the British Empire. It was painted around 1745 by an unknown artist, who was probably based in Jamaica. The artist has copied the style of formal European portraits, which he may have seen in the form of printed reproductions.

Francis Williams was born around 1700 to John and Dorothy Williams, a free black couple in Jamaica. John Williams had been freed by the will of his former master and within ten years was able to acquire property. As free blacks the Williams family were increasingly in the minority as Jamaica's sugar industry, which relied on the labour of enslaved Africans, grew over the course of the 18th century. Even less common were educated black people. However, John Williams' independent wealth ensured that Francis and his brothers received an education.

A story later evolved which suggested that Francis was the subject of a social experiment devised by the Duke of Montagu, who wished to show that black individuals - with the right education - could match the intellectual achievements of whites. The Duke is reported to have sponsored Francis to travel to England to undertake an English education at a grammar school and then at Cambridge University. However, Francis does not appear in the university's records and his family's wealth would have probably made the Duke's support unnecessary.

Francis was living in England at the time of his father's death in 1723. In Francis's absence John Williams had increased his personal wealth, which included land and slaves, through the export of sugar and tropical produce to England and the import of clothing for slaves and plantation supplies. Francis returned to Jamaica to take up his inheritance which he seems to have preferred to live off rather than to attempt to increase. At his death in 1762 the inventory of his goods, which consisted mainly of sixteen slaves, totalled £69419s. Jamaican currency (about £500 sterling).

My name is Benjamin Zephaniah and I'm a poet and writer and musician. One of the first things I did when I saw the picture was take away everything, looked right into his face and there I saw someone who looked pretty much like my father, but then when I dressed him back up again, it was all very Eurocentric. I tend to think this is a very European idea of what a scholar is, there was lots of scholars in Africa and Egypt and Timbuktu. Most of the history we get taught in schools tell us that, you know, black people generally came here in the 1950s. Now we know that there was a black presence before that. If I met him today, I would want to really know what makes him tick, what was it like for a person in his time, going to Cambridge, going to grammar school in England? My sister was one of the first black kids to go to grammar school in Birmingham and it was all in the papers. So for me, a whole heap of questions come up, how did he get to the place where he was, does he own everything that's around him? I imagine that he's someone who's probably read every one of those books that are behind him. I suspect that he probably knows more about European culture, ideas than African. If he was walking around Jamaica like that, what did the Jamaicans think of him? I just don't think he would have fitted in, I mean, he must have been in a kind of little cultural vacuum of his own. I'd love to read his poems, 'cos I mean were they poems about struggling for freedom and liberation from the white colonial masters or was it all about England's green and pleasant land and how wonderful Cambridge was. I'm sure they're not raps, I'm sure it's not ragamuffin style.

Contemporary sources report that for several years Francis kept a school in Spanish Town, Jamaica, where he taught reading, writing, Latin and mathematics. However, it is his writing and poetry on which his later reputation is based. The only surviving work by him is a poem in Latin addressed to George Haldane on his assuming the governorship of Jamaica in 1759 (a popular convention). Francis may also have written the words of the song 'Welcome, welcome, brother debtor'.

The portrait in the V&A's collection presents Francis Williams as a scholar in his study. The evidence of Francis's learning and education are clearly visible, including a celestial and a territorial globe, dividers and other instruments. Beautifully-bound books line the shelves behind him and Francis's left hand rests on an open book headed 'Newton's Philosophy'. The portrait reflects the style of European portraits of the great and good but an open window, revealing a view (probably) of Spanish Town, locates Francis firmly in a Jamaican setting.

Some writers have suggested that the painting is a caricature of Francis as he has been depicted with a large head and skinny legs. Some of Francis's white contemporaries were scornful of his intellectual abilities, including Edward Long, Francis's fullest biographer, who described him as 'haughty, opinionated … [and with] the highest opinion of his own knowledge' (History of Jamaica, 1774). However, it is likely that Long was blinded by his own racial prejudice. Other critics have considered that the 'unnaturalistic' depiction may have been intended to emphasise the subject's intellectual skills over his physical stature (Francis was alive at the time of the painting's creation and may even have commissioned it). It may, more simply, be a reflection of the artist's limited skills.

Today, Francis William's status as a postcolonial 'hero' is made problematic by the fact that he and his family profited from the labour of enslaved Africans. However, his existence as a rich, educated free black man who wrote Latin verse was a direct challenge to the theories of white supremacy which underpinned the transatlantic slave trade.

The portrait was acquired by the V&A in 1928 partly because of the furniture and fittings depicted in it as well as 'the striking story connected with the individual whom it represents'. It was formerly in the collection of Walter Samuel, 2nd Viscount Bearsted, a collector of fine art and porcelain, and was acquired through The Art Fund.

Edwards, Paul, and James Walvin. Black Personalities in the Era of the Slave Trade. 59. London: Macmillan, 1983