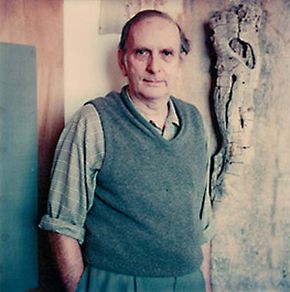 Frederick Sommer (1905-1999) made a unique contribution to 20th-century photography. Situating his photography within a wider artistic practice that included poetry, drawing and painting, Sommer pushed the boundaries of photography's subject matter. He moved from finding things to photograph to creating things for the camera, a method that has great resonance with contemporary photography.

Born in Italy, Sommer grew up in Brazil. He was precociously talented and worked in his father's office as a landscape architect before gaining a master's degree at Cornell University in the US. He returned to Brazil to form a partnership with his father but in 1930 became ill with tuberculosis.

To recuperate he went to Europe, where his interest in art and philosophy deepened. He read voraciously on modern art and aesthetics and experimented with photography alongside painting and drawing. In 1931 Sommer settled in America to work as an artist. By the end of the decade, he was concentrating on photography, although he continued to work in a variety of media throughout his career.

Sommer is noted for his mastery of photographic technique and his engagement with the ideas and practices of Surrealism.

Sommer settled in Prescott, Arizona, in 1935. In the same year he travelled to New York to show his drawings to Alfred Stieglitz, the great pioneer of modern photography. This encounter, and the introduction to other artists associated with Stieglitz's gallery, had a decisive impact on Sommer.

The following year he also met Edward Weston, whose photographs he greatly admired. Stieglitz and Weston became mentors and encouraged Sommer to pursue his interest in photography.

Another significant influence was the Surrealist Max Ernst. They first met in 1941 and became closer when Ernst also moved to Arizona in 1946.

In his portrait of Ernst, Sommer uses double exposure, combining a photograph of the artist with one of water stains on cement. In doing so, he evokes the Surrealist technique of 'frottage' (rubbing) and transforms an otherwise straightforward portrait into an uncanny homage. 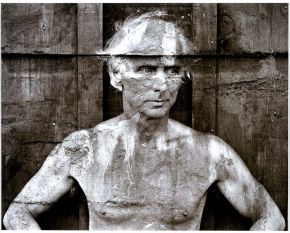 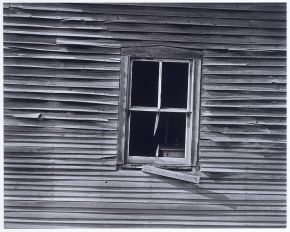 In 1946 Sommer began to photograph composed arrangements of found objects. He realised that things which at first might not appear to have anything in common can still 'meet and work together'.

In the assemblages pictured here, Sommer created unlikely connections between works of art of different periods and traditions. In Dürer Variation Sommer cut, pleated and reassembled three reproductions of engravings from Albrecht Dürer's Large Passion series. The result is an image devoid of perspective and almost Cubist in appearance.

By contrast, in the Virgin and Child, Sommer combined a lump of metal salvaged from the wreckage of a burnt-out car and a fragment from a children's book illustration to echo the famous drawing of that name by Leonardo da Vinci. 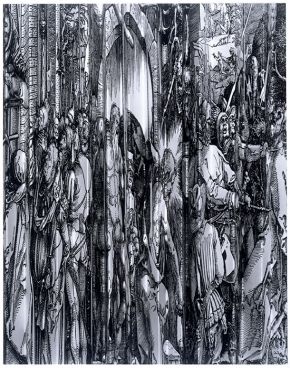 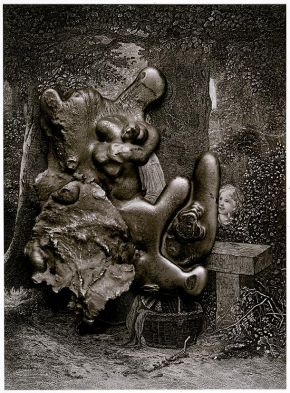 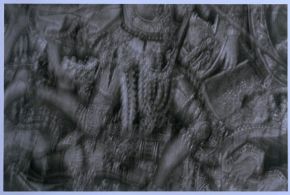 Sommer made Victoria and Albert Museum when visiting the V&A in 1960 although confusingly, he sometimes dated it to 1959.

It shows a detail from an early 16th-century Flemish tapestry, The Triumph of Death over Chastity (Museum no. 441-1983) from the V&A's collection.

By zooming in, cropping and moving the camera during the 1/5th second exposure, Sommer distorts the image to such an extent that we have only recently been able to identify its source. 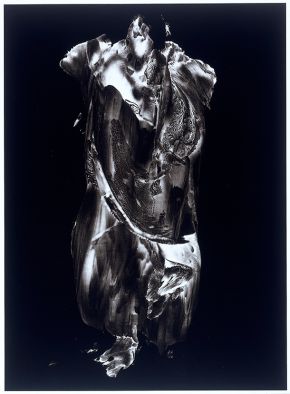 In 1957 Sommer began to make photographs using 'synthetic' or camera-less negatives he made by applying smoke or paint to cellophane and glass.

For the Paracelsus negative, he manipulated oil paint between two pieces of cellophane and pulled them apart to reveal a textured shape.

The result bears an uncanny resemblance to a human torso and led Sommer to name the photograph after Paracelsus, the 16th-century Swiss doctor, alchemist and philosopher.

Sommer identified with his holistic belief in the inseparability of the human and universal life and the need to treat both body and spirit. 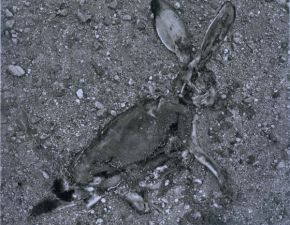 Sommer started photographing landscapes around 1939, having bought a large-format camera the previous year.

With their flattened compositions and meticulous detail, his desert scenes suggest the plans and maps he would have made when working as a landscape architect. Their patterning, minimal shadow and omitted horizon also have much in common with the 'all-over' field paintings of American Abstract Expressionist artists. Perhaps, like those paintings, these atomised landscapes devoid of human presence speak of existential unease in the wake of world war.

About the same time, Sommer also made a series of photographs of decaying animals he encountered on desert walks. Like the rabbit pictured here, which is returning to the earth as it decomposes, these photographs suggest a meditation on the cycle of life and death. 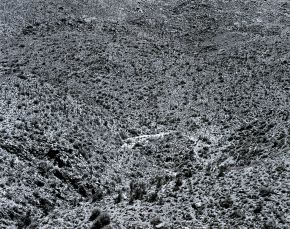 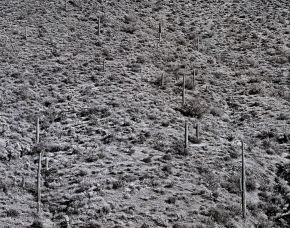 For more information about Frederick Sommer's life and work go to www.fredericksommer.org