A partnership between the V&A, V&A at Dundee and the University of Abertay Dundee. Organised in collaboration with The Association for UKInteractive Entertainment (UKIE).

Sophia George was our Games Designer in Residence here at the Museum from October 2013 - March 2014. From April 2014, as part of her residency, she was based in Abertay University developing the Strawberry Thief game, inspired by the William Morris pattern of the same name in the Museum’s British Galleries. 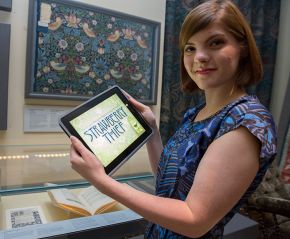 Sophia George, BAFTA winner and Chair of Swallowtail Games, was appointed as its first ever Games Designer in Residence. In her early twenties, Sophia is already an accomplished game designer, winning the 2012 BAFTA Ones to Watch Award for the prototype of Tick Tock Toys, a family-friendly puzzle game for iPhone and iPad. Following her BAFTA win, she completed Tick Tock Toys and released it to international acclaim. The game received promotional features on Apple’s App Store in over 40 countries worldwide.

To be appointed as the first ever V&A Games Designer in Residence was a dream come true and an incredible recognition of everything I’ve worked so hard for – from Dare to be Digital, to winning a BAFTA, to releasing Tick Tock Toys. Computer games are an incredible artistic and creative medium that’s often overlooked, despite them blending elements of many traditional practices – including pure art, animation, character design, architectural design, music and much more. The V&A is leading the way by embracing computer games as a creative activity and by opening up its collection for interpretation by a game designer.

I used the history of British design shown in the Britain 1500-1900 galleries as a starting point for my research, and after weeks of research decided to focus on the William Morris textile pieces that are on display in Gallery 125g. 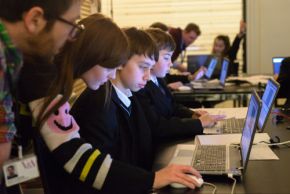 During my 6 months at the Museum, I did a lot of public engagement, inviting a variety of audiences to experience and participate in the creative process of game design though activities such as open studios both at the V&A South Kensington and the Museum of Childhood, half term workshops, an in depth project with a School and a really successful Games Jam event held over a weekend.  I have been active in calling for more women to enter the games industry and was invited to sit on BAFTA’s Working Group on encouraging equality in the industry, and so it was particularly great to see so many girls take part in these activities.

The aim of the residency was to release a finished game following a period of game production at Abertay University after my 6 months at the V&A. I wanted this game to offer a new and exciting interpretation of the V&A collections, as well as encouraging visitor participation and learning from the Britain 1500-1900 galleries.

The game I created is called The Strawberry Thief, and was inspired by William Morris textile of the same name that I became fascinated by during my research period in the British Galleries. It’s now available to download for free for iPads from the app store. I hope you like it!

Read more about Sophia's residency on her blog