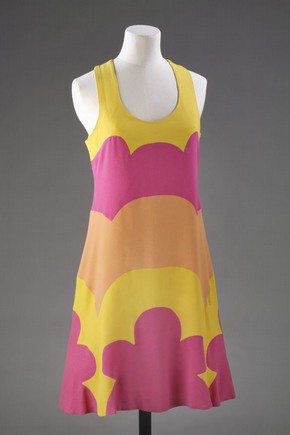 These four outfits were worn by Marit Allen in the 1960s, when she was a key figure in the world of 1960s British fashion.  As editor of the 'Young Ideas' spreads for British Vogue, Marit Allen championed innovative young designers such as John Bates and Foale & Tuffin. Her own wardrobe was full of the adventurous clothes she chose - and sometimes modelled - for her Vogue articles.

Marit Allen (1941-2007) entered fashion journalism in 1961 when she became an assistant at Queen magazine. She joined British Vogue in 1964, where she worked as a fashion editor for ten years. Her 'Young Idea' pages had a huge influence on 1960s fashion. Many young, innovative designers received their first significant exposure through Marit Allen, who not only gave them magazine space, but happily wore their clothes herself.

One such designer was John Bates, who had introduced plastic garments into high fashion as early as 1962. His 1960s designs were often adventurous and innovative, featuring bare midriffs, sheer panels, and very short hemlines.  Marit Allen insisted that Bates was the true creator of the miniskirt, rather than Mary Quant or Courregés. The Museum has acquired two examples of Bates' 1960s work, including the space-age white gabardine and silver vinyl minidress and matching coat which Marit Allen wore in 1966 to marry the film producer and agent Sandy Lieberson.

At this time Bates had designed memorable outfits for the actress Diana Rigg to wear as Emma Peel in the TV series 'The Avengers', including graphic black and white Op-Art mini  coats and accessories, and a silver vinyl ensemble comprising a bra bodice, jacket and low-slung trousers. Marit Allen's distinctive wedding outfit directly relates to the Emma Peel costumes. The other Bates dress acquired by the Museum is a fluorescent green-and-pink micro-minidress. These are the Museum's first examples of Bates' groundbreaking 1960s work.

The pink, salmon and yellow crêpe dress is an early design by the New York designer John Kloss  (1937-1987). Marit Allen featured this dress in Vogue in May 1966. Kloss, who went on to become a renowned lingerie designer, was much inspired by abstract painting. He was very interested in the optical and graphic effects of colour and pattern, as this carefully constructed bias-cut crêpe dress shows. When Yves Saint Laurent showed his 'Mondrian' collection in 1965, the New York Times claimed that Kloss had achieved the same effect two years previously. This dress is the Museum's first example of John Kloss's work.

When fashions became softer and more romantic towards the end of the 1960s, Marit Allen also followed this trend. The fourth and final outfit is a trouser suit of about 1969 from the London boutique Granny Takes a Trip. Opened in 1965 by John Pearse, Nigel Waymouth and Sheila Cohen, Granny Takes a Trip became well-known for its ever-changing surreal shop fronts and sense of exclusivity. Clothes such as Marit Allen's flounced net jacket and cream satin trousers helped promote a mysterious, nostalgic look which almost seemed to have come out of a dressing up box. The jacket is also designed to be worn as a very short micro-minidress.