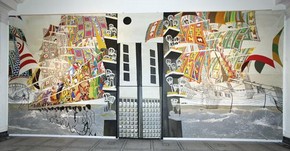 Julien Sinzogan (b. 1957, Benin) lives and works in Paris, France. After studying architecture in Tashkent and then in Paris, he began exploring the media of drawing and painting. His technique reflects the encounter of different worlds: a 'Western' world in which pictorial representation evolves according to well-defined traditions and an African world, rich in human and psychic interest. The painting 'Gates of Return' featured in the 2007 exhibition Uncomfortable Truths: the Shadow of Slave Trading was commissioned by the V&A.

Written by the October Gallery

To understand Julien Sinzogan's 'Gates of Return', one must first remember those many 'Gates of No Return' - forts and prisons built by the slave-trading nations that dotted the West African coastline during the four hundred plus years of their trading. These 'gates' represented - both literally and symbolically - the last (prison) gates through which many millions of slaves passed before being transferred aboard ships anchored offshore, the large majority of them condemned never to return to their African homelands again.

Rather than depicting these desperate points of departure, however, Sinzogan's vision attempts to reconcile and bring closure to this infamous chapter of history, one that shames us all; as much the African kings and chiefs who sold their captives and prisoners, as the European and American nations who abused them so terribly in their own 'killing fields'. 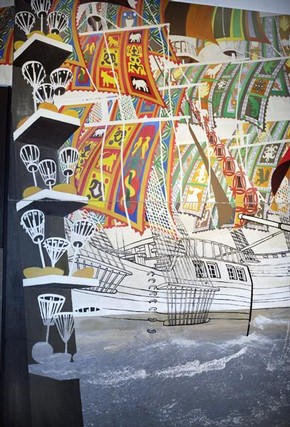 For Sinzogan, however, the real crime perpetrated was the loss, to the communities that remained, of the protective 'spirits' of those who never returned. To follow his thinking on this point, one must understand what Wole Soyinka, describes as the 'cyclical reality of the Yoruba world-view'.

The Yoruba believe that each individual being arrives from another world, that of unborn spirits, transits this world, and, at death, returns to the spirit world, to take up a critical position as an 'ancestor' figure. As long as the ancestors are properly remembered and venerated, all will be well on both sides of the divide, but an ancestor spirit scorned or, worse still, forgotten can wreak havoc on the inhabitants of this world.

The interface between these two worlds occurs during the Egungun masquerades.  Colourfully dressed dancers, wearing masks and richly embroidered costumes, 'return', at selected times of the year, ritually to enact and renew the compacts that govern the relations between the ancestor spirits and their living descendants.

The brightly-coloured patterns of the sails in 'Gates of Return' indicate that we are witnessing the disembarkation of vessels that have returned to the African coastline, from Cuba, Haiti and other American destinations, freighted with the ancestor spirits of those taken away so many years before. They are remembered, in the lower left of the painting, by the line of slaves resignedly awaiting their fate on the far side of some Gate of No Return. Above them, moving towards the Gate of Return of the title, can be seen a long line of Egungun masqueraders, wearing the richly patterned costumes whose colours have been reflected in the sails of the returning armada. 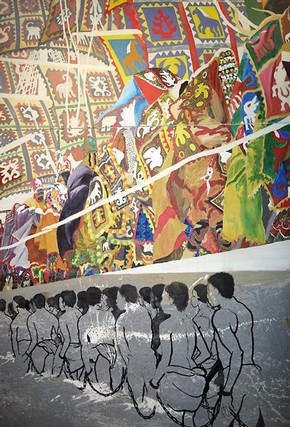 The faces of these masked 'revenants' are hidden behind transparent veils - as it is believed that when a member of the secret society of Egungun dancers incarnates an ancestor spirit, he temporarily ceases to exist in this world, and his identity must be carefully protected to ensure his subsequent safe return.

The white lines that separate the two files - of slaves and ancestors - represent the batons that are constantly used to separate the ancestor spirits from the living during Egungun performances, since physical contact between these two co-existing realms could not be tolerated. The 'black sun' that sails across the highest panel represents Yeku-meji, the second grand sign of the Yoruba system of geomancy known as iFa. Almost a trademark signature of Sinzogan's treating of these complex realities, this black circular symbol signifies remembrance of the dead by those still living.

The four hinged central panels of the piece, surrounding an actual door in the Museum wall, thus represent something that, as yet, does not exist - unopened gates that would return the disassociated ancestors to real contact with their living descendants, restoring them to their families as protective guardians.

The Egungun figures massing on the far side of the gate, seem to exert a pressure that must surely burst through into this world. Meanwhile, the phantom vessels on which they have returned become translucent, melting into a colourless intermediate state. 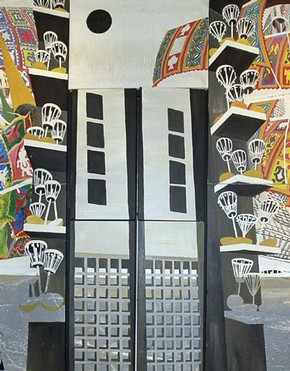 Sinzogan himself describes the panels thus: 'This is a work of the imagination, depicting something that is still to happen. Rather than being, like Schubert's famous Symphony, an unfinished piece, it is, however, a work that is yet to be brought to completion. To do this requires the spectators' active participation in a communal act of imagination that would realise an opened Gate of Return. This realisation would close the cycles of exploitation and violence done - man exploiting man - recognise the truth of our common humanity, and enable us to move forward together into a future which would ensure that such atrocities could never, ever happen again.'