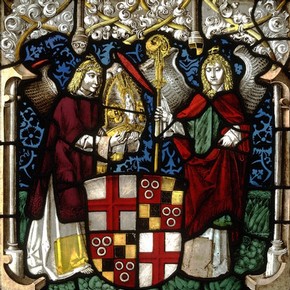 Arms of Hugo von Hohenlandenberg as Bishop of Constance, Lukus Zeiner, about 1500. Museum no. C.39-1919. Given by J. Pierpont Morgan, Jr. The technical and artistic brilliance of this stained glass panel shows Lukas Zeiner to be one of the most talented glass painters of the late Middle Ages. It shows the arms of Hugo von Hohenlandenberg, Bishop of Constance from 1496 to 1532, with angel supporters presenting his mitre and pastoral staff.

Hugo von Hohenlandenberg was Bishop of Constance between 1496 and 1532. The arms seen here are those of the Swiss bishopric of Constance quartered with that of the family von Hohenlandenberg. The arms of Constance occupy the first and fourth quarter and show a red cross on a white ground. Angels serve as supporters to the arms. Such angel supporters are often found in ecclesiastical coats of arms in mainland Europe. They bear the bishop's mitre and crosier.

Lukas Zeiner was a glass painter and glazier. He is recorded in the town records of Zurich between 1479 and 1512. At this time, the records are quite specifc and often record glass painters like Zeiner by name rather than as simply 'glass painter'. In the 15th and 16th centuries it became more common to commission secular, heraldic, glass. It was especially common in mainland Europe, where the rules as to who could claim a coat of arms were more relaxed than in England. Zeiner was a leading glass artist in the field of heraldic painting. His style featured a coat of arms with supporters within an elaborate canopy. It set the stage for similar work for the next 100 years.

Zeiner used a pale red enamel on the angels' lips. This was a new pigment introduced in the early 16th century.