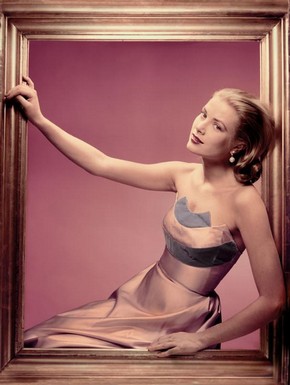 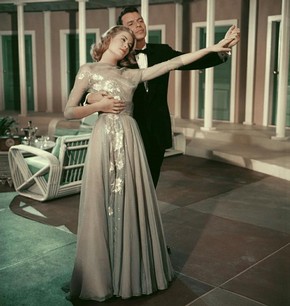 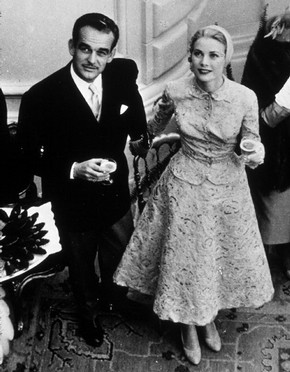 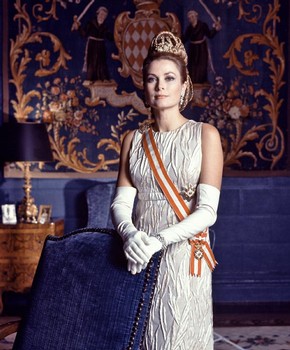 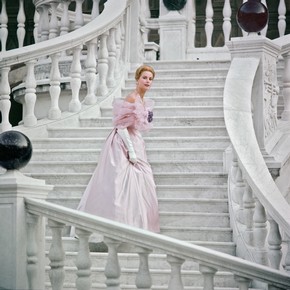 The thing that made her stand out is what we call 'style'. McCall's magazine, 1955

When people think of Grace Kelly (1929-82), one of the most photographed women of the 20th century, what they usually recall is her beauty and elegance. She rose to fame as an actress in the 1950s, starring in films by Hitchcock and others. Her image was cultivated by the movie industry, which fed cinema-goers' growing appetite for pictures of glamorous stars through magazines and newspapers.

The types varied, from voluptuous sirens and 'sweater girls' to the girl next door. The young Grace Kelly seemed to combine both qualities: wholesome, but distinctly glamorous at the same time. She came to symbolise the classic, understated look she wore both on and off screen and became known for her impeccable dress sense.

After training in New York, Grace Kelly intended to be a stage actress. But her cool beauty, subtle sex appeal and professionalism attracted the attention of Hollywood directors. From 1951 to 1956, she made eleven films, from High Noon with Gary Cooper to High Society.

British director Alfred Hitchcock unlocked her potential for playing sophisticated and sensual women on film. She was helped by her earlier work as a model, which gave her insight into how to wear costume correctly on film and use her clothes to create convincing characters. She worked closely with directors and designers on her film wardrobes. As costume designer Edith Head said, 'I have never worked with anybody who had a more intelligent grasp of what we were doing.'

Both on and off screen, Grace Kelly was an ambassador for simple American fashions such as shirtwaist dresses and casual shirts and trousers.

She also owned several understated elegant evening gowns for attending special events. Her classic clothes were promoted as 'the Grace Kelly look' by retailers, and fans emulated her immaculate grooming and sense of style.

A working trip to the south of France for the Cannes Film Festival in May 1955 changed the course of Grace Kelly's life. Although arranged as a photo opportunity for the French magazine Paris Match, her meeting with Prince Rainier III of Monaco initiated a brief courtship, and a year later, the couple were married.

The actress had often played upperclass, even royal parts on screen, which strangely anticipated her future role. The union of the 'Queen of Hollywood' with a real prince provided a wonderful story for the media, and it attracted attention and visitors to the small principality of Monaco. Television and print coverage of the event was seen around the world.

When she married, Grace Kelly gave up her film career. MGM's last film of her was at her wedding. The law in Monaco required both a civil and religious marriage ceremony, and these two occasions, as well as the necessary preparations, were followed in every detail. The resulting pictures helped to cement Grace Kelly's image, as she was transformed from a make-believe princess into a real one.

As Princess of Monaco, Grace Kelly devoted herself to her new life, focusing on her husband and family, but also using her celebrity and considerable drive to support the principality, and many charities and cultural causes.

As in her earlier public roles - as model, actress, bride - she understood the need for clothes that made sense of her new position. Her approach was typically candid: 'Our life dictates a certain kind of wardrobe.' Yet her interest, born of her essentially 'dramatic' approach to life, was always in fashion as an expression of character. 'I think it is important to see the person first and the clothes afterwards,' she said.

With a keen sense of her state function, Grace Kelly, like members of other European royal families, patronised the grand couture houses of Paris. She became especially associated with the French fashion house Christian Dior, which supplied her with many clothes that were suitably formal, but modern and eye-catching.

Princess Grace remained faithful to the classic, streamlined style she had favoured as an actress. But she adapted it to the changing silhouette of the 1960s and 1970s, developing a suave look incorporating fine jewellery and elaborate hairstyles. Even as she gracefully ceded the fashion lead to others, her image remained the subject of fascination, and she continued to be featured on magazine covers across the globe. Princess Grace's tragic death in a car accident in September 1982 shocked the world.

Nearly 30 years on, the elegance Grace Kelly captured in her public image has enshrined her as a style icon. She remains very much remembered and admired today. Books are published about her, her films studied. Pop stars from Madonna to Mika can sing of the 'wannabe' glamour Grace Kelly inspires in her fans. The hit television series Mad Men cites her look as an influence; Kate Winslet can adopt an identifiable Grace Kelly style. In 2009, Vera Wang designed a variation on Kelly's famous wedding dress. She described it as 'majestic' and 'demure' - twin aspirations Princess Grace herself would surely have concurred with.

This content was originally written in association with the exhibition 'Grace Kelly - Style Icon', on display at the V&A South Kensington from 17 April to 26 September 2010.