History of the Ardabil Carpet

History of the Ardabil Carpet

Why the Ardabil Carpet was made

One of the main sights in the town of Ardabil in north-west Iran is the shrine of Shaykh Safi al-Din Ardabili, who died in 1334. The Shaykh was a Sufi leader, who trained his followers in Islamic mystic practices. After his death, his followers remained loyal to his family, who became increasingly powerful.

In 1501, one of his descendants, Shah Isma'il, seized political power. He united Iran for the first time in several centuries and established the Shi'i form of Islam as the state religion. Isma'il was the founder of the Safavid dynasty, named after Shaykh Safi al-Din. 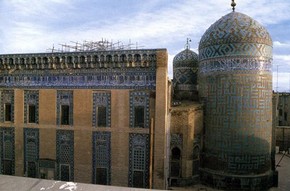 The shrine of Shaykh Safi al-Din Ardabili (the impressive tomb tower on the right in this photograph). The other shrine buildings were added around it. 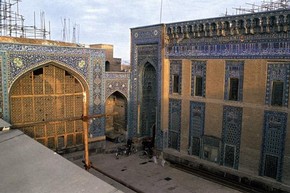 Anteroom to the tomb of Shaykh Safi al-Din, commonly called the Hall of Lamps

The Safavids, who ruled without a break until 1722, promoted the shrine of the Shaykh as a place of pilgrimage. In the late 1530s, Isma'il's son, Shah Tahmasp, enlarged the shrine, and it was at this time, too, that the carpet was made as one of a matching pair 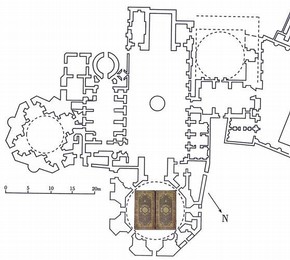 Plan of the shrine at Ardabil, showing where the carpets were situated

The completion of the carpets was marked by a four-line inscription placed at one end. The first two lines are a poetic quotation that refers to the shrine as a place of refuge:

The third line is a signature, 'The work of the slave of the portal, Maqsud Kashani.' Maqsud was probably the court official charged with producing the carpets. He was not necessarily a slave in the literal sense but called himself one to express humility, while the word for 'portal' can be used for a royal court or a shrine. Perhaps Maqsud meant both, as in this case the court was the patron of the shrine.

The Ardabil Carpet  and the V&A

The two Ardabil carpets were still in the shrine of Shaykh Safi al-Din in 1843, when one was seen by two British visitors. Thirty years or more later, the shrine suffered an earthquake, and the carpets were sold off, perhaps to raise funds for repairs. The damaged carpets were purchased in Iran by Ziegler & Co., a Manchester firm involved in the carpet trade. Parts of one carpet were used to patch the other. The result was one 'complete' carpet and one with no border.

In 1892, the larger carpet was put on sale by Vincent Robinson & Co. of London. The designer William Morris went to inspect it on behalf of this Museum. Reporting that the carpet was 'of singular perfection … logically and consistently beautiful', he urged the Museum to buy it. The money was raised, and in March 1893 the Museum acquired the carpet for £2000.

The second, smaller carpet was sold secretly to an American collector, and in 1953 it was given to the Los Angeles County Museum of Art. The Ardabil carpet hung on the wall in this gallery for many years. In 2006, the Museum created the extraordinary case in the centre of the gallery so that the carpet could be seen as intended, on the floor. To preserve its colours, it is lit for ten minutes on the hour and half-hour. 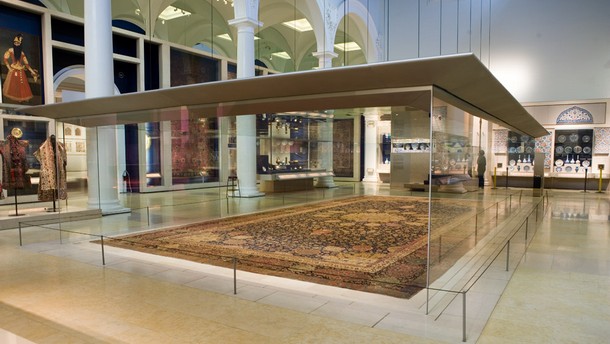 The Ardabil Carpet on display in the Jameel Gallery, V&A