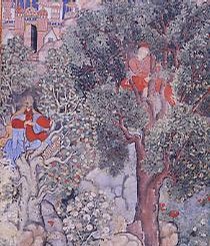 The Victoria and Albert Museum has one of the most renowned collections of Mughal art in the world. This is the story of one of the highlights of the collection: the series of paintings done for the Emperor Akbar to illustrate the Adventures of Hamza.

The V&A acquired folios from the Hamzanama because of the keenly observant eyes of Sir Caspar Purdon Clarke (1846-1911). He found these paintings, of crucial importance in the development of Mughal painting, stopping up the chinks in the windows of a curiosity-shop in Kashmir, while visiting the region to buy objects for the Museum.

The hero of the Hamzanama is based on the character of Amir Hamza, an uncle of the Prophet Muhammad. He became the hero of popular legends told by story-tellers that presented him as an intrepid warrior who travelled the world intending to spread the word of Islam. His adventures were many and varied, as he battled against giants, demons and strange creatures.

Akbar (1542-1605) was the third of the Mughal emperors of Hindustan. The first major project of his newly established royal painting studio was the preparation of the Hamzanama. 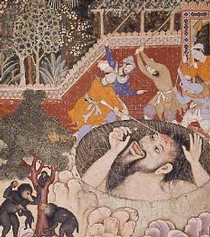 The series of 1400 paintings on cloth may have been produced in either 12, 14 or 17 volumes, and was directed by two Iranian master artists, Mir Sayyed Ali and Khwaja Abd-as Samad. The work involved over a hundred artists, gilders and bookbinders, and to complete took fifteen years (from 1562 to 1577).

A new Mughal style evolved, combining elements from the regional traditions of the Indian subcontinent with an Iranian compositional framework and distinctively Iranian motifs such as ornate architectural settings, finely patterned carpets, roofs and tiles, fairies (peris), flowering cherry and cypress trees. The richness of detail and bold blocks of colour spill over the pages without much linear perspective. The paintings are unusually large, measuring around 74 x 58 cm. About 140 of these illustrations are known to survive and the V&A possesses 27 (including 3 fragments).

Sir Caspar Purdon Clarke, architect, archaeologist and museum director, had been on purchasing expeditions on behalf of the Museum to Turkey, Syria, Greece, Spain, Italy and Germany. 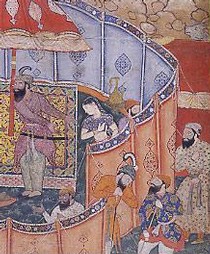 He spent two years as a special commissioner in India, which is when he acquired the Hamzanama. Expeditions to acquire objects were planned meticulously. Clarke had a special uniform made for him and every effort was made to give him an official aura. He was given £1 per day for expenses plus a special daily allowance of £1.10.

The Museum’s Indian Section owed its structure to his organising capabilities, and he was Director of the Museum from 1896 to 1905. A practising architect, he also lectured on architecture as well as eastern arts and crafts and arms and armour. The last stage of his distinguished career was as Director of the Metropolitan Museum in New York (1905-11).