History of Cloisonné in Japan 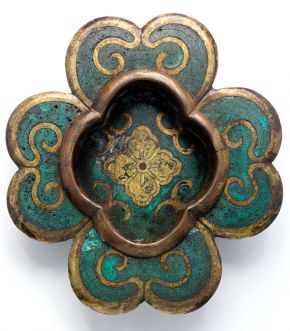 With the exception of an enamelled mirror in the collection of the Shōsōin, the repository of Imperial treasures in Nara, there are few early examples of Japanese enamelling apart from small door fittings with enamelled designs in the Phoenix Hall (1053) of the Byōdōin Temple near Kyoto, and the cloisonné enamel-decorated architectural fittings used by the shōgun Ashikaga Yoshimasa (1436–90) in his Higashiyama retreat in eastern Kyoto (now the Ginkakuji temple).

Enamelling was employed primarily on architectural fittings, for example hikite (door-pulls) and kugi-kakushi (decorative nail covers) as well as for the decoration of small objects such as suiteki (water-droppers), part of writing sets and used in the preparation of ink.

There had long been a demand among the samurai for fine decoration of sword fittings and cloisonné enamels were used on tsuba (sword guards). The finest of these were made by the Hirata School, founded by Hirata Dōnin (died 1646) which was active well into the nineteenth century. 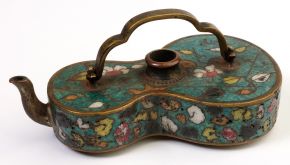 The renaissance of Japanese cloisonné manufacture is credited to the former samurai, Kaji Tsunekichi (1803 - 1883) of Nagoya in Owari Province (modern Aichi Prefecture). Kaji, like many other samurai of his time, was forced to find ways to supplement his meagre official stipend. It is believed that around 1838 he obtained a piece of Chinese cloisonné enamel and by taking it apart and examining how it was made, he eventually produced a small cloisonné enamelled dish.

By the mid-1850s he was sufficiently confident take on pupils and by the late 1850s was appointed official cloisonné maker to the daimyō (feudal chief) of Owari. He based his designs on the motifs and colour-schemes of Chinese cloisonné enamels and his early works are characterised by the use of a larger number of background wires. These were decorative, forming an integral part of the design, and practical in that they prevented the enamels from running during firing. 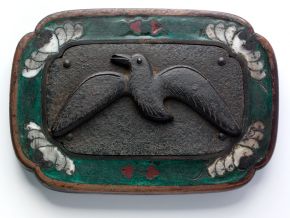 One of Kaji’s pupils was Hayashi Shōgorō (d.1896), a craftsman celebrated for the fact that his pupils were in turn the teachers of many of the later masters of cloisonné enamelling, of whom the most important was Tsukamoto Kaisuke (1828-1887). Kaisuke’s experiments enabled him to create a picture of Nagoya Castle, the first time a purely representational design had been realised in cloisonné enamels.

Kaisuke is believed to have been responsible for the discovery, some time around 1868, of the technique of applying cloisonné enamels to a ceramic vessel. However, this was a relatively short-lived innovation, and was never very popular, probably because enamels on porcelain tended to be dull and dirty in appearance and were liable to crack. Nevertheless, some fine and durable examples were produced.

Kaisuke in turn taught Hayashi Kodenji (1831-1915), a craftsman who became one of the most influential of cloisonné makers. Kodenji set up an independent cloisonné workshop in Nagoya in 1862 and trained other craftsmen. He remained at the forefront of cloisonné manufacturing in Nagoya. 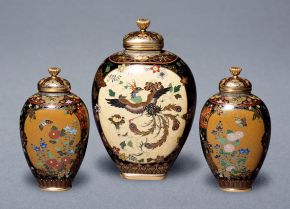 In 1871 the Nagoya Cloisonné Company was established at Toshima. Their technological advances resulted in the company winning a first prize at the Vienna Exhibition of 1873.

Many cloisonné-manufacturing companies sprang up in and around Tōshima and the area rapidly became Japan’s main centre of cloisonné production becoming known as Shippō-chō (Cloisonné town). It has been estimated that at its peak the cloisonné manufactories of Tōshima were producing seventy percent of all cloisonné enamels in Japan.

By 1875, Kaisuke had left Nagoya to become the chief foreman of the Ahrens Company in Tokyo. Ahrens was one of many companies set up under the Meiji government’s programme whereby western specialists were invited to help modernise Japan’s existing industries.

The chief technologist of Ahrens, which had exhibited one of Kaisuke’s works at the Vienna Exhibition, was the German chemist Gottfried Wagener who introduced modern European enamelling technology to Japan.

In 1878 Wagener moved to Kyoto where he met the former samurai and cloisonné artist Namikawa Yasuyuki (1845-1927). Yasuyuki began his career around 1868 and worked with the Kyoto Cloisonné Company from 1871 to 1874.

He established his own studio and exhibited his work at national and international expositions. The most significant result of the collaboration of Wagener and Yasuyuki was the creation of the semi-transparent mirror black enamel that became the hallmark of most of Yasuyuki’s subsequent work.

Yasuyuki’s cloisonné enamels are characterised by the skilful use of intricate wirework and superb attention to detail and the designs on his earlier pieces are relatively traditional, consisting mainly of stylised botanical and formal geometric motifs. Much of his later work tends to be more pictorial with scenes from nature and views of landmarks in and around Kyoto.

Yasuyuki continued to improve his technical and artistic skills and in 1896 he was appointed Teishitsu Gigei’in (Imperial Craftsman) to the court of the Emperor Meiji. This was an important position and guaranteed a domestic market for his work while simultaneously increasing its value and price. He retired in 1915 and his company closed soon afterwards. 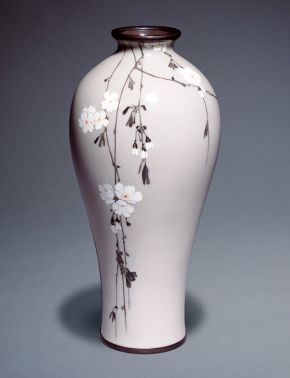 Namikawa Sōsuke (1847-1910) was another important cloisonné artist and was also appointed Imperial Craftsman to the court of the Emperor Meiji in 1896. To the confusion of western visitors to Japan, Sōsuke and Yasuyuki were unrelated, the family name ‘Namikawa’ being written with different characters.

Sōsuke originally worked for the Nagoya Cloisonné Company but moved to run their branch in Tokyo. He contributed to national and international expositions and perfected a distinctive style of decoration in which his enamelled designs gave the appearance of reproductions of ink paintings. Around 1893 Sōsuke, a man not shy to tell the world about his achievements, began to use the ‘sakigake’ (pioneer) seal on his work; there is no doubt that he had raised Japanese enamelling skills to new and truly remarkable heights.

The most important company producing cloisonné enamels in Nagoya and the surrounding area was the Andō Company. Its foreman from 1881 to 1897 was Kaji Satarō, the grandson of Kaji Tsunekichi who was succeeded by Kawade Shibatarō (1856 – c.1921). Kawade introduced and developed many technical innovations on which the Andō Company’s success was based, the most important of which is called moriage (piling-up). This painstaking technique involved building up layers of enamel to produce a three-dimensional effect and was ideally suited to natural subjects such as plants and flowers. 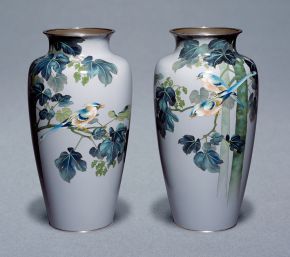 The Andō Company developed the technique called plique-a-jour (shōtai-jippō in Japanese). Andō Jūbei had seen examples of this at the Paris Exposition of 1900 and brought back with him a piece by Fernand Thesmar. This was analysed by Kawade, who perfected and further developed the technique. In shōtai-jippō an object is prepared as for cloisonné enamelling, though with the wires being fixed only by glue. The interior is not enamelled and once the piece has been completed clear lacquer is applied to its polished exterior to protect it from the acid which is used to dissolve the copper body. The resulting fragile object consists of semi-transparent panels of enamel held together by a pattern of fine wires.

The Andō Company won many prizes at world exhibitions and around 1900 was appointed by the Imperial Household as official supplier of cloisonné objects for imperial gifts. The Andō Company is unique in that it is the only manufacturer with its roots in the Golden Age still producing high quality cloisonné enamels.

Until its closure in the 1990s, the Inaba Company of Kyoto was another important survivor of the Golden Age. Founded in 1886 by Inaba Isshin, a former samurai who began working in enamels in 1875, the company’s output was eclectic and combined designs and techniques used by both Kyoto and Nagoya makers.

The third and fourth generation heads of the family still live in Kyoto and are invaluable sources of information about the history of cloisonné making in Japan.

Following the recent demolition of their workshop (the site is now a parking lot) their archives, together with tools and enamelling materials, are preserved in the Museum of Kyoto.