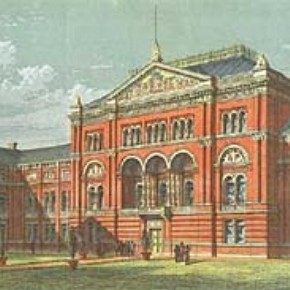 The original Museum entrance now in the garden

The Silver collections are displayed in the Victoria and Albert Museum’s original Ceramic galleries. When this block of the Museum was completed in 1869, it was one of the grandest public spaces in London. The terracotta facade and loggia, which can be enjoyed from the Garden, was designed as the main entrance to the Museum. The Museum buildings erected between 1857 and 1886 were conceived to reflect the history of design and craft.

From the 1820s, European museums had already experimented with this approach. At the Louvre, there were ceiling paintings showing the ancient world and at the Neues Museum, Berlin, there were murals depicting Teutonic myths. But at South Kensington the scheme was more ambitious. Both inside and out the decoration was to be not only awe-inspiring but also to serve as an encyclopaedia of the Arts and Sciences.

The Ceramic Staircase, the Refreshment Rooms, the Ceramic Galleries and Lecture Theatre were all decorated in the fashionable revived Italian Renaissance manner, regarded as the peak of artistic achievement. The friezes were painted with the names of great pottery and porcelain centres from around the world, from prehistoric China to mid 19th-century Germany. The enfilade of columns, encased in Minton's 'Renaissance Majolica', celebrated the potter's craft and were girdled with ceramicists' names. We have reconstructed two, commemorating Xanto and Pousa. 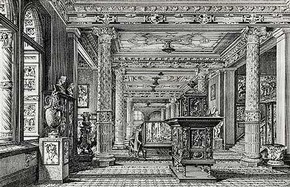 The Ceramics Galleries in their original splendour, 1875

Captain Francis Fowke, Royal Engineer, designed the Lecture Theatre block, as part of the first phase of the Museum, between 1865 and 1869. Godfrey Sykes was the modeller, followed by James Gamble, Reuben Townroe and Frank Moody. The encaustic tile floors and majolica-clad columns that ran through the galleries were manufactured by Minton, Hollins & Co. While some reviews praised them as 'admirable work', others were less complimentary: 'This is but a sham art, just as they are sham columns - a casing of crockery built up around a brick core' (Building News, 1870).

This rich polychrome scheme fell out of fashion early in the next century. In 1914, despite public outcry and a campaign in The Times, the columns were stripped, the floor tiles removed and the walls painted in light colours to capture a French 18th-century feeling. In 1935, the columns and north windows were bricked up to create a series of five rooms, destroying Fowke's concept of a long sweeping gallery flanked by columns. The decorated ceilings and friezes by Frank Moody were painted over in white after the Second World War and finally blinds installed in the 1950s to cut out the sunlight, destroyed the outlook over the garden. 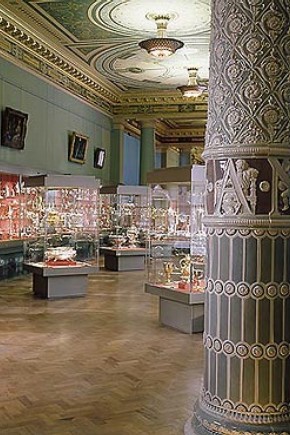 The Silver Galleries from the western entrance

In 1974, some tiles were rediscovered in the Museum basement, enabling us to reconstruct two of the Minton columns. The other column cores recently revealed in Rooms 66 and 68 have been given plain Tuscan profiles as in 1914. The present celadon green walls are a return to the original colour, which Henry Cole regarded as relaxing when contemplating art. 650 books of gold leaf were used on each restored ceiling.

In restoring the galleries and planning the displays, clues were taken from the original 1860s installation to help meet current needs. The heating is tucked inside the plinths which incorporate an original console detail. The lighting exploits advances in lighting technology, using mercury discharge lamps which are energy saving and safe. Heat escapes through the original ventilators in the ceiling. In the showcases, fibre optics provide a highly efficient modern light source. A single lamp powers each display.

The 1868 patent gasoliers, or gas burners, developed for the Albert Hall, Houses of Parliament and other public buildings provided the model for the light fittings.

Silver is not affected by strong light, so we have returned to Henry Cole's practice of placing cases on the window sills. The windows have been filmed to reduce the light level and allow us to hang paintings that relate to the history of silver. 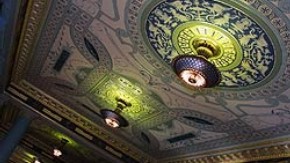 The restored ceiling in Room 69, the eastern end of Silver galleries

With the painted ceilings again revealed, the restoration of the galleries has recaptured much of the magnificence of the original.