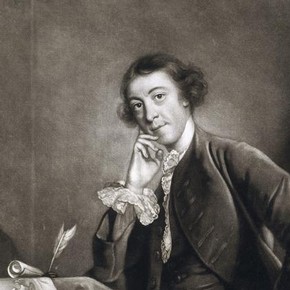 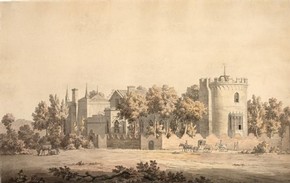 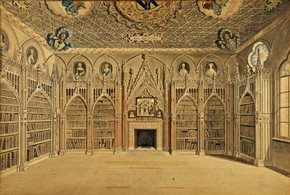 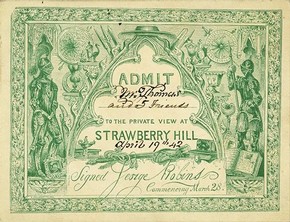 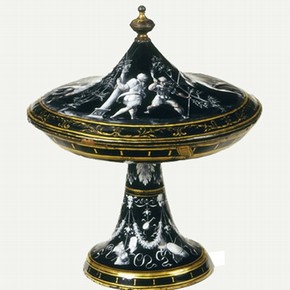 Horace Walpole (1717–97) was the youngest son of Sir Robert Walpole, Britain's first Prime Minister. An influential historian, collector, social commentator and man of letters, his writings have crucially shaped our view of the time in which he lived. His fascination with history and art led him to build a collection encompassing Renaissance maiolica, Holbein drawings, arms and armour, and works by contemporary 18th-century artists such as Sir Joshua Reynolds and Anne Seymour Damer.

Over a period of some 40 years (1747–90) Walpole turned the 17th-century house at Strawberry Hill in Twickenham, Surrey, into what he called 'a little Gothic Castle'. It quickly became a famous tourist attraction. Walpole himself led the design of the house, interiors and gardens, together with friends such as Richard Bentley, and professional architects such as John Adam. The house provided an atmospheric setting for his unique collections.

Strawberry Hill was built in stages from the late 1740s to the 1790s and used by Walpole both for entertaining and as a private retreat. Its Thames-side setting in Twickenham, a village well known for its fashionable summer villas, meant it was also a popular tourist attraction.

The first phase of Strawberry Hill had a series of grey or stone-coloured Gothic 'antiquarian interiors' illuminated by old stained glass. The Library, built in 1754, was the most seriously Gothic of all the rooms at Strawberry Hill. It was the centre of Walpole's antiquarian and scholarly endeavour. The bookcases were designed by John Chute who based them on a doorway in old St Paul's Cathedral. The design of the complex chimneypiece was taken from medieval tombs in Westminster Abbey and Canterbury Cathedral.

The rooms in the State Apartment mainly provided large formal spaces for entertaining. They were very different from the Gothic style of the earlier house. There were significant medieval influences but the overall decoration reflected modern state rooms in the classical style.

After Walpole's death in 1797, Strawberry Hill passed to his cousin's daughter, Anne Damer. In 1842 the contents were dispersed in one of the most famous sales of the century. Walpole's letters and political memoirs have now become major historical sources. This ticket admitted the holder and friends to the private view of the 1842 auction sale at Strawberry Hill.

For Walpole, physical objects were doorways to the past. Most of the things at Strawberry Hill told at least one story. Walpole put great emphasis on the provenance of the objects he assembled and delighted in being able to add his name to the list of famous collectors reaching back to the 16th century.

Walpole's collection of ceramics was the largest and most varied in England. It ranged from ancient Greek pots and masterpieces of Renaissance maiolica and earthenware through to modern porcelain.

Walpole believed that his collection of enamels and miniatures was the 'largest and finest in any country'. By his death in 1797, he owned around 130 miniatures, painted in watercolour on vellum or ivory, and nearly 40 enamels. Walpole's account of miniatures and enamels in the Anecdotes of Painting established their reputation as a serious art form.

From the 1770s, Strawberry Hill became famous for 'Works of Genius … by Persons of Rank and Gentlemen not artists'. Most of these amateur artists were women, chief among them the painter and designer Lady Diana Beauclerk and the sculptor Anne Damer.

Horace Walpole's Anecdotes of Painting in England, published by the Strawberry Hill Press between 1762 and 1780, was the first history of English art. Walpole modelled it on Giorgio Vasari's Lives of the Artists, and it still forms the basis of English art history. In its complete form the Anecdotes included sections on sculptors, architects and engravers, and an 'Essay on Modern Gardening'.

This content was originally written in association with the exhibition 'Horace Walpole & Strawberry Hill', on display at the V&A South Kensington between 6 March and 4 July 2010.

The exhibition was organised by the V&A, The Lewis Walpole Library, Yale University, and the Yale Center for British Art.

To explore more of Walpole's original collection, visit the Lewis Walpole Library database of objects in their collection.