The History of the Musical Instrument Collection

The History of the Musical Instrument Collection 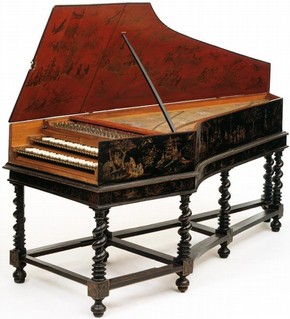 The V&A has some of the most beautiful instruments to be found in any public collection in the world. At the outset, the museum's aim was to acquire the best objects from every country and every period in history so as to help British manufacturers improve their designs and compete more successfully with their commercial rivals overseas. This applied to musical instruments as much as to ceramics, sculpture, textiles or furniture.

Musical instruments have been acquired more as works of outstanding beauty than of musicological importance. This might at first seem odd, especially when we consider that sound is the most important aspect of a musical instrument. However, working instruments tend to be discarded once they are no longer playable. Exceptionally beautiful examples are more likely to be preserved, even if they end up as family mementoes or artists' props.

The founders of the V&A intended that designers and craftsmen could copy the decoration on the instruments and apply them to a piece of furniture or other woodwork, and they are just as important to the furniture historian of today as they would have been to cabinetmakers in the 1860s. Lavishly decorated instruments, such as the French horn shown below, can also be just as important to the musicologist. 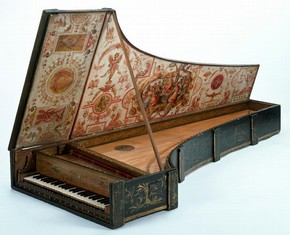 The first instrument the Museum acquired was a theorbo-lute made by Jacob Heinrich Goldt of Hamburg in 1734 , bought from an unknown source for £8 in 1856, a year before the V&A moved to its present site in South Kensington.

The earliest instrument, with a known original history, is a harpsichord made in 1574 by Giovanni Baffo of Venice for the Strozzi, a leading banking family from Florence. Henry Cole, the first director of the V&A, acquired it in 1859 for the remarkably low sum of £6 - 7s (£6.35). He bought it from William Blundell Spence, who at that time was the leading English dealer in Renaissance works of art, and based in Italy.

Other instruments come from a number of different sources, ranging from dealers and collectors to owners of historic houses. The jewelled spinet made by Annibale Rossi in 1577, had originally belonged to a Milanese nobleman by the name of Carlo Trivulzio. It finally ended up in the collections of Antoine-Louis Clapisson (1806-66), a composer and music teacher, before being bought for £1200 by the South Kensington Museum in 1869.

Two woodwind instruments, one an ivory oboe by Giovanni Maria Anciuti of Milanand the other an anonymous tortoiseshell-covered recorder from Naples, once belonged to Gioacchino Rossini (1792-1868), the famous Italian composer. They once formed part of a trophy of musical instruments which hung on the wall of the salon of his Paris apartment. These, together with the Taskin harpsichord, mentioned above, and a very fine ebony and ivory theorbo by Matteo Sellas, dated 1637, were acquired in 1869 from the shop of a Monsieur Bauer of 93 Rue d' Autin in Paris.

Bauer's instruments were bought on the recommendation of Sir Matthew Digby Wyatt (1805 - 1886), a highly successful architect. He held several official posts, including that of surveyor to the East India Company. Although he made no claims to be a musicologist, Wyatt had a flare for finding highly decorative instruments. His purchases included the glass virginals and the Italian Octave Spinet. His reports were often embellished with beautiful drawings, which no doubt helped persuade those who would otherwise have balked at the prices asked.

The most important single collection of musical instruments in the V&A was formed by Carl Engel of Hanover (1818-1882). He organised the Special Exhibition of Ancient Musical Instruments at the Museum in 1872, and in 1874 he published his most important work, the Descriptive Catalogue of the Musical Instruments in the South Kensington Museum. This has formed the basis for subsequent catalogues of the Museum's instruments.

In 1882 Engel sold his personal collection of 201 instruments to the South Kensington Museum for £556 - 6s (£556.30). These included European folk instruments like the Spanish bandurria , Northumberland bagpipes and Norwegian Hardanger fiddle, as well as one of the earliest surviving banjos. He also owned some highly decorative instruments like the Barthold Fritz clavichord and the Medici chitarrone made by Matteo Buechenberg in 1614. 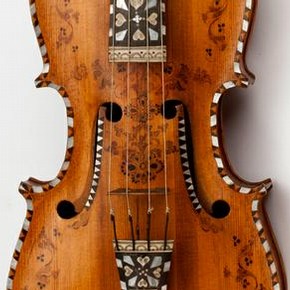 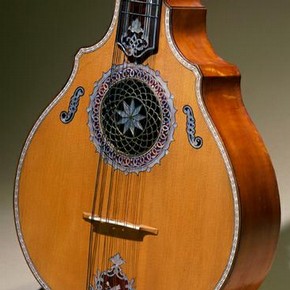 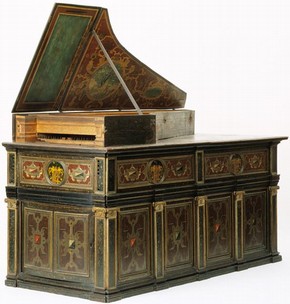 In 1889 Mrs Lewis Marianne Luard-Selby sold Ightham Mote, Kent, which had been in her family since 1591. Following the sale, she gave the V&A a claviorgan (Museum no. 125-1890), a combination of organ and harpsichord, that had stood in the chapel of this house. It was made by Lodewyk Theewes of London (formerly from Antwerp) in 1579, and is the earliest known dated English keyboard instrument.

All too often surviving objects are erroneously associated with figures in history, but the 'Queen Elizabeth Virginals' almost certainly did belong to Queen Elizabeth I. It is dated 1594 and bears the cypher of a raven holding a sceptre, the personal emblem of her mother, Queen Anne Boleyn. Richard Connock, one of the chief agents in the Duchy of Cornwall for Henry, Prince of Wales (1594-1612), acquired it as a royal perquisite and bequeathed this instrument to his godson, Richard Vivian in 1620. It resurfaced again in 1798 at Fisherwick Park, Staffordshire, the residence of Lord Spencer Chichester, and was eventually acquired by the Revd Nigel Gresley, of Milbourne St Andrew, Blandford, Dorset, who sold it to this museum for £125 in 1887.

Other important English instruments include a John Broadwood piano of 1883, owned by Alexander Ionides, an Anglo-Greek merchant and collector of pre-Raphaelite paintings. This was designed and decorated by Kate Faulkner of William Morris's firm, using sketches by Sir Edward Burne-Jones. One of our most recent acquisitions is an octave spinet made in 1950 by Robert Gobel, a leading figure in the revival of Early Music following theSecond World War. He made it for Bruno Turner, a specialist in Spanish Renaissance music. Four years later it was bought by Professor Patrick Lawther of St Bartholemew's Hospital, who generously gave it to the Museum in 1994.