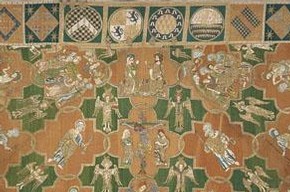 During the middle ages embroidery was a popular way of decorating luxury textiles. The rich and powerful medieval Church owned huge amounts of embroidered textiles, often donated by wealthy. Documents show that embroidery was commissioned for clothing for royalty and the nobility, but very little of this survives. Furnishings were probably decorated with applied embroidered motifs.

Opus Anglicanum (English work) is now used as the generic name for ecclesiastical embroidery which was produced in England from the early Middle Ages until the Reformation. The majority of the surviving pieces date from the 13th century onwards, together with a small number of earlier pieces. Much secular embroidery was also produced but virtually nothing survives.

Although nuns and other amateur needlewomen produced embroidery from as early as the 8th or 9th century, practically all the surviving examples of Opus Anglicanum were worked by professional embroiderers, both men and women, in workshops generally run by men. The names of some of these embroiderers, both male and female, are recorded in contemporary documents.

At its height, from the mid-13th century to the mid-14th century, Opus Anglicanum was much sought after throughout Europe and the 1295 Vatican Inventory lists over 100 examples. Opus Anglicanum at this time was as important as painting and the work of goldsmiths.

Church vestments, including copes, chasubles and altar hangings, were decorated with embroidery, which was usually worked on linen, silk or velvet with silk and metal threads, pearls and other jewels. Underside couching, a technique used mainly during the peak period of Opus Anglicanum, made the gold thread appear to be in an unbroken line on the face of the vestment or hanging, as no couching threads are visible on the surface. Split stitches worked in spirals were used to form the contours of the faces.

Magnificent vestments had sacred scenes or figures of saints on them, which could be seen and understood by a largely illiterate population. Scenes on copes were contained within design frameworks like those on paintings and stained glass, and were placed in such a way that the figures would appear upright when the vestment was worn, often with a key image such as the Coronation of the Virgin at the top. After the Reformation, the church had no use for embroideries with sacred subjects and they were no longer made. Vast stocks of medieval examples were destroyed to recover the pearls and the gold thread, or exported to Catholic countries overseas. A few were preserved by English Catholic families. 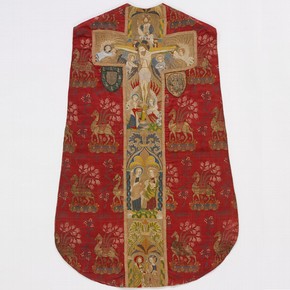 From the end of the 1300s, the techniques used by embroiderers began to change because of competition from European embroidery workshops, and changing requirements. In the 1400s, Italian weavers were producing luxury silk and velvet patterned fabrics and importing them to England in large amounts. A fine example with metallic threads and motifs of camels is used in the Erpingham Chasuble.

Embroiderers adapted their work by developing simpler techniques which could be produced more quickly and applied to the fine Italian cloths. This included applied work - small motifs embroidered on linen then cut out and stitched onto a finer cloth background, or larger bands of embroidery used as orphrey bands sewn onto the background cloth.

Unlike today, designers of embroidery are often not known. Professional embroiders certainly worked with artists for specifically commissioned pieces, and there was a repertoire of designs which they used. Embroiderers may have also adapted or modified the designs. Patterns, styles and motifs tend to reflect the fashions of the time and the same styles appear in different art forms. During this period, embroiderers in professional urban workshops produced most of the highest quality embroidery. Workshops were mostly in London and were usually run by men and employed both men and women. The embroiderer's work was regulated by informal Guilds, to ensure the highest standard of work.

Whereas medieval embroidery is known almost exclusively through ecclesiastical examples, Tudor embroidery is almost entirely secular. Professional workshops had long experience of secular embroidery and found little difficulty in producing the new styles of ornament influenced by the Renaissance. Workshops were likely to have their own draughtsmen to produce designs and numerous pattern books were available. Woodcuts and engravings in contemporary herbals and bestiaries and other illustrated books were also used as sources.

A large number of embroidery stitches were used in the Tudor and Stuart periods, but the most common were satin and split stitches (worked in silks usually on a silk ground) and tent, cross and gobelin stitches (worked on linen canvas mesh, known as canvas-work embroidery, where the shape of the stitches is dictated by the open plain weave of the base fabric). Canvas-work embroidery is often sub-divided according to the use of different threads and stitches.

Black embroidery on a white ground became known as blackwork. A limited range of linear stitches was used. Some blackwork pieces used a variety of diaper fillings (an all-over pattern of diamond shapes). Towels, table and cupboard cloths, coverlets and pillows were decorated and shifts, shirts, caps, coifs, jackets and other linen accessories were also listed in inventories.

Multi-coloured silks were often combined with metal thread and spangles (an early name for sequins) and worked in a greater variety of stitches, sometimes including three-dimensional or raised effects. These embroideries were very English in character: coiling stems with floral motifs, roses, carnations, honeysuckle and other typically English flowers interspersed with birds and beast, caterpillars and butterflies, formed the basis of the most popular designs. 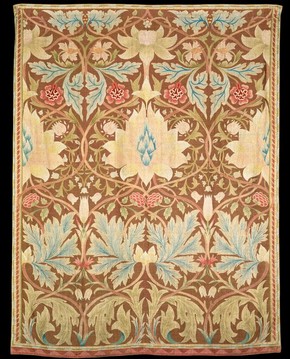 By the middle of the 19th century a revival of church embroidery, influenced mainly by the architects A.W.N.Pugin and G.E.Street, was underway. This in turn had an effect on secular work, but it was the influence of William Morris which brought a real revival of the art. Morris’ first experiments in embroidery design were made about 1860 to provide decorations for his own home, Red House. He discouraged the use of Berlin woolwork embroidery believing it to have been responsible for the loss of traditional skills, and instead advocated the use of a wide range of traditional embroidery stitches for his innovative and original designs.

Largely as a result of Morris' influence, a number of bodies promoting an interest in embroidery were established. One of the first of these was the Royal School of Art Needlework (now the Royal School of Needlework) which not only became a centre for the production and sale of embroidery, but also a training school for students. Design compositions for their 'art needlework' took on many forms with irises, daffodils and cranes reflecting the influence of the fashionable Aesthetic movement (though the Victorian love for Berlin woolwork continued unabated). It became a tradition, started by the Royal School of Needlework that ‘artists’ supplied the schools with designs and that embroiderers were not artists.