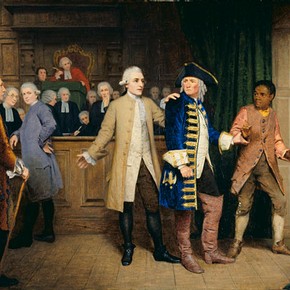 James Hayllar, ‘Granville Sharp, The Abolitionist, Rescuing a Slave from The Hands of His Master’, 1864, oil on canvas. Museum no. 1-1874

Although other European countries were involved in transatlantic trade, including the trade in enslaved African people, it was Britain which dominated this trade during the period from 1730 to 1800. In 1807 Britain finally abolished the slave trade. From having been one of the biggest players in the trade Britain became one of its loudest opponents. Using the power of the Royal Navy it began an active campaign to prevent other nations trading in slaves. This was partly an economic necessity in order to ensure that Britain's colonies remained economically competitive without imported African slave labour.

The biggest opposition to slave trading in Britain came from religious movements, particularly the Religious Society of Friends (Quakers) and evangelical Protestant groups. These groups were led by campaigners such as William Wilberforce who saw the battle against slavery as a spiritual crusade. However, despite their campaigning, the parliamentary abolition of the British slave trade in 1807 passed with little press attention. Then, as Britain attempted to end the slave trading of other nations, public interest in abolitionism grew. Slowly the story of slavery was overwritten in the imagination of the British public with a triumphant narrative which glorified the efforts of some (white) abolitionists and the British government in crushing the trade. 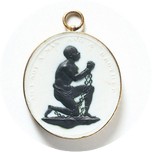 Correspondingly, much of the visual culture relating to the abolition of the British slave trade emphasises the role of white abolitionists such as William Wilberforce and Granville Sharp over that of black campaigners such as Olaudah Equiano and Ottobah Cugoano.

The influence of those religious movements involved in the abolitionist campaign is apparent in its Christian-inspired iconography. An example of this can be seen in a white jasperware medallion produced by Josiah Wedgwood for the Society for Effecting the Abolition of the Slave Trade. The medallion features an enchained kneeling African man looking upwards as if seeking the mercy and intervention of God and his Christian followers. 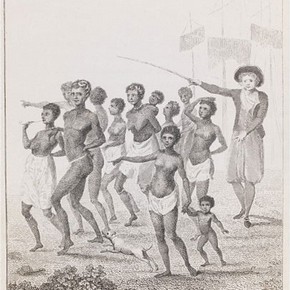 Along with the prints designed by William Blake to accompany Captain J.G. Stedman's Narrative of a Five Years' Expedition Against the Revolted Negroes of Surinam (1796) and the plan of the grossly overcrowded Liverpool slave ship Brookes, Wedgwood's 'slave medallion' became a key element in the visual vocabulary of abolition.

The image was reproduced in numerous anti-slavery publications as well as on stationery, plates, enamel boxes, tea caddies, in books, prints, oil paintings and ceramics. It continued to be reproduced and discussed up until the end of the American Civil War. Like other abolitionist imagery, the success of the medallion relied for its effectiveness on making an emotional appeal. In making this appeal it presented the black African as a passive victim requiring the mercy of white society. 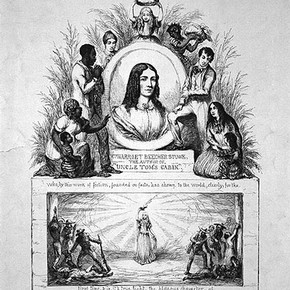 George Cruikshank, Illustration to Uncle Tom’s Cabin, about 1852. Museum no. 9442

This stereotype persisted on the other side of the Atlantic, where it informed representations of black Africans. Harriet Beecher Stowe's novel, Uncle Tom's Cabin, told the story of Uncle Tom, a long-suffering African American slave. The novel was first published in serial form in 1851 and went on to become the best-selling book of the 19th century. It is often credited as a driving force behind America's anti-slavery movement but presents many of the black characters as racial 'types', not least Uncle Tom, who is portrayed as a victim who passively accepts his fate.

The stereotyped imagery that accompanied anti-slavery movements in the late 18th and 19th centuries created a legacy of unequal power relations which endured long after 1807.  However, the period did offer other representations of black Africans who experienced slavery, which more properly reflect the role of black Britons in the struggle for emancipation. A double portrait of Job Ben Solomon and William Ansah Sessarakoo, for example, depicts two high-born African men who escaped slavery and gained prominence and respect amongst London society. 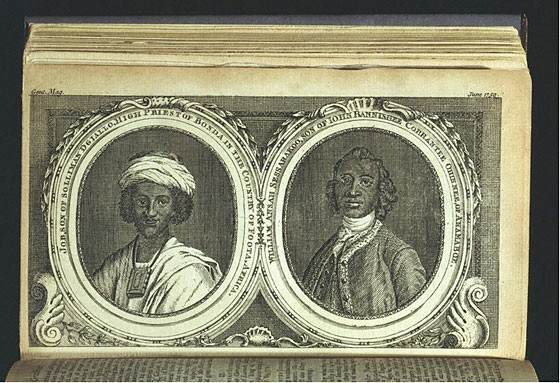