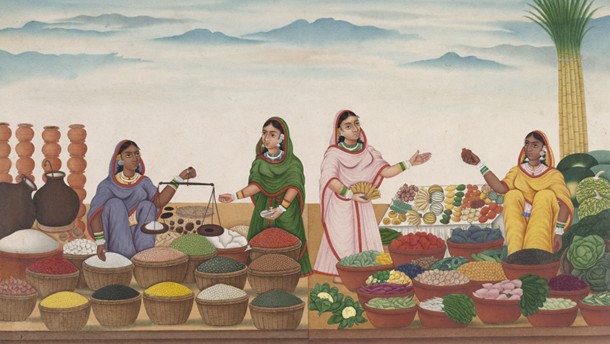 ‘Company painting’ is a broad term for a variety of hybrid styles that developed as a result of European (especially British) influence on Indian artists from the early 18th to the 19th centuries. It evolved as a way of providing paintings that would appeal to European patrons who found the purely indigenous styles not to their taste. As many of these patrons worked for the various East India companies, the painting style came to be associated with the name, although it was in fact also used for paintings produced for local rulers and other Indian patrons.

The subject matter of company paintings made for western patrons was often documentary rather than imaginative, and as a consequence, the Indian artists were required to adopt a more naturalistic approach to painting than had traditionally been usual. Europeans commissioned sets of images depicting festivals and scenes from Indian life or albums illustrating the various castes and occupations, as well as the architecture, plants and animals of the sub-continent. While most of the works were painted on paper, there was also a fashion for images of Mughal monuments and Mughal rulers and their wives painted on small plaques of ivory. This increased use of western approaches to painting coincided with the later phases of local painting styles, as manifested in centres such as Lucknow, Murshidabad and Delhi in North India and Mysore and Thanjavur in the South. As a result, the line between ‘company’ painting and later provincial work for local patrons is often blurred.

The V&A's collection of over 2,000 company paintings were digitised with support from the Bonita Trust.

All the company paintings are available to view in Search the Collections.