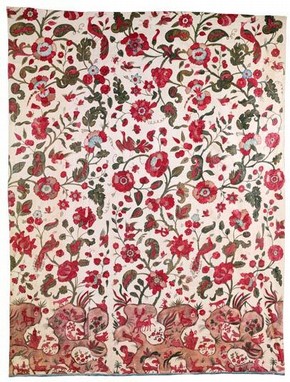 Hanging of painted and dyed cotton made in western India for the British market, late 17th or early 18th century. Museum no. IS.156-1953.

Textiles have a long and distinguished history in the Indian sub-continent. The technique of mordant dyeing, which gives intense colours that do not fade, has been used by Indian textile workers since the second millennium BC. Until at least the 18th century, India was able to produce technically much more advanced textiles than Europe could.

Distinctive features of Indian textiles include the use of madder dye, which gives a vibrant red, and a consistent range of decorative motifs. Madder comes from the roots of a herbaceous climbing plant known as 'chay'. When grown on soil rich in calcium from crushed sea-shells (as occurs near estuaries in certain parts of South India) this plant can be used to produce an intense, glowing red dye. This dye was particularly exploited in the production of chintz, as was violet-blue indigo, a dye obtained from a leguminous plant.

Babur, the first Mughal emperor of India (reigned 1526-30), was a great lover of plants and organised the building of many beautiful gardens in his new territories. His love of flowers was shared by later generations of Mughal emperors, particularly Jahangir (reigned 1605-27) who asked his artist Mansur to paint over 100 spring flowers. The naturistically treated flowers painted by Mansur and other artists for Jahangir became more stylised under Shah Jahan and evolved into a widely used decorative motif.

This particular device spread into general commercial use, undergoing many changes during the late 17th and 18th centuries as a result of European and Chinese influences and was still used in designs on products sent to the European market in the 18th century at the height of the textile trade. Many 18th century chintz palampores, or bed coverings, feature a central flowering tree growing from a rocky mound or arising from water surrounded by sacred lotuses and marine creatures. The tree is flanked by vases, animals or birds and the design includes a series of narrow and broad borders of undulating patterns based on flowers and leaves. The flowering tree's original relationship to the ancient symbol of wish-fulfilment or the tree of life was probably long forgotten by this time, but the motif itself was still desirable.

It is known that Indian textiles were traded in ancient times with China and Indonesia, as well as with the Roman world. The Roman merchant navy was eventually replaced by Arab traders, and they in their turn by the Portuguese, after Vasco da Gama arrived in India at the end of the 15th century. In 1600, Elizabeth I gave the East India Company a monopoly on trade between England and the Far East. The Dutch, French and Danish also formed similar companies. During the 17th century the East India Company shipped relatively small quantities of textile goods to England. For instance, the diarist Samuel Pepys bought a painted Indian calico chintz for his wife 'for to line her new study which is very pretty'.

Originally such decorative goods were incidental to the trading of commodities like spices and silk. Sheets of patterns and designs travelled along the trade routes at the same time. But India was to become the greatest exporter of textiles the world had ever known, with the trade reaching its height in the 18th and 19th centuries. Bullion was sent to India to trade for printed textiles, which were then shipped to Indonesia. A large proportion of the fabric would then be traded for spices, which were sold with the remaining textiles in London for bullion, so the three-way trading trips could start all over again. Lengths of patterned silk, cotton, and cotton and silk mixtures, handkerchiefs, neck-scarves and table napkins were shipped in their thousands to England. A popular way of selling cloth was as 'piece goods', shortish lengths of fabric in standard yardages suitable for, say, a dress or handkerchief. The buyer made up the finished item by cutting, sewing or hemming as necessary. Tie-dyed silk handkerchiefs from Bengal, called 'bandannas', were sold in thousands as neck cloths for sailors, agricultural labourers and other working people.

There are many other Indian words still in English usage which reflect this period of massive trade in textiles. For example, calico, dungarees, gingham, khaki, pyjama, sash, seersucker and shawl. 'Chintz', related to a Sanskrit word meaning coloured or spotted, now means a cotton or linen furnishing fabric of floral pattern stained with fast colours and made anywhere, but it originally referred only to colour-fast, light, cotton fabrics made in India for the English market. Chintz production was a very complex process involving painting, mordanting (fixing a dye), resisting and dyeing depending on the colour being used. Different colours required different processes. The original chintz designs were hand-painted and resist-dyed but block-printed designs were incorporated later. Goods were listed by importers as painted, regardless of whether they were painted or printed. Considerable interaction between trading companies, exporting manufacturers and the buying public developed. Requests for textiles with specific designs and colourways were received by the Indian manufacturers, along with drawings and pattern sheets, thus influencing Indian design. Manufacturers and makers in Europe copied Indian designs liberally, taking over their European markets.

In the 18th and early 19th centuries the East India Company in effect ruled a large part of India. Eventually the British Crown took control of the governing of India, and the Company was abolished in 1858. By this time England was already printing its own 'Indian' textiles with machinery and newly developed synthetic dyes.