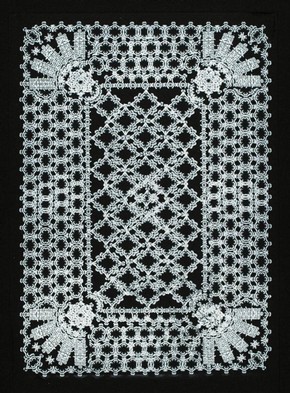 Dawn Cole was the winner of the V&A Prize at the International Print Biennale, Newcastle, in 2011, and this print, Amputations, Etc., 2011, was acquired for the V&A as a result.

This print comes from a series of solar plate etchings in which the imagery is based on lace-work but the ‘stitches’ are letters which spell out phrases taken from the diary of the artist’s great aunt Clarice Spratling. Clarice was a young VAD (Voluntary Aid Detachment) nurse posted to France in 1915, where she served for the duration of the war.

Her diary includes accounts of shocking injuries, and of the distress of men who had been wounded and gassed, all set down in plain and seemingly unemotional prose: ‘Dec 21st 1915: Gas boy died’; Jan 2nd 1916: Men had eyes removed’.

This particular print derives its pattern from the repeated words ‘Amputations, Etc’, a brief brutal summary implying literally unspeakable horrors. The artist has reversed and overlaid the words in such a way as to disguise their sense and origins, but they can still be read entire in some parts of the design. In reference to this necessary close reading, and the truncated phrases pregnant with the unsaid, the series is entitled ‘Reading Between the Lines’, which brings to mind not only the specifics of Clarice’s diary, but also the letters sent home from the front, which were often censored to delete sensitive or demoralising messages, compelling the recipients to guess at the real feelings and experiences behind the apparently bland sentiments. Some families established simple codes between them to evade the attentions of the censor and to exchange forbidden news. Drawing on these roles of letters and diaries, the series as a whole addresses themes of propaganda and deception, memory and recollection, and the ways in which shocking and traumatic events can be accommodated by individuals and society, and subsumed in social rituals.

The words from which the lace imagery is constructed come from Clarice, but so too does the lace motif. A notebook dated 1908, found with the diary and photographs from her time in France, contains patterns for crochet and knitted lace, as well as recipes and remedies. Patterns for knitting and lace-making are of course expressed as a simple code – sequences of letters, numbers and cryptic abbreviations to be translated into garments, trimmings and decorative accessories. Cole too is engaged in a process of translation, piecing together an ordered design from telling words and phrases, disguising their painful implications in the process. Indeed the word ‘lace’ derives from the Latin ‘laqueus’, a noose or snare, and it is this linguistic thread which underpins the subtle ambiguities embodied in these deceptively pretty lace-pattern prints.

The prints in the series represent various articles of lace, including collars, doilies and table-runners. ‘Amputations, Etc’, which is exceptionally elaborate, resembles a tray cloth. Familiar domestic accessories in the Victorian and Edwardian periods, tray cloths were often made of lace, or of embroidered linen with crocheted borders. As a motif for this series, it is especially apt, since bed-bound men, recuperating from their injuries, would have been served their meals on trays; the use of a cloth would have been a gesture towards home comforts in a hospital setting. This is made explicit in Clarice’s photographs of the hospital wards and the army hospital camp, several of which show patients and nurses taking afternoon tea. In one picture, a white table-cloth with cut-work decoration is prominent in the foreground, a reminder of how important these familiar rituals and domestic routines were in boosting morale and generating a sense that normal daily life could continue in the most unpromising circumstances.

Having decided to work with images of lace, Cole not only collected small pieces of lace-work as a guide to styles and structures, but she also visited the V&A to see how lace was displayed; it was this that led her to the decision to print in white ink on black paper to replicate the Museum’s method of mounting lace (which is predominantly worked in white or cream thread) on boards covered with black fabric. This gives the prints a convincing character as precious fragile artefacts, carefully preserved for study. Derived as they are from her great-aunt’s archive, they are also records of memories and experiences handed on from one generation to the next, like family heirlooms.

For Cole the prints themselves become the equivalent of a journal, a record of her close reading of Clarice’s diary, and of the discoveries that have resulted from this process of reading, researching, thinking, drawing, and finally printing. In looking at the prints, in making the connections between their titles and the imagery, and deciphering the words embedded in the pattern, we too become partners in that process of recovering the realities of an event – a world war and its impact on ordinary lives – which is otherwise passing out of living memory.