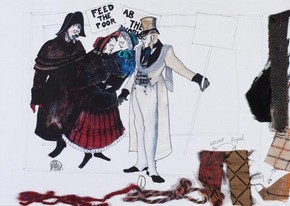 Lez Brotherston is one of the UK’s most dynamic and innovative designers, working extensively in dance, theatre, opera, musicals and film. Best-known for his work with Matthew Bourne and the dance company 'Adventures in Motion Pictures', for which he designed the award-winning ‘Swan Lake’, Lez has also designed films, including ‘A Letter to Brezhnev’, plays, notably at Manchester’s Royal Exchange, and operas throughout Europe. He has also worked extensively with Christopher Gable, director of the Northern Ballet Theatre.

Lez sums up working with Bourne as like being in a pop band: ‘Bourne is the lead singer who tends to get all the attention, but without the other four people in the band, there wouldn't be a song'. His relationships with Bourne and Gable have been exceptionally close - like Diaghilev’s creative teams, where everyone contributed to a work’s development:

In 2005 Matthew Bourne created 'Edward Scissorhands' for New Adventures but there was no intention of copying Tim Burton’s 1990 film starring Johnny Depp. Lez says: ‘There are so many films coming on stage why are we doing it? Are we just capitalizing on the title? Let’s try and make it our own... Our story’s quite different, we decided to say why has he built a boy? OK, he had a son who was struck by lightening when he was playing with scissors and therefore the inventor makes a new son.  So it becomes a bit more Pinocchio.’

While Lez greatly admired designer Colleen Atwood’s work in the original film production, he knew he had to get away from the main characters iconic ‘industrial Goth’ costume to try and find a different Edward: 'If I can get a whole world around him first, then I can put him into it'. So he rejected the film’s 1980s setting, shoulder pads and large hairstyles and moved the period to the 1950s to create 'a kind of American perfect family'.

Lez then went to Phil Reynolds, with whom he has a long working relationship. Reynolds makes Lez’s ideas tangible; his experience is vital, for he knows what can and what cannot be done. ‘Phil’s a very creative maker, I did a drawing and then we sat down and went through what I think Edward’s costume should be. 'I remember saying: “We’ll need to be more anatomical than Colleen. We’re trying to do an Edward who is created from the bits around the inventor’s studio.” So we had an old sofa in there and had all the leather chopped out'.

'Once Phil’s got that he’s got my drawing as a basis but he also looks at anatomical drawings and then says “That shoulder needs to be more like this so that that can work”. ‘I’ll say “I want these muscles to feel they’ve been sewn on with great big bits of garden twine” and he’ll go “OK, leave me with it” and he’ll come up with samples and say “What about this, what about this?” and I’ll say “Have a go at that one” ...when you’ve got someone like Phil, you’re mad not to listen to them. I always defer to the maker. If they go “Hmm. Let me try a different sleeve” you go “OK it’s up to you'.

Lez continues 'Phil’s brilliant at solving weird problems'. In 'Aliens 3', designer Robert Stigwood wanted tents made into convict coats, incorporating details like flaps and studs. He gave Reynolds a drawing and the tents and Phil goes “Well, that could be a collar, I think this could be a cuff”, he loves that kind of challenge'.

'The single most important person is your supervisor (called assistant or associate designer in America). They are given the money - we go through it together and if it goes over budget it’s not my fault! I have the idea and we’ll go shopping but they’ll buy the fabric and have it posted.

'They arrange the fittings and liaise with stage management or dance staff. Whenever we have contact with the makers I’m there, I do the fittings. It just means that the organisation is done by someone much better than I am. I’m still terrible at sizing things or guessing how much fabric we need, whereas a supervisor can go "This is at least 9 metres and there’s only 40 meters so buy it all because we don’t want to come back in a few month’s time saying have you got two more meters?". That’s a really close relationship.' 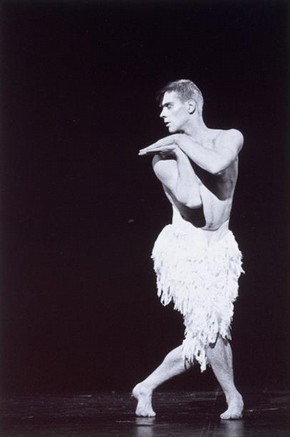 'Period costumes have to move with the body, but dancers like tight-fitting costumes. However, a jacket that fits too snugly will rise with the arms and stay up. The battle is to get the dancers to accept looser fittings that move up and down the body. Occasionally you go “OK, fine, let’s pin it. That’s where you want it. Now lift your arms up. Oh look, it doesn’t come down. That’s why we’re not doing i". You really have to prove it to them.’

So costume fittings can be fraught: ‘it’s that relationship thing again – when you’ve been working with someone like Adam (dancer Adam Cooper) for twelve or thirteen years I know he’s not difficult. If he says “I’ll make it work”, he’ll make it work. If he says “I’m having problems with this", it’s a problem and I can’t ignore it. For me, what they’re bothered about is a judgement on how good they are as performers.  Different dancers have different foibles, different likes. It’s only when you’ve worked with them a lot that you know, there are some people you know are worth doing it for.'

Working to a budget

'Being unpopular is part of a designer’s job. I say to Matt "Now I do the bad guy bit. I’ve done the bit where I design it. I’ve done the bit where I’ll come up with anything you want... and now I’m saying you haven’t got enough money to do this”. Budgeting is horrible - it becomes my fight: "If that’s what you want to do then that’s what it will cost".'

Often it’s just numbers of things; Matt goes “I want them all to wear really, really slim fitting suits". I go “OK, great, we have to make them". I can’t go to Top Shop and buy twenty fitting suits you can dance in. So instead of two hundred quid a suit, we’re into a thousand pounds a suit. A tailor is seven to eight hundred pounds, the fabric two-hundred and fifty - that’s what you end up paying, but it will last longer and won’t fall to bits.’

Buying rather than making costumes can sometimes create its own issues.  For 'The Car Man' in 2000 Lez bought original 1950s dresses but being 50 years old and not made for dancing, they started to rip within three weeks. For the revival, the costume budget wasn’t increased and Lez had to remind the accountants: “Unless you want to find more money now and we’ll make, in three weeks’ time you’re going to have to start making". Funds were provided to buy costumes in order to get the show on, then when the dresses tore, they could be copied and the outlay absorbed into the show’s running costs.

Sometimes, costume hire is the best option, but this too can cause problems. When 'Play Without Words' was performed at the National Theatre: ‘I had to hire, but when we revived it, the accountants went: “You did it for £50,000 last time, so you can do it for £30,000 this time because you’ve got some of the stuff", and you go “We don’t have it, we hired. This is going on a two year tour, no one will hire for two years, so (a costume) is now going to cost fifteen hundred pounds to make” - this always comes as a big surprise to them’ 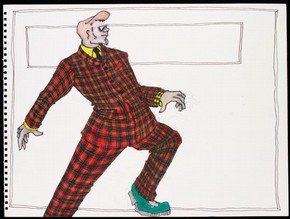 ‘Different projects, films, books, you look at different things. What I look at changes all the time. What kind of production will it be like? It grows from that. Basically it goes back the script, that’s the way I was taught. If you get stuck, read the play again. There’s no point looking at twenty paintings, the play will tell you.’

Trying something new is always difficult. Bourne’s 'Dorian Gray' was intended as an experimental work... 'a four week tour of something we could fail at. With the big shows like 'Scissorhands' you can’t fail, because the financial implication of failing is too big. So you can’t take risks. So the idea was ‘Let’s do 'Dorian Gray' like 'Play Without Words'. We don’t know if it’s going to work, we’ll choreograph on the dancers in the studio, we’ll write the music as we go along, and if it fails, it’s four weeks’ touring.  And suddenly it’s ten weeks’ touring to fund it and suddenly it’s going to the Edinburgh Festival (2008) and Sadler’s Wells and you think "At which point is it experimental? At which point is it different from Scissorhands?"

He rarely redesigns existing works, finding that ‘every dead dancer in the building will have an opinion, what you end up with is nothing like the idea you started with - (a costume)’s got shorter because someone liked it shorter and because someone like it tighter. “Can we get rid of that layer because that was difficult for me?” Someone thought the hair should be up and the eyelashes should be bigger - and you end up with a monster. I wanted a simple shift and I’ve got a drag queen running around. The fewer people involved at the beginning the better, the clearer the artistic integrity of what you end up with on stage’.

View zoomable facsimile of Lez Brotherston's costume design 'bible' for The Brontes (requires Flash)
This content was originally written in association with the exhibition 'Collaborators: UK Design for Performance 2003 - 2007', on display at the V&A South Kensington from 21 November 2007 - 31 August 2008.