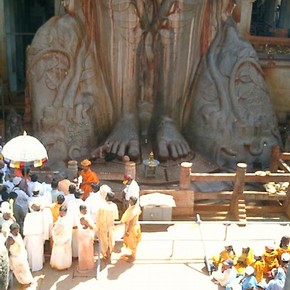 Pilgrims at the feet of Bahubali, photograph, Raju Shah, Karnataka, 2006

Religious festivals play an important part in the Jain community. They provide a focus for communal celebration and an opportunity to show devotion and gain merit. Participation in these festivals is optional, not obligatory.

The principal festivals in the Jain calendar are:

Mahamastakabhisheka festival (held every 12 years)
The Mahamastakabhisheka festival is held every twelve years to honour Lord Bahubali (Gommatesvara), the son of the 1st Tirthankara, Rishabhanatha. This takes place in Sravanabelgola in Karnataka, South India. This 30-day festival was celebrated in February 2006, where the photographs below were taken. The tradition of the head-anointing ceremony (Mahamastakabhisheka) has been performed continuously since 981, when the colossal statue, 58 feet tall, was first carved on top of the Vindyagiri hill. It is lustrated with holy substances from head to foot, much to the delight of pilgrim devotees who assemble there in great numbers.

The story behind this festival involvestwo step-sons, Bahubali and Bharata, who had fought a duel to take over the other's kingdom. Bahubali won the duel, but realised he was about to commit the sin of fratricide and decided to spare Bharata and asked for forgiveness. He fled to the forest, pulled out his hair and stood in meditation in the body abandonment posture (kayotsarga) for such a long time (believed to be twelve months) that creepers wound round him and vines embraced his body while snakes sheltered in the anthills that grew up beside him. Eventually he attained supreme knowledge and liberation (moksha). 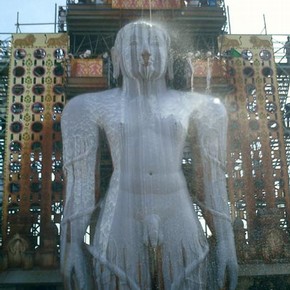 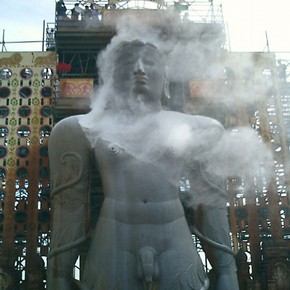 Mahavir Jayanti (annual)
Mahavira's birthday is on the 13th day of the month of Caitra in the Indian calendar, which falls in late March or early April. Mahavira's auspicious birth (kalnayaka) is observed by both Jain sects, the Digambaras ('sky clad' or naked) and Svetambaras ('white clad' or clothed).and in India images of Mahavira are paraded in the streets with much pomp and celebration.

Paryushana (annual)
This is observed around August or September. This is the oldest known Jain festival, celebrated for eight days by the Svetambaras and for ten days as Dasalaksanaparvan by the Digambaras. Paryushana is a time for fasting and the taking of vows, whereby participants impose restrictions and hardships on themselves in order to keep their minds firmly fixed on religion.

People go to temples, worship the Tirthankaras (or Jinas), which are perfected-beings that serve as role models to guide the faithful on the proper path to liberation from the endless cycles of rebirth. Worshipers also hear religious talks based on the Kalpasutra, which gives details of the lives of the Tirthankaras and codes of conduct for the ascetic community. Finally, they perform Pratikraman (ritualised confession).

The final day is known as Samvatsari (Annual) and involves a ceremony of communal repentance and the seeking of pardon from all living creatures. On this day most of the Jains recite the Tassa Michchhami Dukkadam (Forgiveness for my Misdeeds) to each other after the annual Pratikraman. The Digambaras' Paryushana revolves round the recitation of the ten chapters from the Tattvarthasutra and homilies delivered on the ten religious virtues.

Diwali (annual)
This is usually held in mid-October and is called the festival of lights. This is the day when Mahavira attained nirvana or moksha. There is no fasting. Many Jains also make offerings (puja) to Laksmi, the goddess of wealth, in order to promote prosperity. The day after Diwali is the New Year, when Mahavira's chief disciple Gautamaswami attained supreme knowledge and marks the beginning of the new commercial year when merchants open a fresh set of financial books.