Jainism: Jinas and Other Deities 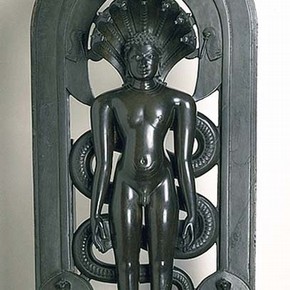 Veneration of the 24 Jinas is the most significant devotional focus in Jainism. These perfected-beings serve as role models to guide the faithful on the proper path to liberation from the endless cycles of rebirth. While all are revered as great teachers, four of the Jinas occupy the most exalted positions and have received particular attention in textual and artistic portrayals. 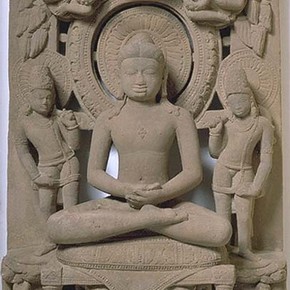 The conceptual basis for the image of a Jina is the pan-Indian ideal of the yogic or ascetic wanderer. Jinas are always shown in the seated posture or the standing body-abandonment pose (kayotsarga). The latter is position uniquely Jain and combines vigorous austerity and non-violence through immobility, thereby avoiding even accidental injury to other creatures. Perhaps because Jain images are often indistinguishable from those of the Buddha, a distinctive chest mark (srivatsa) was introduced to establish a deity's identity as a Jina.

Early in their history, due in part to a conflict over what constitutes total renunciation, Jainism split into two groups: the Svetambaras (meaning 'white clad' or clothed) and the Digambaras ('sky clad' or naked).

The Digambaras are the more austere sect and their monks consider any possessions, including clothing, a hindrance to spiritual liberation.

While the Jinas are the highest venerated members of the Jain pantheon, there are many other deities and subsidiary divinities portrayed in Jain art. These include gods and goddesses, guardian spirits and celestial beings who, it is assumed, came to be worshipped as a result of exchanges of ideas with Hinduism and Buddhism. All India's early religions shared a common ancestry in the nature cults of the ancient Vedic period.

While many of the secondary members of the Jain pantheon are shared with the Hindus and Buddhists, Jain artistic representations generally emphasise only their benign forms, due to the principle of non-violence.

Click on an image below to find out more about Jain deities and how they are represented in Jain art.