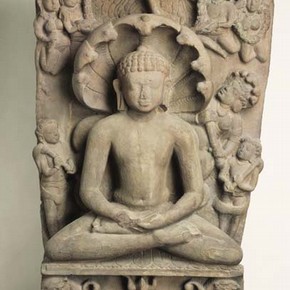 Jainism, one of the three major religions of early India, has been continuously practised since around the middle of the first millennium BC. Its name derives from the word Jina, meaning 'liberator' or 'victor', referring to spiritual rather than material conquest. Jains believe (as do Buddhists and Hindus) in a cycle of birth and rebirth, influenced by the effects of the individual's actions and attitudes (a concept known as 'karma'). The ultimate goal of the believer is to break the cycle and achieve liberation. To help them achieve this goal, Jains revere a group of 24 liberated souls called Jinas or Tirthankaras ('those who ford the river' between the material and spiritual worlds), who act as teachers and role models to the faithful.

The Jain system also includes various gods, goddesses and protective deities who serve the Jinas and are often the focus of independent cults. Unlike the Jinas, these secondary deities are capable of divine intervention, granting boons for the devotee.

The Jains' commitment to non-violence and non-possession limits the types of lay occupations they can pursue. They have traditionally been traders and merchants in textile, jewellery and financial businesses, and today are also prominent in medicine and technical industries. The Jain community's prosperity has long enabled them to be generous patrons. In India today we can see the monuments, stone sculptures, images in bronze and wood and the temple libraries which house the sacred literature. They all bear witness to the fruitful tradition of Jain patronage and artistic achievement. 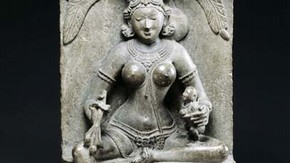 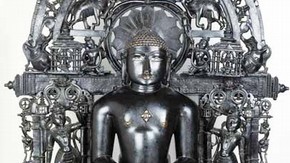 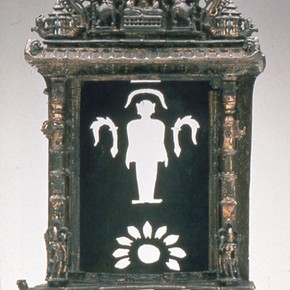 The Jains observe two principal festivals in their religious calendar. The first is Diwali, the festival of lights, which marks the release (moksha) from the cycle of rebirth of Mahavira, the most recent Jina. The lighting of candles is intended to dispel the darkness created by his departure. The second is Paryushan, traditionally held at the beginning of India's rainy season in September, a time when the monsoons restrict travel and activity. It is the festival of forgiveness, when Jains retire to repent, fast and meditate.

Western commentators have not always understood the distinctive identity of Jainism or, indeed, acknowledged its role in the building of India's artistic heritage. Jainism is often defined in terms of comparisons with Buddhism and Hinduism. While these religions share a common heritage, and in some cases share deities and even iconography, Jain teachings represent a different and separate religious tradition. Jain objects and paintings are often adorned with pictographic emblems of the fourteen auspicious dreams of Mahavira's mother, foretelling the spiritual superiority of Mahavira.

Other emblems include the eight auspicious signs, symbolic of various Jain concepts. Representations of the celestial assembly of the Jinas also feature, as do images of the mythical continents which they inhabit.

The emergence of Jainism

In the first half of the first millennium BC, the dominant religious system in northern India was based on the Vedic scriptures. The concept of sacrificial ritual, presided over by brahmin priests, specialist intermediaries between men and gods, was at its centre. Through the officiating priests and complex rites, people used animal sacrifice to win benefits from the gods. In about the sixth century BC, towns began to appear, along with the economic and social changes that accompanied this urbanisation.

Very broadly around the same time, new forms of religious thought and practice were emerging, both within and outside the Vedic system. A new emphasis developed on escaping the cycle of rebirth. Jainism, along with Buddhism, emerged in a milieu in which religious seekers renounced the life of the householder to become wandering mendicants. Both Mahavira and the Buddha belonged to this tradition. They were born into the warrior caste (ksatriya), and lived in eastern India, in an area of the Ganges valley including the modern state of Bihar. The new thinkers questioned the dominant Vedic Brahmanical orthodoxy (in which an entity called brahman was considered supreme) and its stratified caste system with brahmins (priests) at the top. They rejected animal sacrifice. For Jains in particular, a central tenet of their faith was a renunciation of violence in all its forms and a concern for all forms of life.

Page from an Uttaradhyayanasutra showing the Story of the True Sacrifice, Gujarat, Western India, mid-15th century. Museum No. IS.2-1972 (f.27r)