Japanese Art and Design: A Glossary 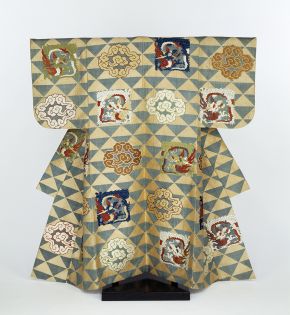 The tea ceremony (literally ‘hot water for tea’); also sadō or chadō (‘the way of tea’)

‘Large and small’, the katana and wakizashi swords worn in combination

Ceramic with the body made from clay fired to between 800 and 1100˚ Celsius; unvitrified and permeable by water 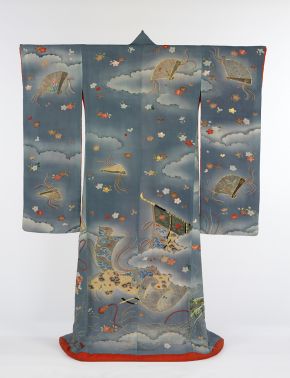 The Tale of Genji, a long prose romance written by the court lady Murasaki Shikibu in the early years of the eleventh century

A type of chalk (or plaster of Paris) ‘wash’ used as an undercoat in, for example, the decoration of a mask 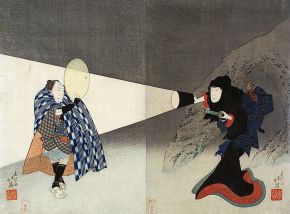 Popular drama that developed in the seventeenth century

A summer kimono usually made of ramie

The longer of the two swords in daishō mounts, generally about 90 cm long 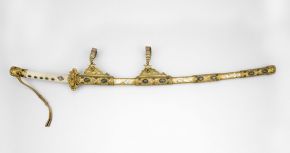 A decorative style of sword (tachi) mounting worn at court

This literally means ‘the thing worn’, from the late sixteenth century this was the principal garment for both sexes and all classes

A skewer that fits into the scabbard of a sword

Small knife that fits into the scabbard of a sword 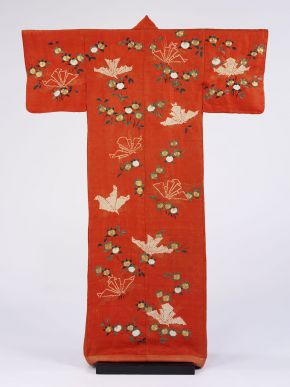 'Small sleeve’, the precursor of the kimono

The handle of the kogatana

Small metal ornaments fitted under the wrapping of the sword-hilt

A family crest or badge, often used as a decorative motif

'Piled-up’, the technique of applying enamels in layers so that they are in relief to the body of the vessel 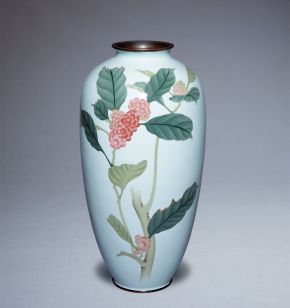 ‘Without wires’, the enamelling technique where the wires are either completely hidden or are removed before the firing, to create a softly outlined decoration

‘Southern Barbarian’, the term used by the Japanese to describe European visitors during the sixteenth and seventeenth centuries, and applied to artefacts produced for Europeans or under European influence

A decorative toggle worn with inrō

One of the standard sizes of woodblock print; about 33 x 27 cm in either vertical or horizontal format

A sash worn around the waist to secure the kimono 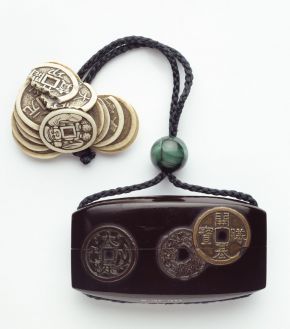 Ceramic decoration, usually painted, which is applied over the glaze after the high-temperature firing

A firing technique in which sufficient air is allowed into the kiln for complete combustion of the fuel. Cchemically reactive parts of the ceramic material emerge from the firing in an oxidized state

A technique to induce a change in the surface of an object, typically of metal

Ceramic with the body made from china stone (crushed volcanic rock in Arita) containing kaolin (a pure form of clay) and fired to between 1250 and 1350˚ Celsius; translucent, white, vitrified and impermeable by water

A firing technique in which the flow of air into the kiln is restricted; the burning fuel draws chemically bonded
oxygen from the reactive parts of the ceramic material, leaving them in a reduced state 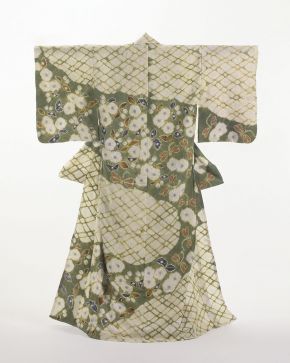 An alloy of copper decorated with black lacquer and gilt

An alloy of copper with a small percentage of gold, which is patinated to a blue-black colour

A resist-dyeing method by which sections of cloth are bound, stitched, folded or clamped to avoid penetration of the colour when the fabric is immersed in the dye vat

An alloy of copper (approx. 75%) and silver (approx. 25%), which can be patinated to a wide range of colours

The indigenous belief system of Japan, based on the veneration of natural phenomena

Military ruler of Japan from 1185 to 1868, in theory exercising his power with the consent of the emperor

Literally ‘few’ or ‘limited’ wires, the enamelling technique whereby the number of wires was kept to a minimum and used only to delineate details of a design

Ceramic with the body made from clay and fired to between 1200 and 1300˚ Celsius; vitrified and impermeable by water 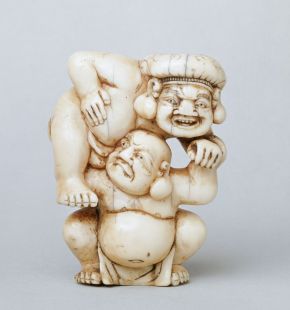 ‘Inkstone box’, a box containing an inkstone for grinding solid ink with water, a water-dropper, brushes
and other writing utensils

A sword worn cutting-edge down in the scabbard

‘Short sword’, but a term generally applied to daggers

‘Polished-out picture’, a form of lacquer decoration in which a maki-e design is covered over with several layers of lacquer of the same colour as the background. These layers are then polished down until the original design reappears, flush with the new background

An alcove forming the focal point of tea rooms and other formal rooms and used for the display of scrolls, flowers, etc. 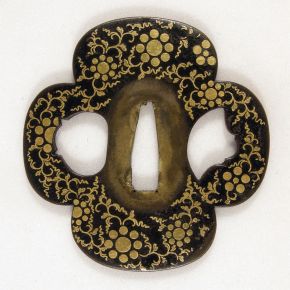 An outer kimono with a padded hem, worn without an obi

A ceramic decoration, usually painted, which is applied to the body of a pot before it is glazed and fired

The shorter of the two swords in daishō mounts, generally about 60 cm long

‘With wires’, the standard technique of creating cloisonné designs enclosed within wires

A resist-dyeing technique that involves drawing on cloth with paste extruded from a cloth bag and which forms a protective barrier when dyes are brushed on. This is named after the artist Miyazaki Yūzen (1654?–1736), who is credited with its invention 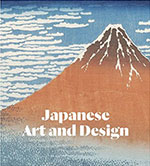 This glossary is an extract from the book Japanese Art and Design: The Collections of the Victoria and Albert Museum edited by Gregory Irvine, published to accompany the reopening of the V&A's refurbished Toshiba Gallery of Art and Design in November 2015.