Josephine Baker, international star of sensational, exotic cabarets including La Revue Nègre, and the infamous Folies Bergère in Paris and Berlin, was born on 3 June 1906 in St Louis, Missouri. During their short-lived marriage her parents had a song and dance act; her mother being known for ability to 'do the cakewalk', dancing along a chalk-line with a glass of water balanced on her head and never spilling a drop. Josephine's father, Eddie Carson, was a drummer who played in bands in saloons, vaudeville houses and brothels.

Josephine Baker was only one year old when her parents introduced her into the finale of their stage act. By the age of 14, with a huge repertoire of steps, she began her career in the chorus line of the Booker T. Washington Theatre, St. Louis. By 1925, aged 19, Josephine Baker was shimmying and dancing the Charleston in La Revue Nègre, in Paris, bowing her legs and crossing her eyes at the same time as 'scatting' to the music.

Throughout her life, Josephine Baker adored and was constantly surrounded by menageries of animals. She had learned early in her poor childhood to be mistrustful of people, and began her lifelong habit of showering affection on animals by befriending and sharing her food with Three Legs, the crippled dog of her unkind employer. Her dancing was described by reviewers in animal terms; she was a kangaroo, a panther, a monkey, a tropical bird. In fact, she claimed she learned to dance by watching the kangaroos in St. Louis Zoo. This might have been true as many of the black dances of the day were based on imitating animal movement, such as the turkey trot, the kangaroo dip, the bunny hug and the rooster strut.

In sharp contrast to the hardships of her early life, by 1925 Josephine Baker had her own nightclub, Chez Josephine, in Paris. Here she shared her dressing room with a goat called Toutoute. In the club kitchen lived her pig, Albert, whom Josephine doused with the Worth perfume Je Reviens. Albert thrived on the kitchen scraps and there was a time when the kitchen doorway had to be broken down to get him out. 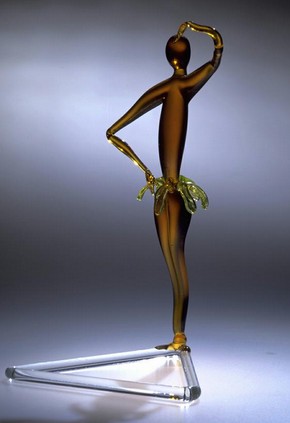 Most famously, Josephine Baker was joined in her act at the Casino de Paris by a cheetah, Chiquita, a gift from Henri Varna, the club's owner. Varna's idea was that the cheetah would complement perfectly Josephine's image; half exotic, untamed creature; half elegant beauty and sophistication. Josephine adored Chiquita, buying him a diamond choker and taking him everywhere with her. Pepito, Josephine's lover and manager, did not go along with her delight in Chiquita, who shared their bed, car and holidays.

Diana Vreeland, famous editor of Harper's Bazaar and Vogue in the 1930's, has a wonderful anecdote about Josephine and Chiquita. One very hot July, Diana Vreeland had gone to a Montmartre film theatre to see a film, L'Atlantique, about lost Foreign Legion soldiers in a desert oasis. The delirious soldiers dreamed of the beautiful Queen of the Lost Continent who was surrounded by a fountain of champagne with basking cheetahs. When the lights went up in the theatre, Diana Vreeland was shocked and delighted to find she was sitting next to Chiquita. Josephine had brought the beautiful animal for an outing to see the cheetahs in the film. Outside the hot theatre, an enormous white and silver Rolls Royce was waiting for Josephine Baker and Chiquita. Diana Vreeland describes how the driver opened the car door, Josephine let go of the cheetah's lead, Chiquita whooped and took one elongated leap into the back of the Rolls Royce, with Josephine Baker in her couture Vionnet dress leaping in behind. And then they were off with such speed and style; together the very zeitgeist of the Deco years.