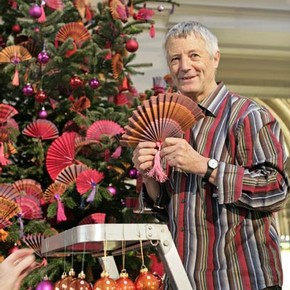 Kaffe Fassett was born in San Francisco in 1937. At the age of 19, he won a scholarship to the Museum of Fine Arts School in Boston, but left after 3 months to paint in London. He settled in England in 1964.

Kaffe ventured into the world of colourful yarn on a visit to a Scottish wool mill. Inspired by the colours in the landscape, he was thrilled to find the same colours in yarns. He bought 20 colours of Shetland wool and some knitting needles, and on the train back to London a fellow passenger taught him how to knit. His first design appeared as a full page spread in Vogue Knitting magazine.

In 1985 on the TV programme 'Pebble Mill at One', Kaffe inspired 2,600 viewers to needlepoint an image of their favourite thing to form part of the Pebble Mill at One Heritage Tapestry. Since then, Kaffe has encouraged thousands of traditional one-colour knitters and needlepointers to employ rich palettes of colour through his television appearances, radio shows, exhibitions and commercially available patterns.

Kaffe's exhibitions have taken his work around the world. In 1988 the Victoria & Albert Museum hosted a retrospective exhibition of his textiles work. Kaffe even designed a gold medal winning garden for the 1998 Chelsea Flower Show.

Kaffe has produced a number of publications including, Mosaics (Ebury Press UK), and Welcome Home Kaffe Fassett. In 1999, a concession of Kaffe Fassett products and 'One of a kind' designs launched at the Liberty Department Store, London.