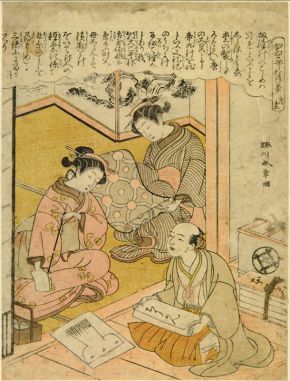 Kimono are made from single bolts of cloth, about 36cm wide and 11 metres long, which are cut into seven straight pieces. Two panels - each extending up the front, over the shoulder and down the back - create the body, two the sleeves, two more the overlaps, and a narrower panel the neckband.

This simplicity of construction meant that kimono could be sewn in the home. In the Edo period many households, particularly in rural areas, also had their own loom, and a woman's sewing and weaving abilities were considered very important. The creation of sumptuous silk kimono, however, required the skills of specialist artisans, the majority of whom were men. Fashion was big business and supported an extensive network that included spinners, weavers, dyers, embroiderers, specialist thread suppliers, stencil makers and designers. At the heart of the industry were the drapery stores, the most famous of which was the Echigo-ya in Edo founded in 1673 by Mitsui Takatoshi. Merchants such as Mitsui not only sold kimono fabric, but orchestrated the activities of the various specialist workshops involved in the creation of individually commissioned garments.

When choosing a kimono design, customers, and also the makers and sellers of kimono, could turn to pattern books (hinagata-bon) for assistance. These contained illustrations of the back of kimono with accompanying notes on colour and decoration. Books showing kimono being worn were also published, not so much to provide practical help but for the pleasure of thumbing through them, rather like today's fashion magazines.

The western textile technology introduced to Japan in the Meiji period speeded up production and lowered costs. At the turn of the 20th century many drapery stores transformed themselves into modern departments stores. Echigo-ya, for example, became Mitsukoshi, which remains one of Japan's leading retailers. Since the Second World War the wearing of traditional garments has dramatically declined, but today such stores still have kimono departments. Nowadays most production is automated, but some makers continue to utilise traditional skills in the creation of contemporary kimono. 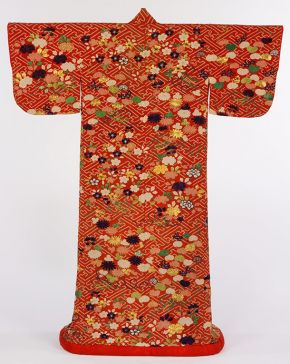 Most of the dyes used to colour Japanese textiles, and many of the techniques used to apply them, have a history that dates back to the 8th century. However, it was not until the Edo period that the sophisticated dyed designs for which Japan is famous fully developed. Dyeing is a very specialised skill and the top dye houses carefully guarded their secrets. Kyoto was the dye centre of Japan, but no village was without its own dye house.

In Japan a variety of resist-dyeing methods are used. Shibori, or tie-dyeing, involves the binding, stitching, folding or clamping of the cloth prior to immersion in the dye, the colour thus not penetrating the protected areas. In one of the most distinctive Japanese techniques, kanoko shibori, closely placed small circles in diagonal rows are bound tightly with thread before dyeing. In stencil dyeing, or katazome, rice paste is applied through a stencil onto the cloth. The stencil is then removed and placed on the next section of fabric and the process repeated. When the cloth is dyed the colour does not penetrate the areas covered with the paste, which is then washed away once the dye is dry.

Rice paste is also utilised in yūzen, in which a cloth tube fitted with a metal tip is used to apply a thin ribbon of paste to the outline of a drawing on the fabric. Dyes are then brushed within the paste boundaries. This technique, named after Miyazaki Yūzen, the artist monk credited with inventing it, developed in the 18th century. It allowed for extremely detailed patterning and gave kimono designers almost unlimited freedom of expression.

In the second half of the 19th century the dyer's palette was expanded by the introduction of chemical dyes and in the late 1870s a method was devised of directly applying pre-coloured paste through stencils. In the 20th century traditional methods of dyeing survived alongside increasingly automated methods and today are preserved by a number of leading kimono makers who use them to create highly contemporary designs. 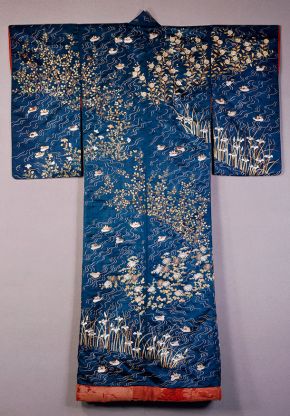 Like other patterning methods, Japanese embroidery has a long history and reached its peak of technical sophistication in the Edo period. Exploiting the freedom the technique allows, and utilising a myriad of colours and an extensive range of stitches, embroiderers have produced some of the most striking of all Japanese textiles. Embroidery was often used in conjunction with dyeing, the combination of techniques giving designs a variety of texture and visual depth. When embroidery was the sole decorative method, a satin fabric was commonly used, giving an extremely lustrous effect.

Japanese embroiderers employ a number of different stitches. A flat stitch (hira-nui), equivalent to satin stitch in the West, is used to create pattern elements such as flowers and leaves. These stitches use floss (untwisted) silk, which gives the embroidery a very rich sheen. A tiny gap, equivalent to the point of the needle, is used to delineate elements such as the separate petals of flowers or the central veins of leaves. Larger areas are defined with long and short stitches (sashi-nui), also in floss silk. Twisted threads, generally in pairs, are also used. In katayori, one thread is highly twisted and then twisted, more lightly and in the opposite direction, with another thread, giving a nubbled appearance. Another type of texture is created with a knot stitch (sagura-nui). Metallic thread is also used to dazzling effect in Japanese embroidery. This is made from a silk core wrapped in paper and then with gold or silver leaf. The resulting thread is too thick to pass through fine silk without damaging it, so is couched (attached with small stitches) on to the fabric.

In Japan a number of other decorative techniques involve the use of a needle and thread. In Tsugaru, the northernmost part of Japan's main island Honshū, kimono are embellished using a method called kogin, in which white stitches are embroidered over and under an odd number of warps on the woven ground fabric to create a diamond pattern. 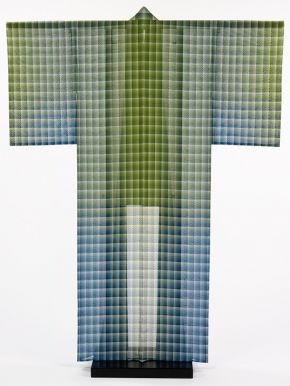 The simplest way of weaving fabric is to pass the weft (horizontal) thread over and under each successive warp (vertical) thread. This is known as plain weave (hira-ori) and in Japan is the principal method used in the creation of cotton, hemp, ramie and certain kinds of silk fabrics.

Stripes and checks are produced by using different coloured threads, while more elaborate patterns can be created by weaving with selectively pre-dyed threads, as in the technique known as kasuri. Silk crepe (chirimen) is also a plain weave, but has a crimped appearnance that is produced by over-twisting the weft threads.

In float weaves the surface of the fabric can show either predominantly warps or predominantly wefts depending on the weaving sequence. By using different combinations of floats, patterns can be created in the cloth as in rinzu, a monochrome figured satin similar to damask. Like chirimen, rinzu was introduced to Japan from China in the 16th century.