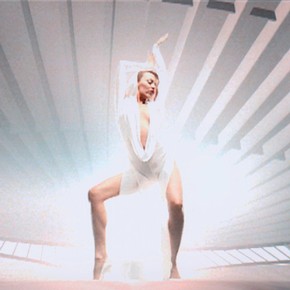 Kylie Minogue in the 'Can't Get You Out Of My Head' video, 2001. Photograph courtesy Parlaphone Records and EMI Records Ltd. 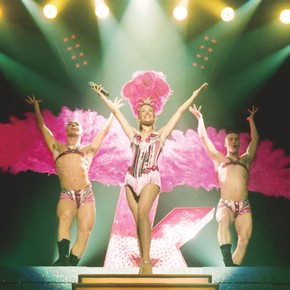 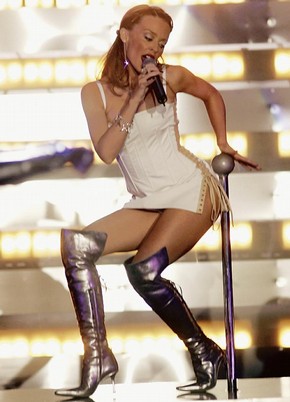 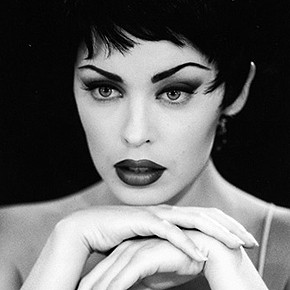 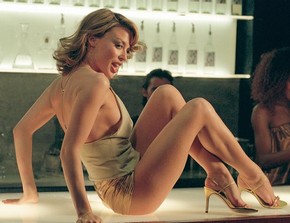 Kylie Minogue in the 'Spinning Around' video, 2000. Photograph by Paulo Sutch

When Kylie’s first single ‘Locomotion’ was released in 1987 it became a number one hit in Australia. It took Kylie to London where she began to transform her image from the girl next door to the stylish, sexy Kylie first seen in the video for ‘Better the Devil You Know’ (1990).

In 1993 Kylie signed to independent UK recording label deConstruction. She began to focus on writing, producing and performing with other artists, achieving new credibility. Videos such as ‘Confide in Me’ (1994) were more experimental and cutting-edge.

When disco-inspired ‘Spinning Around’ (2000) was released, Kylie entered a new phase in her career. From the sophisticated glamour of ‘On a Night Like This’ (2000) to the funky electronica of ‘Can’t Get You Out of My Head’ (2001), Kylie yet again transformed herself both musically and visually. ‘Slow’ (2003) presented another version of sexy, glamorous Kylie.

Kylie has always enjoyed touring and performing live in front of large  audiences. Her costumes are working outfits and by the end of the tour reflect the wear and tear caused by costume changes, microphone packs and make-up. That so many of her costumes have survived the rigours of international touring is remarkable.

Kylie’s early tours featured the costumes of prominent Australian designers, each one revealing a different look. Later she took a more integrated approach to create distinct moods and themes. In the Kylie Fever 2002 tour Kylie wore costumes specifically designed for her by Dolce & Gabbana. The concert took the audience on a journey across time through six acts and featured eight costume changes.

Kylie has appeared at a wide range of charity occasions, special events and award ceremonies including the 2001 MTV Video Music Awards and the 2002 BRIT Awards. While many of her appearances are tied to tours, music releases and videos, Kylie will often appear in stand-alone outfits created especially for the particular occasion. One of her most high-profile appearances was at the 2000 Sydney Olympic Games Closing Ceremony. She arrived in the stadium on the back of a giant ‘flip-flop’ in a pink sequined showgirl costume. Kylie has also made many appearances at gay nightclubs, such as G-A-Y at the London Astoria, and at the Sydney Gay and Lesbian Mardi Gras.

Kylie is one of the most photographed people in the world. Over 25 photographers are represented in this exhibition, allowing us to see the evolution and experimentation that characterise images of Kylie. The photographs are all formal – that is, staged for a purpose – whether that be a video shoot, album cover or magazine feature.

When Kylie began taking greater control of her image through her costumes she also began to use photography in new ways and to work with some of the world's leading photographers. Throughout her career, images of Kylie have also appeared in international fashion and music magazines including i-D, The Face, Pop, Vogue and GQ.

Kylie's image as projected through photography provides another way to explore her as a modern-day performer and celebrity.

Kylie is a cultural icon known the world over, dating from her first appearance as tomboy mechanic Charlene in 'Neighbours'.

The 50p gold hotpants in the video for ‘Spinning Around’, a song that became a musical and visual anthem, and her memorable performance in the video ‘Can’t Get You Out of My Head’, wearing a deceptively simple white jersey hooded jumpsuit have helped to build this iconic status.

This is where the creative ideas and staging behind some of Kylie’s videos, tours and special events take place. Her performances on screen and stage are the result of months of creative brainstorming, writing, design, rehearsals and production. She works closely with a core team, including her stylist William Baker and her musical director Steve Anderson. Depending on the project, there may also be video directors, designers and choreographers who work to develop and realise all creative elements.

It’s easy for the audience to forget that much of Kylie’s world revolves around the spaces backstage. Before a show there will be a flurry of activity as she puts on her first costume and gets ready to make her appearance. After stepping around equipment and over leads, her microphone is switched on and she emerges for another performance.

This text was written to accompany Kylie - The Exhibition, on display at the V&A South Kensington between 8 February and 10 June 2007. The exhibition featured costumes and memorabilia collected over Kylie's career and was inspired by her donation to the Arts Centre's Performing Arts Collection in Melbourne, Australia in 2003.