King Vulture by Meissen, about 1731 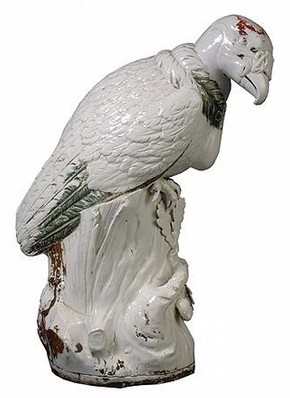 The Meissen vulture was made for Augustus the Strong (1694/7-1733), Elector of Saxony and King of Poland, one of the wealthiest monarchs and most important patrons of the arts of his age. It is from a large group of animals and birds ordered from the Meissen factory for the porcelain menagerie that Augustus planned for the upper floor of the Japanese Palace at Dresden.

Conceived in 1730, the vulture was intended to complement his existing menagerie of live animals at the Moritzburg and his collection of stuffed animals at the Zwinger (both nearby in Dresden). The three collections were intended to demonstrate the Elector's culture and taste (porcelain sculptures), his power (live animals), and his scientific knowledge (taxidermic collections). The sculpture may have been based on a print or specimen in one of these collections, as the king vulture, 'Sarcoramphus papa' is not found in Europe, but confined to South and Central America.

The ambition of Augustus's project cannot be overemphasised, and it still remains unparalleled in the history of ceramics. The order for these large beasts came only 20 years after the foundation of the Meissen factory, the first European factory to succeed in the manufacture of 'true' (or hard-paste) porcelain of the Chinese type. Meissen's discovery of the means of making porcelain was the direct result of Augustus the Strong's passion for imported Far Eastern wares, which led him to amass a collection of over 20,000 pieces (among them 151 Chinese vases exchanged for a unit of 600 cavalrymen), and to employ, and briefly imprison, the alchemist J. F. Böttger to discover the formula for this 'white gold'.

In 1730, when the project was conceived, Meissen had made few large wares and had very little experience of sculptural production. Indeed, at this date no porcelain sculptures on the scale of the largest Japanese Palace animals had been attempted anywhere in the world.

The size of the project is also extraordinary. According to a list of 1734 as many as 597 animals and birds were projected for the palace. Most were to have been produced in editions of eight from moulds made from original models provided by the sculptors discussed below. While in the event this quantity of figures was not realised, an inventory lists as many as 458 examples at Dresden in 1736, but many were much smaller birds and animals than this piece. Not surprisingly, their production became such a drain on the factory’s output and resources that work on the scheme was abandoned sometime before 1739.

The factory's arcanists – the men who prepared the porcelain formula and glaze – had to develop new porcelain body (or 'paste') for the production of these large animals, one that could bear the weight of the sculptures during the second, high temperature glaze firing, when the material softened in the kiln.

The factory experimented considerably with the formula for the animals (which accounts for the variations in surface finish and colour), and the incised numbers on some examples indicate the variant used. Despite these efforts, most of the animals exhibit fire-cracks (particularly at the base, where the greatest stresses occurred during the firing).

All the Japanese Palace animals were formed in sections in hollow plaster piece moulds. Interestingly, for the production of the king vultures these moulded components were used in a number of different configurations (far more than on other animals), resulting in three variants: one bolt upright (above right), another crouching (the V&A's version shown at the top of the page), and a third leaning forward but with lower legs extended (shown right). The V&A’s vulture is the only example of the crouching pose.

The 'X' mark incised on the base of the V&A's sculpture is attributed to Andreas Shiefer, the factory craftsman who worked the clay in the piece-moulds and assembled the component parts prior to firing.

The factory modeller Johann Gottlieb Kirchner had been put to work on the Japanese Palace project in 1730, and in the following year Johann Joachim Kaendler was taken on as Kirchner's assistant, specifically to provide models for the life-size animals. Kaendler – one of the most important figures in 18th-century ceramics, and arguably the greatest porcelain modeller of his era – later modelled many of the finest Meissen figures and wares, in doing so establishing the conventions that defined the porcelain figure as a sculptural genre. The majority of the models for the Japanese Palace animals were by Kaendler, as Kirchner was dismissed from Meissen in 1733. Some of Kaendler's earliest models for the commission were based on prints, but he made increasing use of the live animals in Augustus the Strong's collection – with the result that many of these later models are extraordinarily vigorous and naturalistic in modelling and conception, as with this vulture.

The model for this bird was created in 1731, soon after Kaendler was appointed, and although payments to him are recorded for modelling these 'Kropff Vogel' (literally 'crop bird'), it is possible that they were made in collaboration with Kirchner, as they show elements of the latter's style.

Augustus the Strong had specified that all the animals were to be in natural colours, but it was thought too risky to put the large models through the kilns for an enamel firing, so these larger sculptures were painted in unfired pigments by the court lacquerer, Christian Reinow. We know from Reinow's invoices that bright colours were used, but these have very rarely survived, as the pigments have discoloured over time, and on the majority of examples they have been completely removed. The survival of the bright green and red on this vulture is exceptional. The colours are mostly on the head, neck and wings, leaving large areas of white exposed. It is probable that much of the bird was left unpainted, as the colouring follows that of real king vultures, and as some of the later Japanese Palace birds with fired decoration have large areas of plumage left undecorated.

The vulture was formerly at Longleat, Wiltshire, where it had been since the 1850s, when, together with nine other animals, it was presented to the 4th Marquess of Bath.

The acquisition of this piece (Museum no. C.11-2003) was only possible through the generous support of the Heritage Lottery Fund, The Art Fund and V&A Membership.