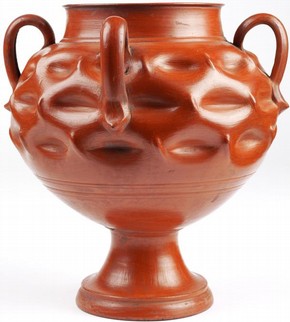 The V&A is renowned for its collections of Italian maiolica, British and Continental pottery and porcelain and Far and Middle Eastern ceramics.  Perhaps the most curious and engaging objects from the collections are a group of polished, clay vessels known as búcaros, which were made in the region around Tonalá in the Mexican state of Jalisco.

Highly-polished earthenware vessels from Tonalá were not only admired by the colonial settlers but exported to Europe in quantities from the early 17th century. The fashion for búcaros de Indias (aromatic earthenware from Latin America) is well recorded in accounts and Spanish still-life paintings of the period.

The vessels were celebrated for their fine and fragrant clay body, which infused a delicate flavour to the water contained within them. Fashionable Spanish ladies were known to eat small fragments of the búcaros to benefit from certain gastronomic qualities. The aroma could be enhanced by storing the absorbent clay vessels in boxes scented with spices and oils.

Large, dimpled vessels were used to store water.
The increased surface area aided evaporation through the thin walls of the unglazed clay. This served to humidify the hot and dry Spanish air. The process also cooled the remaining liquid and released the celebrated aroma of the clay.

Smaller beakers are often characterised by punched, stamped and incised decoration. These delicate vessels appear in many 17th century Spanish still-life paintings, demonstrating that búcaros were as prized as oriental porcelain or fine glass. Contemporary sources record their use in flavouring water at banquets. They were also thought to purify polluted water and even detect poisoned liquids. 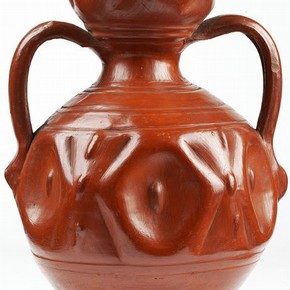