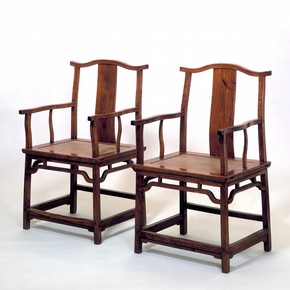 Traditional-style Chinese houses consisted of a number of single-storey rooms arranged around a courtyard. The homes of well-off families would have been made up of several courtyards. There were separate areas for men, women and servants. In all but the humblest of homes, essential furniture would consist of a table, chairs and chests for storage. These pieces were often placed against the walls. Chairs were made of wood and not upholstered although sometimes cushions would be used for comfort.

"When the men of old made tables and couches, although the length and width were not standardized, they were invariably antique, elegant and delightful when placed in a studio or room. There was no way in which they were not convenient, whether for sitting up, lying down or reclining. In moments of pleasant relaxation they would spread out classic or historical texts, examine works of calligraphy or painting, display ancient bronze vessels, dine or take a nap, as the furniture was suitable for all these things. The men of today make them in a manner which merely prefers carved and painted decoration to delight the vulgar eye, while the antique pieces are cast aside, causing one to sigh in deep regret."

The traditional bed is still used in northern China, particularly in rural areas. This is a brick platform (kang) under which a fire is lit, making a warm and cosy place for the whole family to sleep. During the day bedding is folded up and people sit cross-legged on the kang.Chinese rooms had a lot of textiles draped over pieces of furniture. These provided comfort and added colour and pattern, and a bed such as this would have had curtains, pelmets and covered quilts.

"Bed curtains for the winter months should be of pongee [heavyweight] silk or of thick cotton with purple patterns. Curtains of paper or of plain-weave, spun-silk are both vulgar, while gold brocaded silk curtains and those of bo silk are for the women's quarters. Summer curtains can be of banana fibre, only these are not easy to obtain. Curtains of blue fine gauze from Suzhou, or curtains of patterned towelling are also acceptable." 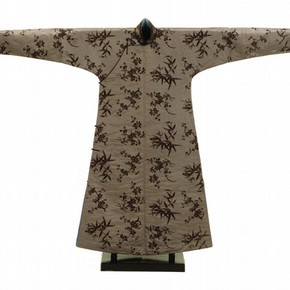 Clothes and grooming were always a matter of great importance to the Chinese élite, as the image presented to the outside world was an indication of standing. The tomb figures of the Tang dynasty (618-906) in the Burial section are shown wearing dress that is quite different in style from most garments that have survived, clearly fashions and tastes changed.

By the Qing dynasty (1644 - 1911) male and female garments were similar in cut although women favoured highly decorated clothes with applied borders, while men normally wore plainer robes. Men’s robes came to just above the ankle and women’s clothes were a little longer, but did not trail on the ground. The simple cut of Chinese clothes meant they could be folded and laid flat in chests or on cupboard shelves, rather than hung from hooks or rails.

Only well-to-do Chinese were able to afford the luxury of cleanliness. A washstand would have stood in a private room and a servant would have filled the brass washing bowl by hand, and hung towels over the tall back. 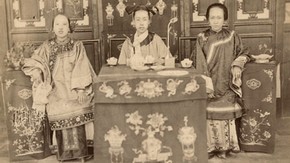 Servants were also responsible for styling the hair of both men and women. Hairpins would have been used by men;  more elaborate ones are more likely to have been for women’s use. Prior to the Qing dynasty (1644-1911), when pigtails became mandatory, men’s hair was twisted or braided in upswept stiles and needed pomade and pins to keep it in place. Maids would also put on the make-up of the women they served. The white foundation and rouge with which the faces of Chinese women were adorned were stored in small decorated boxes made of valued materials. Round metal mirrors were used to check the result. The mirrors had highly decorated backs. 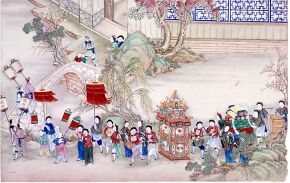 The Chinese clothes on display at the V&A would have been worn by the rich, but even families with quite modest incomes possessed silk garments for special occasions. Precious textiles are used at weddings the world over, and China is no exception. The bride and groom wore silk clothes like those in the weddings display case. They would be made specially for the occasion or hired.

The red silk curtain for a bridal sedan chair formed part of a set of hangings which would have entirely hidden the bride from onlookers and also restricted her own view as she travelled to her wedding. In addition, she might have worn a thick silk veil, or strings of pearls suspended from a headdress, over her face. 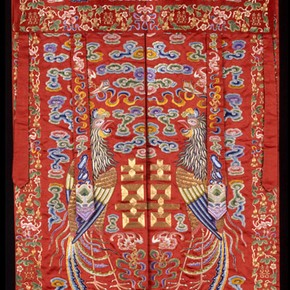 The sedan chair curtain is embroidered with motifs that express hopes for the newlyweds' future happiness. The mythical phoenix bird with a long plumed tail was the symbol of the empresses, implying that the bride is raised to the status of an empress for her wedding day. The paired birds face towards the Chinese character meaning 'double happiness', and this same character is repeated around the border. Legend says that the bulbous fruits, embroidered in gold on this curtain, contain a cloud capable of trapping evil demons. Also in the border are flying bats, which are a pun on the word for happiness. Peaches, which are a symbol for long life, swing from ribbons in the bats' mouths.

For a woman in traditional China marriage was a time of anxiety and sadness, when her life changed considerably. At her wedding the bride would leave her childhood home to live with the family of her new husband, whom she had probably never met. She would rarely see her own family and she might be subjected to the inspection and unkind comments of the groom's relatives.

The young wife's first duty was to give birth to a son as soon as possible; daughters counted for nothing. Only when she produced a male heir would she be fully accepted into her husband's household, since only a son would be able to support family after the husband's death and make offerings and prayers to ancestors. If the wife did not produce a son, sometimes a male child would be adopted. Much of the decoration on wedding textiles reinforces reinforces the importance of sons. Boys at play are a common theme.

"Negotiating the marriage
Men from sixteen to thirty and women from fourteen to twenty are permitted to marry…The first requirement is to have an intermediary go back and forth between the families to carry out the negotiations. Once the girl's family has agreed to the wedding, the betrothal gift may be presented.

On Arranging a Marriage, written by Chu His, about 1170, From Chu His's Family rituals, translated by Patricia Buckley Ebrey, Princeton University Press, 1991.

Women were excluded from many areas of Chinese life; even a skill like writing was largely a male preoccupation. Writing of an everyday clerical nature as well as more artistic calligraphy was done in the study.

Gentlemen in China chose their writing implements with great care and paid much attention to the way they were arranged on their desks. The brushes used to write characters are held vertically, so a supple wrist, together with a sure touch and a steady hand, are needed to produce strokes that do not waver.

Chinese ink comes in the form of a solid cake or stick, which is made into a liquid as needed by rubbing on a slightly hollowed-out stone containing a little water.

Other things found on writing tables are wrist rests to give support when the writer pauses, post and trays for storing brushes, pots for washing brushes, saucers for testing brushes, brush-rests and paperweights.

Traditionally, Chinese writing runs from top to bottom of the page but today it may also go from left to right like the labels in the gallery. Characters have their origin in picture writing and each one stands for a word or part of a word. In some cases (eg wood, forest, child) the character makes a picture that relates to its meaning.

Many thousands of characters, each of between one and twenty-four brushstrokes, make up the Chinese written language. Each character has to be memorised. One needs to know about 7000 to read a newspaper, and a highly literate person might know 16000. Writing in red is used on auspicious occasions.