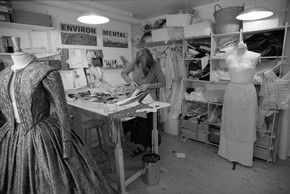 Theatre costume makers translate two-dimensional designs into fabric, decoration and trimmings.This requires not just practical cutting and sewing skills but also imagination and ingenuity and the best makers are able to maintain a designer’s personal style while reflecting their own individuality. Many designers establish a special relationship with a particular maker; some designers are around throughout the making process. Others, after initial discussions, give the makers a free hand.

Makers usually specialise - perhaps in fantasy dress, tailoring, tutus, animatronics or period costume. Even national subsidised companies who have their own production and maintenance workshops (such as the RSC, the RNT or Royal Opera House), may commission specific costumes from independent studios. Often these will be for leading performers. 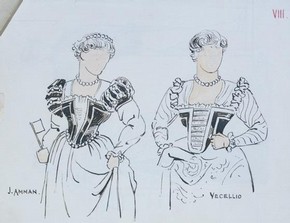 Costume design for Portia in William Shakespeare’s 'The Merchant of Venice'. Museum no. 2006AW2342

Once the designs have been accepted and each role cast, a wardrobe supervisor is appointed to co-ordinate the various elements of the production process. Working closely with the designer, they decide how to make the costumes within a given budget, what materials will be used, who will make them and whether any costumes can be hired, reused from ‘stock’ or even bought from the high-street.

A flat design on a sheet of paper has to be translated into a full costume on a human body, and makers often need to ask questions in order to interpret the designer's vision. John Cowell, costume and textile painter, explains: ‘There are very few (designers) who know what something is ultimately going to look like - they have done the drawings and our job is to coax as much information out of them as possible to be able to do as much as possible' 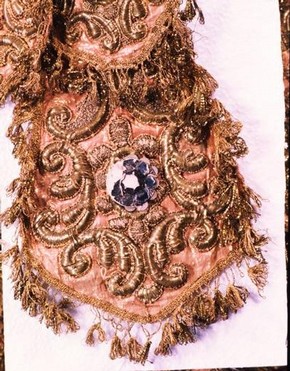 Most of the time the maker will get a reproduction, and not the original design so the maker has to know which elements of the design are intentional: 'You ask questions like - does the texture of the actual paper contribute to the design, and if it does we’ve got screens that print the texture of the paper all over the fabric before we put the design on'.

This questioning can also extend to the specifics of colour: '...a red can actually be built up out of four different colours, one laying over the other and it makes for a much more interesting fabric. The things that are exciting require analysis and a building up of layers and so on.'

Once the design has been developed into a 3-D form, the costume must be fitted to the form of the actor who will be wearing it. At the first fitting the designer checks the proportion, silhouette, hang and fit, after which the costume may need to be reconstructed. At the second fitting, trims and decorations are finalised according to the wearer’s particular figure, further adjustments may then be made after the costume has been worn in rehearsal.

Fittings can be fraught and some stars have been known to rip a costume apart if they are not satisfied. Designers get to know the performers who have legitimate complaints about a costume and those who are just being vain! 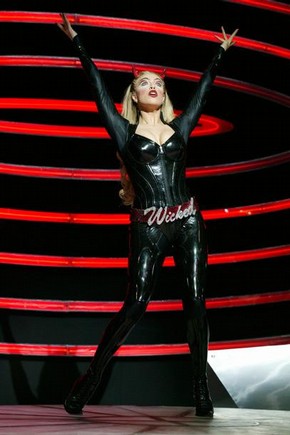 Every costume must satisfy the wearer. It must be comfortable and reflect the character the actor has been building in rehearsal. It must not restrict movement or breathing. Sometimes wearers have loathed their costumes.

In opera and dance, where productions have several casts, later performers may dislike the design or it may simply not suit them. The great international opera singers often travelled with their own costumes: in 1967 Luciano Visconti directed ‘La Traviata’ at the Royal Opera House in a black and white 1890s setting but one diva insisted on wearing her own costume and sang the lead in a mid-19th century pale blue crinoline.

Sometimes part of the costume is discarded as impractical in performance - hats in ballet are particularly likely to disappear after the first night.